For years, there had been whispers. Rumors swirled; stories exchanged. It wasn’t a secret, but it also wasn’t openly discussed, adding to a legend almost too incredible to believe.

Yet those who knew the truth wanted it out.

Tell everyone our story, they said, about the brains in the basement.

As a child, Lise Søgaard remembers whispers, too, though these were different – the family secret kind, hushed because it was too painful to speak it out loud.

Søgaard knew little about it, except that these whispers centered on a family member who seemed to exist solely in one photograph on the wall of her grandparent’s house in Denmark.

The little girl in the picture was named Kirsten. She was the younger sister of Søgaard’s grandmother, Inger – that much she knew.

“I remember looking at this girl and thinking, ‘Who is she?’ ‘What happened?’” Søgaard said. “But also this feeling of a little bit of a horror story there.”

As she grew into adulthood, Søgaard continued to wonder. One day in 2020, she went to visit her grandmother, now in her mid-90s and living at a care home in Haderslev, Denmark. After all that time, she finally asked about Kirsten. Almost as if Inger had been waiting for that very question, the floodgates opened, and out poured a story Søgaard never expected. 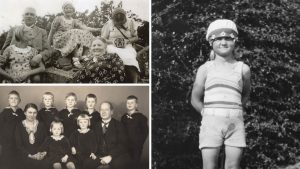 Kirsten (top center) and her sister Inger (bottom left) on a family outing with their aunt, uncle and cousin. Lower left: The Abildtrup family in the early 1930s. Kirsten, center left holding her mother’s hand, was the youngest of seven children. Right: The photo of Kirsten that hung on the wall and first caught Søgaard’s attention as a young girl.

Kirsten Abildtrup was born on May 24, 1927, the youngest of five brothers and her sister, Inger. As a child, Inger remembers Kirsten as quiet and smart, the two sisters sharing a close bond. Then, when Kirsten was around 14 years old, something began to change.

Kirsten experienced outbursts and prolonged bouts of crying. Inger asked her mother if it was her fault, often feeling that way because the two girls were so close.

“At Christmas, they were supposed to go on a visit to some family members,” Søgaard said, “but my great-grandmother and father, they stayed home and sent all of their children away except for Kirsten.”

When they got back from that family visit, Søgaard said, Kirsten was gone.

It was the first of many hospitalizations, and the start of a long and painful journey that would ultimately end in Kirsten’s death.