Trump Mocks Disabled People: One false allegation that Trump made fun of a disabled reporter turned into a generalization. Trump being funny on stage was turned into a fake allegation by the media. Read this article with videos and explanation to disprove this myth. Just remember three points: 1) the disabled reporter does not talk in a strange way. 2) Trump used the same kind of body language and change in voice to imitate many others, including Ted Cruz. It’s just Trump being funny and goofy. 3) Trump never even met that reporter. 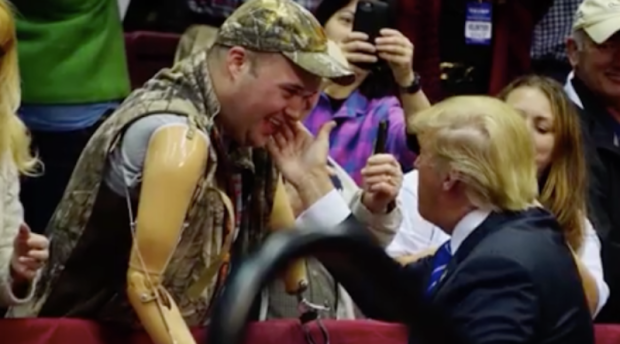 Trump Violated Trade Embargo With Cuba: Fact is that in 1998, everyone thought that the US would resume normal relations with Cuba. Many Fortune 500 companies sent their representatives to Cuba to explore options. Trump paid a consulting company about $70,000 to do the same. It was perfectly okay for the consulting company to do that IF they had proper license. If they didn’t, it was not Trump’s fault. (It’s like you getting a cab and the cab driver had expired registration).

Trump University Fraud: Trump University had more than 97% approval rate from its former students. When the housing market crashed, obviously the students couldn’t make a career out of real estate for a couple of years. If people could sue colleges and workshops for failed job opportunities, there will be endless lawsuits

Trump Bribed District Attorneys to Stop Lawsuits: If there was a quid pro quo, Trump was the victim here. If someone from the DA office approached Trump and said, “Wink, wink, there is no real case here, but the DA would appreciate your help in their campaign,” then Trump was being blackmailed. The DA should be the one who should be investigated.

Trump Didn’t Pay Taxes for 20 Years: Exaggeration and speculation. Of course, Trump paid plenty of taxes – state, sales, estate, property etc. And, of course, everyone uses deductions. In 2014, more than 1 million Americans used the exact same deduction as Trump might have used. Read my blog post debunking this silly assertion.

Trump Called Mexican “Rapists”: of course, he didn’t. He was talking about illegal immigration and the problems associated with it. When someone says, “America has a rape culture,” nobody loses their head. It doesn’t mean that every American man is a rapist.

Trump Said Blacks Are Lazy: This is an assertion by one guy who is a former employee (John R. O’Donnell). No proof or evidence or corroboration. The guy wrote a book in 1991 and anything sensational would obviously help. Here is a video of black leader Jesse Jackson awarding a prize to Trump in 2000 for “helping the black community for 30 years.” In the social media, Trump has a lot of support from the African Americans. Oh, and Trump’s powerful campaign spokesperson (Katrina Pierson) is a black woman!

Trump Attacks Miss Universe for Being Overweight: Alicia Machado won the Miss Universe in 1997 and gained a lot of weight. She was so fat that she was losing sponsorship! Kellogg took her off the Special K cereal box. Everyone was making fun of her. Even CNN called her “Miss Expanding Universe.” Yeah, the same media that now cries “sexism”! BTW, watch this video and see how supportive and kind Trump was at that time. Trump could have fired her since but stayed with her and helped her. Being a model and complaining about body requirement is ridiculous. This crazy woman also has a lot of dark history, including threatening to kill a judge and being romantically involved with one of the biggest drug kingpin in Mexico.

Trump Wants to Torture People: He was talking about waterboarding and other measures for suspected terrorists. When Bush did that for 8 years, very few people complained. BTW, why do you think Obama hasn’t closed Guantanamo? It’s certainly illegal. For those living naive lives, yes, the U.S. tortures all the time in CIA prisons around the world.

Trump Wants to Ban/Deport Muslims: He said “stop Muslim immigration TEMPORARILY.” Even Obama stopped the refugee program temporarily in 2011 when intelligence officials suspected that terrorists were sneaking in along with refugees. Read my blog post on why Trump’s idea for a temporary refugee ban is a good one. Also, see what’s happening in Europe. Here are some facts revealed in the latest Wikileaks. John Podesta (Hillary Clinton’s campaign manager who pretty much runs everything) got this Intelligence-report from Europe, but no politician would reveal this to the public: 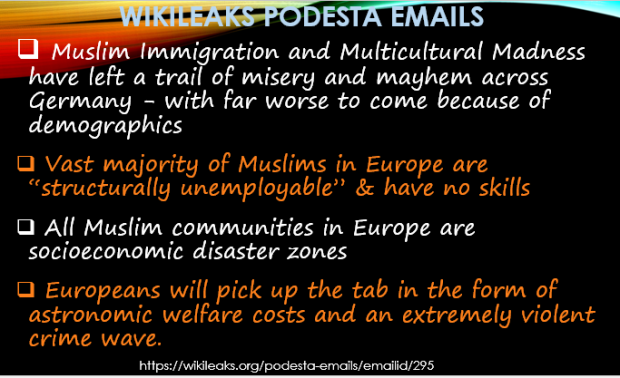 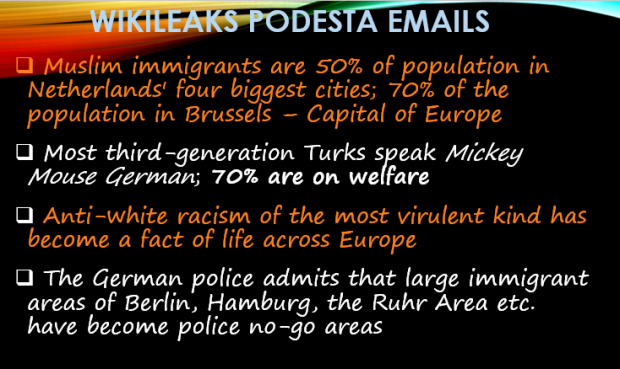 Trump Discriminated Against Blacks in 1973 in Housing Rentals: First of all, Trump or his family business was never found guilty of anything. Second, it was 43 years ago, for God’s sake! Donald Trump was only 20 and whatever decisions made were probably made by his dad and other business partners. Plus, things were very different back then — blacks were really poor, races didn’t mingle very well, and it’s possible that many white tenants would leave the building if too many blacks lived there. Again, this is just dirty politics.

Trump Incited Violence in his Rallies: If you have seen the videos from Project Veritas, you would see that the Democrats were behind this whole operation. People got paid to go Trump rallies and start fights. Sometimes they used homeless and mentally ill people. It even has a name – “bird dogging.” There have been at least four undercover investigations so far. Here is video #1: Rigging the Election. It’s shocking and please watch all the four videos, if you can (video 2, video 3, video 4). The main guy in the video, Robert Creamer, shows up in Wikileaks emails (where co-ordinates with DNC and Hillary Clinton’s campaign) and he has also visited the White House more than 300 times in the last eight years!