A man climbed on top of the roof of a La Puente home and wouldn’t come down for several hours Tuesday until an 83-year-old resident threw him off, according to bystander video of the incident.

The man had refused to budge for at least five hours despite demands from deputies and a crisis negotiator, said Sgt. David Cortinas of the sheriff’s Industry station. He said the man was taken to a hospital for psychological evaluation after sheriff’s deputies took him into custody.

At about 12:30 p.m., about an hour and a half after the incident ended, Cortinas said the resident who got involved in the standoff had “escorted” the man off the roof, saying he also had few details about the incident.

But cell phone video taken by resident Ashley Wrenn showed the resident, who she identified as her 83-year-old grandfather, Wilford Burgess,approaching the intruder on the roof, grabbing him and shoving him off.

“My grandfather was so upset. (He) told him, ‘You need to get down and off my roof,’” Wrenn said in a telephone interview.

Once he landed on the ground, she said the man damaged her mother’s car.

“It was a crazy morning,” she said.

The incident started when the sheriff’s station got a call from someone at 6:34 a.m. saying she or he was being followed near Nelson and Orange avenues, Cortinas said.

When deputies arrived at the scene, they saw a man jumping from roof to roof. 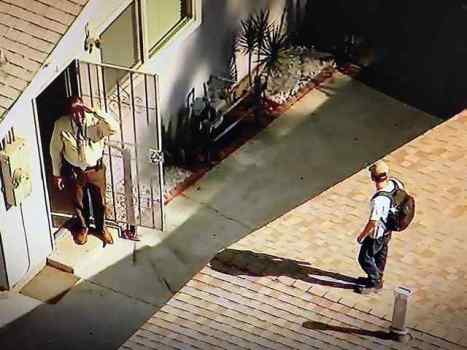 A man climbed on top of the roof of a home in La Puente early on Sept. 12, 2017 and wouldn’t come down, sheriff’s officials said. A resident threw him off the roof. The man was taken to a hospital to be evaluated by mental health professionals. (Photo courtesy of KABC-TV)

The man ended up on a roof in the 14100 block of Beckner Street. Crisis negotiators were called in to help get the man down.

Wrenn said she woke up around 7 a.m. and heard deputies yelling at someone. She said she heard them saying, “we know where you are. We can see you.”

She said she and her sister could hear the man stomping on the roof and running.

A crisis negotiator tried to convince the man to come down, she said. Wrenn said she also talked to the man.

“I told him we don’t want him hurt, just want him off the roof,” she said.

“So he jumped back on our house,” she said.

The incident ended around 11 a.m.

“My neighbor Albert got a ladder. My grandfather climbed the ladder quick. He pushed the guy to a corner of the roof and threw him off the roof,” Wrenn said.

She estimated the cell phone video was about 16 minutes which she edited out with an app.