By Christopher Monckton of Brenchley

In November 2015, just before the faithful gathered around their capering, gibbering witch-doctors and shamans in Paris for the New Superstition’s annual festival of thanks and praise, hugs and back-slapping, the Inconvenient Pause lengthened to 18 years 9 months. One-third of Man’s entire influence on climate since the Industrial Revolution had occurred since February 1997, yet on the then RSS dataset the 225 months since that month had shown no global warming at all (Fig. 1).

Figure 1. The least-squares linear-regression trend on the RSS version 3.3 satellite monthly global mean surface temperature anomaly dataset showed no global warming for 18 years 9 months since February 1997, though one-third of all anthropogenic forcings had occurred during the period of the Pause.

The accidental delegate from Burma had provoked shrieks of impotent fury from the congregation during the final benediction in Qatar in 2012, when he had said the Inconvenient Pause had endured for 16 years. Almost three years later, the Pause was almost three years longer. Senator Ted Cruz, chairing a Senate committee on global warming, waved Fig. 1 at the “Democrats” in the Chamber, to their discomfiture.

Then came the naturally-occurring el Niño of 2015/2016, ending the Pause. But there stood the Pause, still on the record-books, a standing indictment of the profiteers of doom and their inept climate models’ half-baked but overcooked predictions of rampant warming followed by a lurid catalogue of plagues of which the Psalmist at his most excitable would have been proud – except that they did not occur.

At the time I made a prediction of my own. I said that Dr Karl sMears of RSS, whose dataset had shown the Inconvenient Pause but who publicly derides those of us who ask questions about the Party Line as “denialists”, would soon allow the Party to prevail upon him to announce that the Inconvenient Pause was a mistake and that he would thereafter airbrush it away by some a of statistical prestidigitation.

Sure enough, the very next month he announced that the RSS dataset was going to be revised. Version 3 was no longer Politically Correct. All hail Version 4, which has recently become available. To see the extent of the tampering – er, make that “revision to allow for the previously-unheard-of phenomenon of orbital decay in the satellites”, Comrade – I plotted the 18 years and 9 months of temperature data from February 1997 to October 2015 using the new RSS data. Fig. 2 is the result.

Hey presto! No more Inconvenient Pause! All gone! Vanished into thick air! Just like that! Amazing! Zowee! Look! A quarter of a degree of global warming where there was none before! It’s worse than we thought!

Except that it isn’t. In 1990 the IPCC had predicted global warming from 1990 to 2025 at a rate equivalent to 2.8 K/century. But the RSS warming rate over the 18 years 9 months of the Airbrushed-Out Pause, according to the new and exciting data approved by the Politburo, is equivalent to less than half of IPCC’s originally predicted central rate.

We Want More Orbital Decay, And We Want It NOW! A rate of warming equivalent to little more than 1 degree per century is not enough. The Party has published many books saying there will be 6 degrees of warming, and some papers predicting up to 13 degrees. The RSS dataset still does not conform to the Party Line.

Now, one might think that RSS, an outfit whose sole task is to gather data from satellites, would know something about – er – as it were – satellites. These days, it’s not particularly difficult to adjust for orbital decay in real time using the GPS satellites, which by their nature must constantly correct themselves for it.

But the RSS team would now like us to believe they made no adjustments for orbital decay until recently, so that the Pause was really – really and truly – cross my heart and hope to die – trust me, I’m a climate scientist with a Party badge an’ all – an artefact of the slow decline in the altitude of satellites in orbit. As we say down the pub, “Pull the other one, squire – it’s got bells on.”

One might also think that the journal that published the sMears paper radically revising one of the two satellite global-temperature datasets would have taken the trouble to get the controllers of the other satellite dataset – John Christy and Roy Spencer of UAH – to peer-review it.

Roy Spencer had predicted the apparat would not do that. He was right. The apparat didn’t. John and Roy have dared to question the Party Line – politely, scientifically, and continuously. Therefore, they are Unpersons who do not – or, even if they do, should not – exist. Only one viewpoint is permissible – the Party Line. So they must not be consulted but insulted (and even shot at).

The orbital-decay ploy is not even new. Some years ago, while a leading climate scientist was putting the finishing touches to a paper showing a low climate sensitivity, he sent me a copy of the draft and I noticed that, since he had begun work on it, a new series of the satellite data on which he had hoped to rely had been published, making large ex-post-facto adjustments for “orbital decay” – which, however, proved insufficient to undermine the draft.

Frankly, it’s time for this unprincipled Humptidumptification of climate science to stop. The data are rewritten again and again until they mean whatever the Politburo want them to mean. Numerous climate datasets, now including the RSS dataset, have been tortured and contorted so often to force them into ever-less-plausible conformity with the Party Line that neither they nor the Party Line any longer possess any objective credibility whatsoever.

Let us end by looking at what really happened to global temperature during the Inconvenient Pause. Fig. 3 shows the UAH curve for the same period as Figs 1, 2.

Figure 3. The UAH record over the 18 years 9 months of the Inconvenient Pause

Looks pretty close to a Pause to me. Down the memory-hole with it, Comrades!

Where stands the truth? You pays your money and you makes your choice: but, after the numerous alterations to the tamperature datasets, three points are clear.

First, on most of the global-temperature datasets, much of the warming of recent decades was not evident in the raw data and has been created by ex-post-facto manipulation of the data – whether for good reasons or bad. That raises the legitimate question whether our observational capacity is sufficiently reliable and sufficiently well resolved to provide useful illumination of the question whether our very small perturbation of a very large atmosphere will have a very small or a very large influence on future global temperature.

Secondly, no Inconvenient Pause will ever again be allowed to show in most datasets, even if there is one. Some parameter or another will be Karlamelized after the event, and numbly acquiescent pal-reviewers will check it not for scientific merit but simply for conformity to the Party Line, whereupon they will wave the paper through.

Thirdly, the rate of global warming, even after the ever-upward temperature tampering of almost all datasets (only UAH has gone the other way), is a lot less than predicted. RSS, having previously showed just 0.36 K global warming since 1990, now shows 0.52 K, near-coincident with IPCC’s least prediction made in 1990, but still well below its central prediction and a very long below its high-end prediction. In reality, even after the tampering, it’s a whole lot less bad than we thought.

As Fig. 6 shows, even after all the tampering, the mean warming rate among two terrestrial and two satellite datasets continues to be somewhat below IPCC’s least medium-term prediction made in 1990. Yet IPCC, though in its Fifth Assessment Report it has near-halved those medium-term predictions, has unaccountably left its longer-term predictions unaltered: for otherwise it would be apparent to all that the real-world temperature data are turning the climate scare into a non-event.

vs. IPCC medium-term warming predictions in 1990.

Regular readers will notice that I have been largely absent from these pages in recent months. This is partly owing to illness, and partly because I have had my head down working on a paper that identifies the chief reason why the rate of warming shown by the untampered data is so much less than what IPCC had predicted with “substantial confidence” in 1990.

The draft paper is now out for review. If the reviewers find sound reasons for rejecting it, I shall not trouble you with it further. But my team has gone to uncommon lengths to verify our conclusions, including consulting the world’s foremost expert on the application of the relevant physical formulism to the climate and getting our understanding of the theory confirmed empirically by experiments conducted at a government laboratory.

If our paper is published, and if the wider scientific community finds little of substance to cavil at, it will mark the end of the global-warming scare.

G20: Climate Change Not a Key Objective for Britain 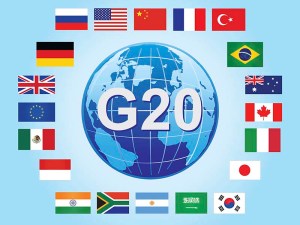 German Chancellor Angela Merkel’s efforts to present a united front against President Trump’s climate skepticism took a blow today, with the British government admitting that climate is not on their list of key objectives for the G20 conference.

The Prime Minister has been accused of a “dereliction of duty” after revealing that climate change has been excluded from her top priorities at this weekend’s G20 summit.

Theresa May left it off her list of key objectives despite the issue likely becoming the central task of the meeting of world leaders, following Donald Trump’s decision to quit the Paris Agreement on climate change.

… a senior UK Government official revealed the British G20 delegation’s four objectives would not include the issue.

Instead, Ms May will focus on cutting off terrorist financing, global migration, modern slavery and “making the global economy work for everyone”.

“With Theresa May set for a bilateral with Donald Trump she should be putting action on climate change at the top of the agenda – and pressing the US President to reverse his disastrous decision to pull out of the Paris Agreement.

British Prime Minister Theresa May was left battered by a recent UK election which her party almost lost. She desperately needs some good news to try to win back some electoral support. A G20 win for British jobs might help restore her sagging popularity.