via The Herald Sun

Politicians mad with global warming theory are destroying our economy and hurting the poor.

They have driven cheap coal-fired power out of business and made electricity a luxury the very poor cannot afford this winter – and all this sacrifice will make zero difference to the climate:

Australia is entering the “realm of third world countries” with residential power disconnections rising by as much as 140 per cent in six years and the average household paying more than double what it did a decade ago to keep the lights on.

Escalating consumers’ pain, electricity prices increased up to 20 per cent last weekend and Victoria yesterday introduced emissions restrictions that would prevent even the cleanest coal-fired power. 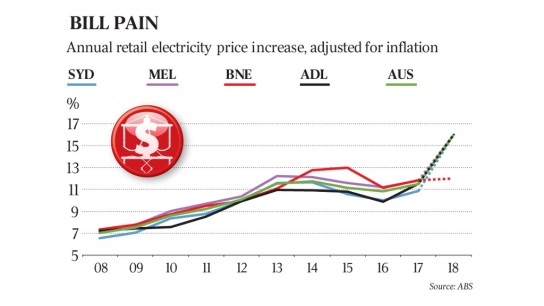 This is one of the greatest disgraces of public policy. What makes it worse is that some of the politicians responsible have known that the global warming scare is wildly exaggerated and most know that dismantling our coal-fired power stations actually makes no difference anyway.

This is close to criminal.

WHILST the regressive, green pandering, unreliable-energy-obsessed Australian government blows up its last remaining coal-fired power stations, the rest of the sane/smart World secures its real-energy future with a massive ramping up of cheap, efficient and reliable baseload coal-fired power technology…

1,600 new coal-fired power plants are planned or under construction in 62 countries.

When China halted plans for more than 100 new coal-fired power plants this year, even as President Trump vowed to “bring back coal” in America, the contrast seemed to confirm Beijing’s new role as a leader in the fight against climate change.

But new data on the world’s biggest developers of coal-fired power plants paints a very different picture: China’s energy companies will make up nearly half of the new coal generation expected to go online in the next decade.

These Chinese corporations are building or planning to build more than 700 new coal plants at home and around the world, some in countries that today burn little or no coal, according to tallies compiled by Urgewald, an environmental group based in Berlin. Many of the plants are in China, but by capacity, roughly a fifth of these new coal power stations are in other countries.

Over all, 1,600 coal plants are planned or under construction in 62 countries, according to Urgewald’s tally, which uses data from the Global Coal Plant Tracker portal. The new plants would expand the world’s coal-fired power capacity by 43 percent.

All that pain, for ABSOLUTELY NO CLIMATE GAIN!