In several long-term experiments with the KOSMOS mescosms, the BIOACID members have investigated the impact of ocean acidification on marine oceosystems. Credit: Maike Nicolai, GEOMAR (CC BY 4.0)

More “green” rent and grant adjusted “research” ordered to be ready for the next climate-church meeting in Bonn by Greenpeace / WWF aka IPCC (and as always, totally disconnected reality).

Experiments and analyses carried out by more than 250 scientists from 20 German institutions clearly indicate that ocean acidification and warming, along with other environmental stressors, impair life in the ocean. A brochure summarises major outcomes of the project for policymakers and the public. Members of the project Biological Impacts of Ocean Acidification (BIOACID) will also be present at the United Nations climate change conference COP23 in Bonn.

As a gigantic carbon sink, the ocean absorbs about a third of the carbon dioxide (CO2) released into the atmosphere by human activities. But when absorbed by seawater, the greenhouse gas triggers chemical reactions causing the ocean to acidify. Ocean acidification affects ecosystems and important benefits the ocean provides to humankind. This includes the regulation of the Earth’s climate, food provision, recreation and biodiversity as a condition for intact and functioning ecosystems.

“Humans need to see themselves as part of a global system and understand the many ways we depend on the ocean and its services. Because everyone in this global community will be affected by climate change, it will be for our own benefit if we manage to reduce carbon dioxide emissions in such a way that global warming is limited to less than 2 degrees Celsius”, says Prof. Ulf Riebesell, marine biologist at GEOMAR Helmholtz Centre for Ocean Research Kiel and coordinator of BIOACID. “The future of this planet depends on us. Wouldn’t it be a great achievement if the anthropocene, the age of human dominance on Earth, goes down in history as an era of rethinking and changing behaviour?” 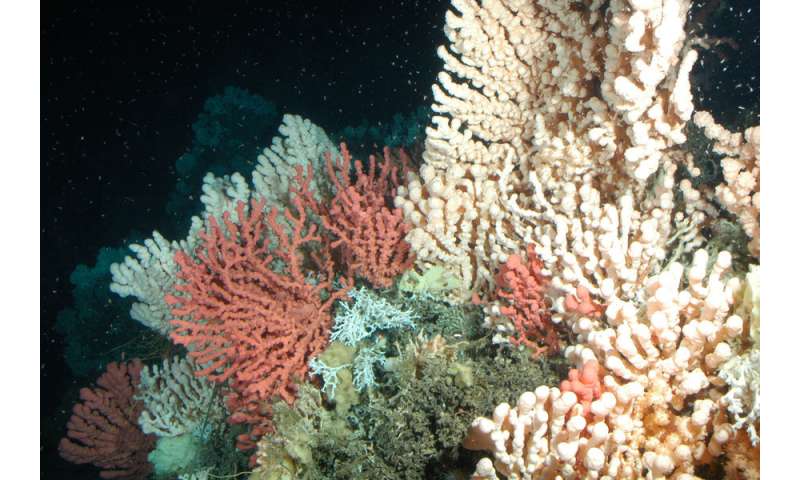 According to Hans-Otto Pörtner, co-coordinator of BIOACID, all countries would need to reduce their carbon dioxide emissions drastically by the middle of this century if they wish to reach the Paris climate targets. “The current world climate report indicates clearly that net-zero emissions are a precondition for limiting global warming to well below 2 degrees Celsius. However, reducing CO2 emissions alone may not be sufficient. Net removal of CO2 from the atmosphere would have to contribute. This is already technically possible, but the challenge is to develop and implement the respective technologies at a larger scale. The later the emission reductions start and the longer this process takes, the more difficult and costly it becomes to stay in line with the Paris agreement.” 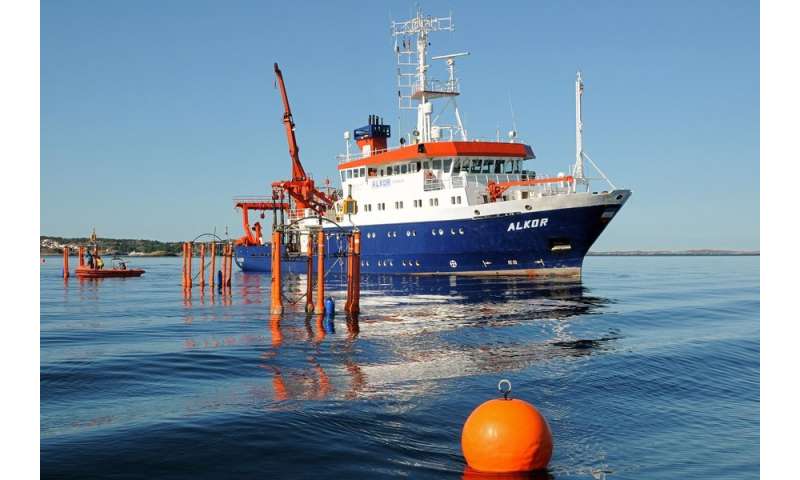 The Kiel research vessel ALKOR with the KOSMOS mesocosms in the Gullmar Fjord, Sweden. Credit: Maike Nicolai, GEOMAR (CC BY 4.0) 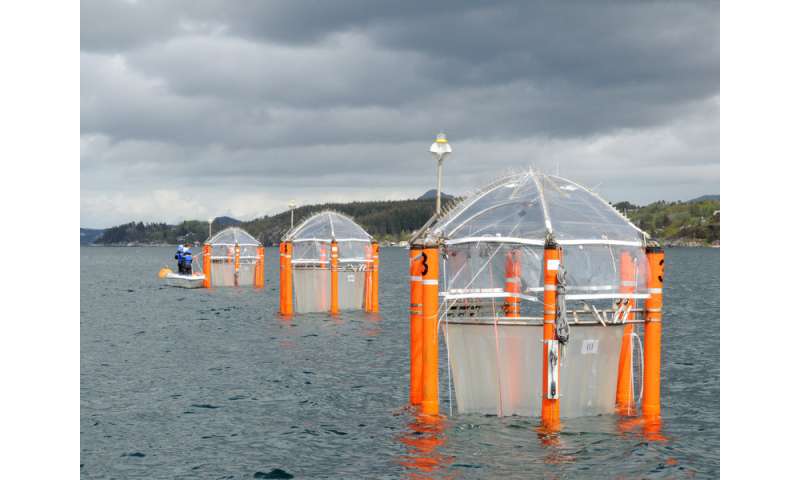 In 2015, an experiment with the KOSMOS mesocosms was conducted in the Raunefjord, Norway. Credit: Maike Nicolai, GEOMAR (CC BY 4.0)

From the way media and climate scientists portray the global air temperature this past year, you’d think there was only one place to go – up. For example, Gavin is holding on to hope:

Next year will be interesting.

However, oceans rule the temperature of the planet, and as this most recent SST shows, there’s a lot of cool water and a clear signature of La Niña shaping up off the coast of South America:

HadSST is generally regarded as the best of the global SST data sets, and so the temperature story here comes from that source, the latest version being HadSST3.

The chart below shows SST monthly anomalies as reported in HadSST3 starting in 2015 through September 2017.

The August bump upward was overcome with the Global average matching the lowest level in the chart at February 2015.  September NH temps almost erased a three-month climb; even so 9/2017 is well below the previous two years.  Meanwhile SH and the Tropics are setting new lows for this period.  With current reports from the El Nino 3.4 grid sector, it seems likely October will go even lower, with downward moves across all oceans.

Note that higher temps in 2015 and 2016 were first of all due to a sharp rise in Tropical SST, beginning in March 2015, peaking in January 2016, and steadily declining back to its beginning level. Secondly, the Northern Hemisphere added two bumps on the shoulders of Tropical warming, with peaks in August of each year. Also, note that the global release of heat was not dramatic, due to the Southern Hemisphere offsetting the Northern one. […]

We have seen lots of claims about the temperature records for 2016 and 2015 proving dangerous man made warming.  At least one senator stated that in a confirmation hearing.  Yet HadSST3 data for the last two years show how obvious is the ocean’s governing of global average temperatures.

NOAAgate: how ‘ocean acidification’ could turn out to be the biggest con since Michael Mann’s Hockey Stick 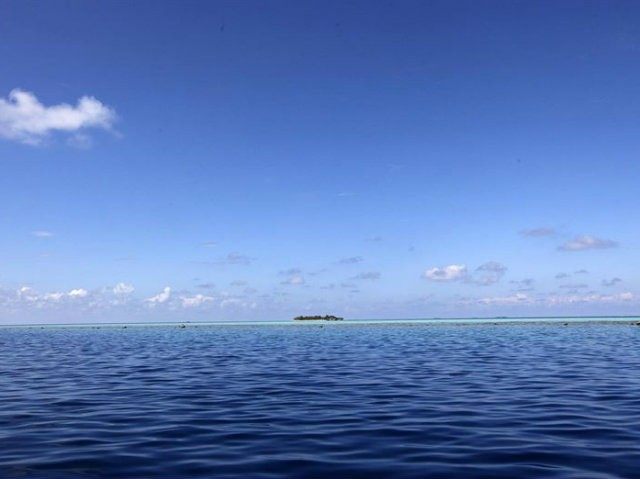 Christmas has come a couple of days early for climate sceptics, in what may well prove to be one of the biggest blows to the Global Warming religion since Climategate.

This time the pillar of green faith which has been rudely dismantled by sceptical investigators is an alleged phenomenon known as “ocean acidification.”

For years this has been touted by environmentalists as possibly the greatest threat to the planet after “global warming.”

According to Jane Lubchenko, the head of the National Oceanic and Atmospheric Administration (NOAA), it is “climate change’s equally evil twin” because of the disastrous consequences it may have for everything from the navigational systems of spawning salmon to the health of coral reefs.

Ocean acidification is said to be caused when excess atmospheric carbon dioxide is absorbed by the sea, reducing its pH levels to make it more acidic.

But, as Watts Up With That reports new evidence unearthed by an inquisitive graduate student suggests that “ocean acidification” may be a scientific fraud to rank with the great “man-made-global warming” scare.

At the centre of the scandal is NOAA, the US federal scientific agency which measures and researches changes in the oceans and atmosphere, and which maintains one of the temperature datasets used to measure “global warming.”

One of NOAA’s departments – the Pacific Marine Environmental Laboratory (PMEL) – also happens to be one of the mainstays of the alarmist narrative about “ocean acidification.”

A 2004 paper by two of PMEL’s senior oceanographers – Dr Richard Feely and Dr Christopher Sabine – is often cited in support of “ocean acidification” theory and is reproduced, in simplified form, at NOAA’s website.  It also formed part of testimony that Feely gave to Congress in 2010, again to the effect that increasing atmospheric CO2 is causing a reduction in seawater pH.

“The impacts of ocean acidification on shelled organisms and other animals could negatively affect marine food webs, and, when combined with other climatic changes, could substantially alter the number, variety, and health of ocean wildlife. As humans continue to send more and more carbon dioxide into the oceans, the impacts on marine ecosystems will be direct and profound.”

“The message is clear: excessive carbon dioxide poses a threat to the health of our oceans.”

However, it now seems that the paper’s certainty is at best misplaced, at worst outright dishonest. Not unlike Michael Mann’s discredited Hockey Stick graph it appears to depend on cherry-picked data and misleading projections in defiance of real-world evidence.

The alleged fraud was uncovered by Mike Wallace, a hydrologist with nearly 30 years’ experience now working towards his PhD at the University of New Mexico. While studying a chart produced by Feely and Sabine, apparently showing a strong correlation between rising atmospheric CO2 levels and falling oceanic pH levels, Wallace noticed that some key information had been omitted.

Mysteriously, the chart only began in 1988. But Wallace knew for a fact that there were oceanic pH measurements dating back to at least 100 years earlier and was puzzled that this solid data had been ignored, in favour of computer modelled projections. 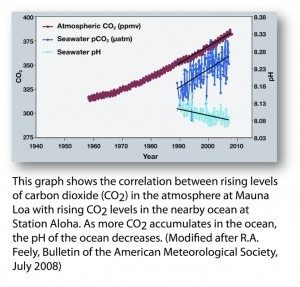 When Wallace emailed his query to Feely and Sabine, however, he found them less than helpful.

Sabine replied that it was inappropriate for Wallace to impugn the “motives or quality of our science” and warned that if he continued in this manner “you will not last long in your career.” Having provided Wallace with a few links – all of which turned out to be useless – he concluded his email by saying “I hope you will refrain from contacting me again.”

This response, again, calls to mind the behaviour of Michael Mann in response to queries from Steve McIntyre about where to find the raw data for his Hockey Stick. Mann was similarly obfuscatory, rude and dismissive.

Undeterred, Wallace eventually got hold of the instrumental records which Feely and Sabine had chosen to exclude from their graph of doom and plotted a time series chart of his own, covering the period from 1910 to the present.

His results were surprising. What they suggest is that global acidification is a figment of Feely’s and Sabine’s imagination: there has been NO reduction in oceanic pH levels in the last century. 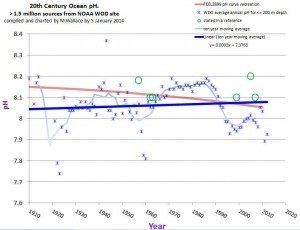 Wallace says: “Oceanic acidification may seem like a minor issue to some but, besides being wrong, it is a crucial leg to the entire narrative of ‘human-influenced climate change’.”

He adds: “In whose professional world is it acceptable to omit the majority of the data and also not disclose the omission to any other soul or Congressional body?”

More about (Man Made) ocean acidification (which doesn’t exist)

.. and even a few more: https://wattsupwiththat.com/?s=ocean+acidification