San Francisco City Attorney Dennis Herrera (L) and Mayor Ed Lee during a news conference where they announced the filing of a federal lawsuit against President Donald Trump and his administration at City Hall in San Francisco, California, U.S., January 31, 2017. REUTERS/Kate Munsch – RC19338CD2E0

A group of 15 Republican states attorneys general filed an amicus brief in a lawsuit brought by San Francisco and Oakland against major oil companies, asking a federal court to dismiss the case.

By using the courts to punish oil companies, the AGs, led by Indiana Attorney General Curtis Hill’s office, argue California cities “are attempting to export their preferred environmental policies and their corresponding economic effects to other states.”

“California’s attempt to regulate out-of-state production of fossil fuels and by suing producers with common law cause of action implicates the constitutional doctrine against extraterritorial regulation,” the AGs argue in their amicus brief filed Thursday. “This is yet another reason to reject Plaintiffs’ novel theory of liability.”

The suits, largely handled by trial lawyers on a contingency fee basis, rest on public nuisance and trespassing claims, which have sometimes been applied to pollution issues. However, legal efforts have questioned the logic of applying nuisance claims to a global phenomenon, like global warming.

Lawsuits against fossil fuels companies are also problematic for an obvious reason — their customers are the major source of emissions, not the companies themselves.

“Indeed, these public nuisance lawsuits are especially dubious, given that the oil companies did not by their sales emit any carbon dioxide into the atmosphere,” New York University law professor Richard Epstein noted in January.

“The dangerous releases came from many different parties, both private and public, including the municipalities bringing these lawsuits,” Epstein wrote.

“Courts have repeatedly ruled that manufacturers are liable for the damages their products cause, especially when they know in advance that their products, if used as intended, will cause that harm,” reads a blog post by the Niskanen Center, a D.C. think tank, which is representing Boulder and two Colorado counties.

However, U.S. District Court Judge William Alsup dismissed accusations brought by California cities that fossil fuel companies had engaged in a conspiracy to cover up global warming, at a March hearing.

The 15 states argue global warming is a question the courts are not equipped to consider. These are policy, not legal, questions, states argue.

“And even were that not so, the Supreme Court has already said that the Clean Air Act and related EPA regulations have displaced the federal common law” in a 2011 case,” the attorneys general wrote.

What’s Up with Chevron?

This post is outside of my standard dissection of the origins of the smear of skeptic climate scientists; the items I’ll be pointing out here today have no readily discernible connection with the ‘coal/oil corporate-paid lying shill scientists’ accusation. However, the question “What’s Up with Chevron?” as it pertains to that company’s action right before and during the recent ‘global warming tutorial courtroom hearing’ might still be worthwhile for objective reporters to ask, in light of the sheer worthlessness of the ‘coal/oil-paid lying shill scientists’ accusation, and the easily found abundance of science-based material questioning the ‘certainty’ of the idea about catastrophic man-caused global warming.

As ever, I leave the debate of pure science details to the science experts. I’m not a climate scientist. I’m not a lawyer, either, but that didn’t prevent me from being bewildered by the lawsuit maneuver reported in the LA Times‘s February 8, 2018 “Chevron fights California cities’ climate-change lawsuits with ‘creative lawyering’” news item, regarding Chevron’s action in the San Fransisco / Oakland global warming cases. To quote from the article:

If Chevron Corp. has caused climate change and needs to pay for its damage, so should pretty much every company that has ever explored for oil and gas near North America, as well as manufacturers of cars and equipment that burn fuel, plus consumers.

That’s Chevron’s response to lawsuits by San Francisco and Oakland, blaming “the nuisance of global warming” on decades of fossil fuel production. So Chevron turned around and sued Oslo-based Statoil, calling it “one of many” oil producers that should help foot the bill if the industry is found liable ….

Adding foreign companies to the litigation is a tactical maneuver to keep the dispute out of state court, where the cities have more favorable prospects, and force it into federal court, said Julia Olson, executive director and chief legal counsel for the environmental law group Our Children’s Trust, which isn’t involved in the case.

Why is there any need whatsoever for such a maneuver? Chevron and the other lawsuit defendants stand accused of knowing the science is settled but allegedly chose to mislead the public to the contrary. Surely Chevron’s people could argue that neither they nor their accusers have the science expertise authority to say what is settled, and even if that aspect of the case is not discussed, it’s up to the plaintiffs to prove that Chevron conspired to act dishonestly about the matter.

As we saw in the March 21 courtroom tutorial hearing, the judge was not impressed with one of the main bits of accusatory evidence about the ‘conspiracy,’ and the one Chevron attorney speaking at the hearing, Theodore Boutrous, had never seen the plaintiffs’ ‘conspiracy evidence’ before — which could actually undermine other lawsuits against energy companies.

Why didn’t Chevron go on the offense about this aspect of the case from the start?

Consider this comparison: if you ran a giant food company which produced a particular product for over a hundred years with no basic complaint against it beyond it not being a staple of a standard daily meal diet, and you found yourself accused in just the last 20 years of both knowing it was cancer-causing and paying dietitian experts to tell the public otherwise — despite the lack of irrefutable evidence of its harm and the total lack of credible evidence that you paid ‘shill experts’ to lie on your behalf — why would you suddenly capitulate to arguments against your product while not raising any concern about the corruption accusation hurled at you?

Perhaps a contributing part of this strange Chevron situation is found in who one of the other lawyers for Chevron is. From a Sacramento Bee article just one day before the Oakland judge’s tutorial hearing, it says the following: 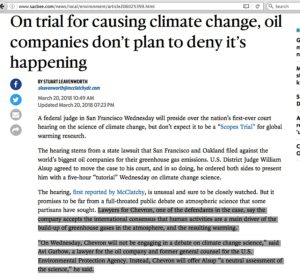 …Lawyers for Chevron, one of the defendants in the case, say the company accepts the international consensus that human activities are a main driver of the build-up of greenhouse gases in the atmosphere, and the resulting warming.

“On Wednesday, Chevron will not be engaging in a debate on climate change science,” said Avi Garbow, a lawyer for the oil company and former general counsel for the U.S. Environmental Protection Agency. Instead, Chevron will offer Alsup “a neutral assessment of the science,” he said.

Specifically, the Obama-era EPA. About which, there’s an assortment of problems:

Garbow spoke on a number of issues, but the EPA’s renewed and increased commitment to environmental justice emerged as a clear priority.

On August 7, 2013, Avi S. Garbow was sworn in as General Counsel for the United States Environmental Protection Agency ….

So, with friends like that and an unmistakably pro-global warming position, why on Earth would Avi Garbow go to work for one of the sworn enemies of enviro-activists, a planet-wrecking fossil fuel company? Perhaps a hint is seen in the internet search results for his name combined with the name of his company right before the March 21 Oakland courtroom tutorial hearing. First, there’s the number of results overall, and second, all of the stories are about Chevron admitting global warming is man-caused, and none contain vicious portrayals of Garbow. By way of example, the far-left website CleanTechnica went out of its way to note Garbow’s pro-global warming work history, while a lowly commenter took it upon himself to suggest Garbow was an instrument of corporate-paid evil …. with an entertaining wish:

… i would love to see a hard hitting expose on how he could do such a thing; … Did he give any breaks to this company he was tasked with regulating who know he works for?

Perhaps another hint is seen in Garbow’s prophecy remark quoted by US News & World Report about the future of the global warming issue, which possibly portended the direction he thought he might take, post-Obama:

“This does not feel like we’re winding down – in many ways it’s the opposite,” Avi Garbow, general counsel at the Environmental Protection Agency, said in an interview in the spring. When it comes to litigation challenging climate rules under Obama, “the lawyers are going to be the ones to turn out the light.”

Is it actually Chevron turning out the ‘fossil fuel industry denial light’ about the certainty of man-caused global warming, or is it one solitary unmistakably pro-global warming lawyer nudging an entire company into the most inexplicable kind of politically correct appeasement to enviro-activists?

Skeptic climate scientist Dr Tim Ball explored the overall appeasement problem at this April 5, 2018 WUWT guest post. My focus is still on the origins and people surrounding the smear of scientists like him and others, but the least I can do in this situation is suggest that genuine objective reporters might uncover a huge story by asking why Chevron appears to be bizarrely snatching Defeat from the jaws of Victory when they could be instead vehemently questioning easily found problems surrounding IPCC climate reports while also demanding their accusers to produce any evidence which actually proves the fossil fuel industry conspired to withhold the truth.