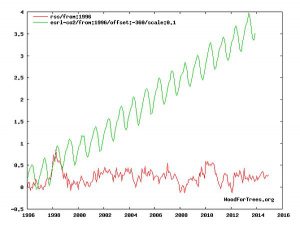 Relevance of this Research

The assumption of the existence of a “Tropical Hot Spot (THS){ is critical to all Three Lines of Evidence in EPA’s GHG/CO2 Endangerment Finding.

Stated simply, first, the THS is claimed to be a fingerprint or signature of atmospheric and Global Average Surface Temperatures (GAST) warming caused by increasing GHG/CO2 concentrations[1]. The proper test for the existence of the THS in the real world is very simple. Are the slopes of the three temperature trend lines (upper & lower troposphere and surface) all positive, statistically significant and do they have the proper top down rank order?

Second, higher atmospheric CO2 and other GHGs concentrations are claimed to have been the primary cause of the claimed record setting GAST over the past 50 plus years.

Third, the THS assumption is imbedded in all of the climate models that EPA still relies upon in its policy analysis supporting, for example, its Clean Power Plan – recently put on hold by a Supreme Court Stay. These climate models are also critical to EPA’s Social Cost of Carbon estimates used to justify a multitude of regulations across many U.S. Government agencies.

Objectives of the Research

The objective of this research was to determine whether or not a straightforward application of the proper mathematical methods would support EPA’s basic claim that CO2 is a pollutant. Stated simply, their claim is that GAST is primarily a function of four explanatory variables: Atmospheric CO2 Levels, Solar Activity, Volcanic Activity, and a coupled ocean-atmosphere phenomenon called the El Nino-Southern Oscillation (ENSO.)

The first objective of this research was to determine, based on the very considerable relevant and credible tropical temperature data evidence, whether or not the assumed THS actually exists in the real world.

The second related objective was to determine whether, adjusting ONLY for ENSO impacts, anything at all unusual with the Earth’s temperatures seemed to be occurring in the Tropics, Contiguous U.S. or Globally. It is a well-known meteorological fact that, other things equal, El Ninos lead to a global scale warming and La Ninas a global scale cooling, whose magnitudes are related to their ENSO strengths.

The third objective was to determine whether the rising atmospheric CO2 concentrations alone can be shown to have had a statistically significant impact on the trend slopes of often -publically -quoted temperature data.

It should be noted that in carrying out this research project, every effort was made to minimize complaints that this analysis was performed on so-called “cherry picked temperature data”. To avoid even the appearance of such activity, the authors divided up responsibilities, where Dr. Christy was tasked to provide temperature data sets that he felt were most appropriate and credible for testing the THS as well as the two other EPA Endangerment Finding hypotheses. All told, thirteen temperature time series (9 Tropics, 1 Contiguous U.S. and 3 Global) were analyzed in this research. The econometric analysis was done by Jim Wallace & Associates, LLC, and when completed, cross checked by the two other authors as well as seven reviewers.

Findings of the Research

These analysis results would appear to leave very, very little doubt but that EPA’s claim of a Tropical Hot Spot (THS), caused by rising atmospheric CO2 levels, simply does not exist in the real world. Also critically important, even on an all-other-things-equal basis, this analysis failed to find that the steadily rising Atmospheric CO2 Concentrations have had a statistically significant impact on any of the 13 critically important temperature time series data analyzed.

Thus, the analysis results invalidate each of the Three Lines of Evidence in its CO2 Endangerment Finding. Once EPA’s THS assumption is invalidated, it is obvious why the climate models they claim can be relied upon, are also invalid. And, these results clearly demonstrate – 13 times in fact – that once just the ENSO impacts on temperature data are accounted for, there is no “record setting” warming to be concerned about. In fact, there is no ENSO-Adjusted Warming at all. These natural ENSO impacts are shown in this research to involve both changes in solar activity and the well-known 1977 Pacific Climate Shift.

Moreover, on an all-other-things-equal basis, the research strongly implies that there is no statistically valid proof that past increases in Atmospheric CO2 Concentrations have caused the officially reported rising, even claimed record setting temperatures.

Finally, regarding the credibility of these research findings, the temperature data measurements that were analyzed were taken by many different entities using balloons, satellites, buoys and various land based techniques. Needless to say, if regardless of data source, the results are the same, the analysis findings should be considered highly credible.

There is no Greenhouse Effect