California is preparing to sue the Trump administration after the EPA moved Thursday to dramatically roll back Obama-era regulations allowing the state to determine vehicle emissions standards.

President Donald Trump’s proposal, if passed, would prevent California and the 12 states that follow the state’s strict standards from setting their own agenda on fuel emissions. Attorneys general from Massachusetts and New York are joining California AG Xavier Becerra’s lawsuit.

“The pollution we’re all seeing, certainly here in LA we see it every day, that pollution if fueling the death and destruction,” Becerra told reporters during a conference call, noting that fuel emissions are contributing to global warming, which he believes is causing wildfires.

“We have lead from the very beginning, and we will lead again when it comes to protecting the national standards for cleaner cars,” the Democratic AG added. The EPA and the Department of Transportation’s proposal caps fuel emissions at 2020 levels.

One of the attorneys general who is joining Becerra’s lawsuit argues the Trump administration’s decision is not based in real science. “It’s insane to make cars less efficient– the devastating impact this is going to have on public health,” Pennsylvania AG Josh Shapiro said in a press call.

Trump’s move is a full-on assault targeting a key component of his Democratic predecessor’s regulatory regime.

Former President Barack Obama raised the average fuel economy of automobiles to more than 50 miles per gallon within 10 years. California got permissions from the Obama administration to issue its own, higher emissions standards.

They require cars get 54.5 miles per gallon by 2025. The rules would cut 540 million metric tons of carbon dioxide emissions and save consumers money, officials estimated.

ARNOLD SCHWARZENEGGER: TRUMP ‘OUT OF HIS MIND’ IF HE THINKS HE CAN REMOVE CALIFORNIA’S EMISSIONS WAIVER

Arnold Schwarzenegger said that President Donald Trump is “out of his mind” if he thinks he can move forward with his plans to remove California’s emissions waiver.

“For 48 years — since one of my heroes, then-governor Ronald Reagan, requested it — California has had a waiver from the federal government to clean our own air,” the 71-year-old actor tweeted Thursday in response to Trump’s announcement that he will move to roll back Obama-era regulations that allowed the state to determine its own vehicle emissions standards. 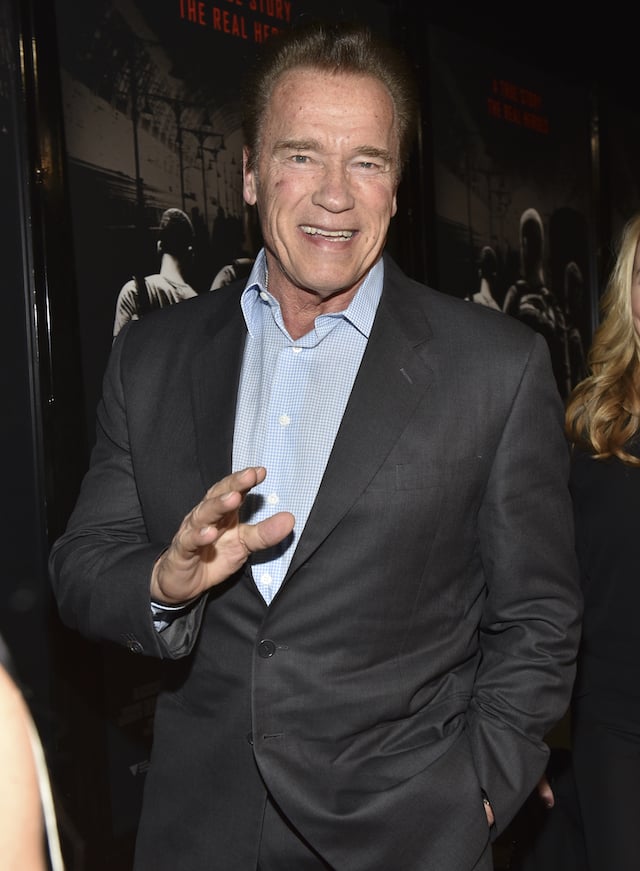 Former Governor of California Arnold Schwarzenegger arrives at the premiere of Warner Bros. Pictures’ “The 15:17 to Paris” at Warner Bros. Studios on February 5, 2018 in Burbank, California. (Photo by Rodin Eckenroth/Getty Images)

“If the President thinks he can win this fight, he’s out of his mind,” he added. “I am sick and tired of these fake conservatives who believe in states’ rights to make their own policies — as long as state policy is to pollute more.”

My statement on today’s stupid, fake-conservative policy announcement that no one asked for. pic.twitter.com/ojAhWTFpDM

“If you want to clean up your air, they throw federalism right out the window, I’ve had it with the so-called pro-business conservatives who ignore what actual industry leaders say is best for business,” he continued. “The car companies own lobbyist said they hoped the administration would ‘find a solution that continues to increase fuel efficiency standards.’”

“Let’s be clear: this is a stupid policy and no one asked for this,” the former governor of California shared. “Businesses prefer certainty — not policies that change with the whims of each new White House. I hope some conservatives with a conscience will act in Washington to defend California’s waiver based on these historic Republican values. But if not, I’d remind them that California has won this battle before. We will win again.”

The “Terminator” star has been very outspoken against the president over the last year and a half. Most recently, Schwarzenegger called Trump’s appearance at his press conference with Russian President Vladimir Putin akin to a “wet noodle.”

“President Trump, I just saw your press conference with President Putin, and it was embarrassing. I mean you stood there like a little, wet noodle — like a little fanboy,” the actor explained. “When are you going to ask him for an autograph or a selfie or something like that?”

“You literally sold out at this press conference our intelligence community, justice system and, worst of all, our country. You’re the President of the United States. You shouldn’t do that,” he added.

No one is preventing the industry to develop more fuel efficient engines, but it doesn’t have to be mandated through corrupt processes in order for special interest to milk the population.

Also notice, pollution and (Man Made) Global Warming is not the same (they call it “climate change” because everybody knows the climate is always changing, it’s called weather and it has absolutely nothing to do with the “Man Made” – part (which doesn’t exist).