HAPPENING NOW: Kavanaugh Hits Back at His Accuser in This Powerful Statement

Judge Kavanaugh has come out swinging against the absurd and disgusting allegations that he attempted to rape and “nearly killed” a liberal, anti-Trump woman back in high school.

He is calling the allegations absolutely false and says he is willing to testify before the Senate regarding the matter.

Supreme Court nominee Brett Kavanaugh on Monday called a decades-old allegation of sexual misconduct “completely false” and offered to speak with the Senate Judiciary Committee about the claim.

Kavanaugh’s Monday morning statement rejecting the allegation comes after his accuser, Christine Blasey Ford, spoke on the record with the Washington Post about the alleged incident that occurred during a party in the early 1980s.

“This is a completely false allegation. I have never done anything like what the accuser describes — to her or to anyone,” Kavanaugh said in a statement. “Because this never happened, I had no idea who was making this accusation until she identified herself yesterday.”

Ford told the Washington Post in an interview published Sunday that Kavanaugh held her on a bed on her back during a party at a house in Maryland. Ford accused Kavanaugh of groping her over her clothes and said he tried to undress her. She was able to escape the bedroom when Kavanaugh’s classmate jumped on them, Ford said.

Kavanaugh unequivocally denied the allegation in a statement last week, though at that time, his accuser was anonymous. Ford told the Washington Post she did not tell anyone about the incident until 2012.

The allegation has roiled the Republican effort to get Kavanaugh confirmed by the end of the month. The Senate Judiciary Committee is scheduled to vote on Kavanaugh’s nomination Thursday, and the committee is now looking into setting up bipartisan calls with Kavanaugh and Ford so senators can receive more information on the matter, a senior Republican Senate staffer told the Washington Examiner.

Ford’s lawyer, Debra Katz, said Monday that Ford is willing to publicly testify about the incident.

Kavanaugh, too, said he would speak to the Senate Judiciary Committee.

“I am willing to talk to the Senate Judiciary Committee in any way the committee deems appropriate to refute this false allegation, from 36 years ago, and defend my integrity,” he said in his statement.

In the wake of Ford’s decision to identify herself, some senators have called for the Senate Judiciary Committee to postpone its upcoming vote on Kavanaugh’s nomination, while others believe a public hearing is necessary.

“Let’s do this the right way, the thoughtful way,” Sen. Dick Durbin, D-Ill., told CNN on Monday. “It’s a lifetime appointment to the highest court in the land. It’s a generation decision.”

Sen. Jeff Flake, R-Ariz., said the committee needs to hear from Ford before moving forward with a vote. Flake is one of 11 Republicans on the Senate Judiciary Committee.

“If they push forward without any attempt with hearing what she’s had to say, I’m not comfortable voting yes,” Flake told Politico. “We need to hear from her. And I don’t think I’m alone in this.”

During an appearance on Fox News, White House counselor Kellyanne Conway said Ford “should not be ignored.”

In statement released by the White House, Supreme Court nominee Brett Kavanaugh says he is ‘willing to talk to the Senate Judiciary Committee in any way the Committee deems appropriate to refute this false allegation, from 36 years ago, and defend my integrity.’

” … “The chairman explained that “the standard procedure for updates to any nominee’s background investigation file is to conduct separate follow-up calls with relevant parties. In this case, that would entail phone calls with at least Judge Kavanaugh and Dr. Ford,” adding, “I asked Senator Feinstein’s office yesterday to join me in scheduling these follow-ups. Thus far, they have refused.” More …

Of course they have because this is only tac-tickery to stall, obstruct and get his candidacy withdrawn. 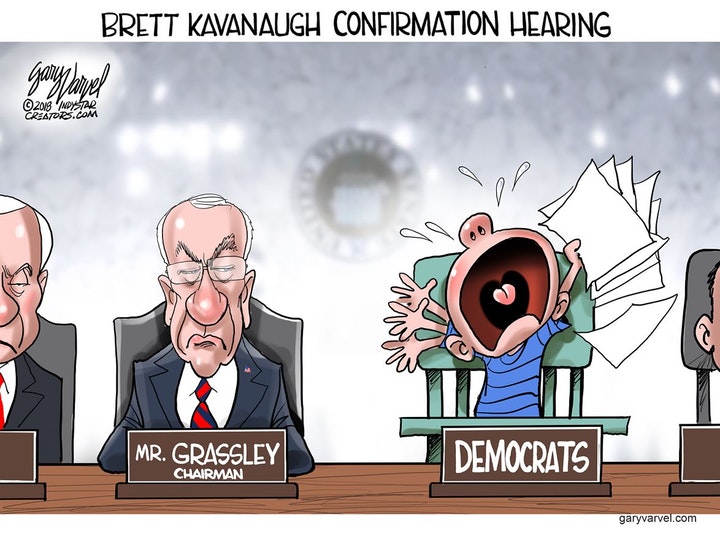