When listing the world’s most notorious terrorist organizations, why is it that Al-Qaeda, ISIS and Boko Haram so quickly spring to mind, while Hezbollah is frequently forgotten? In this video, Tony Badran, Research Fellow at the Foundation for Defense of Democracies, explains how the backing of Iran has served to legitimize Hezbollah on the world stage, while simultaneously making the group all the more dangerous.

(Video hosted on YouTube, but as we know, arbitrary deletion of videos and channels is a normal occurence, we therefore keep our own copy to avoid that problem. Added bonus, revenue flow to YouTube is also cut.) 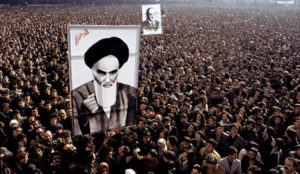 Since its inception fourteen hundred years ago, Islam has been at war with the people of this planet. Millions of people have been butchered with the sword of Islam and by the savages of Arabia.

The conquerors wished to make Islam the favored system of culture, faith and allegiance, utterly destroying other powers.

And so, with the defeat of ancient Iran by Islamic jihadis, the objective of the eradication of Iranianness began. Islam was forced down the throat of Iranians with the sword of the Arabs.

Islam lives, breathes and grows on blood. Islam must conquer and shed the blood of non-believers. It cannot possibly live in the hearts and minds of its believers as a peace-loving religion. Islam must shed the blood of infidels, meaning all non-Muslims. Islam is about world domination. Fear of pain and punishment for non-conformism is part of being a Muslim.

Those naïve Americans who believe an interfaith dialogue are doing themselves and their fellow Americans an injustice. Muslims are radical even in their interfaith dealings. Various Islamic sects and sub-sects pronounce other sects and sub-sects as heretic, worthy of death. Women are treated as chattel, deprived of many rights; hands are chopped off for stealing even a loaf of bread; sexual “violations” and “indiscretions,” as defined and delimited by Islamic Sharia, is punishable by stoning, and much much more.

These are standard day-to-day ways of the mainstream “moderate” Muslims living under the Stone-Age laws of Sharia (Islamic jurisprudence). The mainstream of Islam has been outright genocidal from inception. Muslim historians record that Ali, the first imam of the Shiites and the son-in-law of Muhammad, with the help of another man, beheaded 700 Jewish men in the presence of the Prophet himself. The Prophet of Allah and his disciples placed the men, women and children who weren’t murdered into slavery. An ancient Farsi text states:

Ali, who is the successor of God on the earth, and known to fight with a double edged sword, ordered the warriors to cut off the heads of the nonbelievers. Zobair assisted him in finishing this job. Ali also ordered the distribution of the captives and their property [i.e. the ‘booty’] among the Muslims, in accord with Sa’ad (b. Mu’adh)’s [see above] decision regarding the fate of the defeated Jews [i.e., the Qurayzah]. After the battle [and executions], Ali ordered everyone [of the Muslims] to return home. Sa’ad (b. Mu’adh) who had been very anxious during the battle, was now happy and praised God upon completion of his task. Then [later] they [i.e., the Muslims] celebrated and enjoyed beautiful women.

Muslims are taught deception and lying in the Quran itself — something that Muhammad practiced during his life whenever he found it expedient. Successive Islamic rulers and leaders have done the same. The Ayatollah Khomeini, the founder of the 1979 Iranian Revolution, for instance, rallied the people under the banner of democracy. All along, his support for democracy was not a commitment of an honest man, but a ruse. As soon as he gathered the reins of power, Khomeini went after the “Useful Idiots” of his time with a vengeance. These best children of Iran, having been thoroughly deceived and used by the crafty phony populist-religionist, had to flee the country to avoid the fate of tens of thousands who were imprisoned or executed by the double-crossing “imam Khomeini.”

Yet throughout the centuries, Iranians have continued to prevent Islam from making inroads into their cultural identity and divesting them of their heritage. Knowing their culture well, they influenced events and paved the way for posterity to turn the tide. From the beginning, three lines of resistance had become distinct: administrative manipulation, political resistance, and intellectual nonconformity.

Almost four decades after the tragic Islamic Revolution of 1979, the suffocating rule of Islam casts its death-bearing pall over Iranians. A proud people with an enviable heritage is being systematically purged of its sense of identity and forced to think and behave like barbaric and intolerant Muslims. Iranians, who had always treated women with respect and equality, have seen them reduced by the Stone-Age clergy to the subhuman status of Islamic teaching. Any attempt by the women of Iran to counter the misogynist rule of Muhammad’s mullahs is mercilessly suppressed. Women are beaten, imprisoned, raped and killed, just as men are slaughtered without due process or mercy.

One must pay attention to how Islamic spokesmen engage others in discussion. When they don’t like what they hear, they resort to ridicule, accusations and name-calling. Wouldn’t it be wonderful if these people would, for once, abandon their primitive mindset and use a civilized method of dialogue? What are the facts that they dispute? Is it the truth that they don’t like? Well, that’s tough. Truth is often unwelcome. If truth were to spread, it would reveal the true nature of Islam — something that is unacceptable to an Islamic ruling class. Yet it is light to our feet. We really must be truthful even if it hurts, and often it does. Are there any questions about the facts?

The long-suffering Iranian people must put the past behind them and use their excellent talents to join the advanced world,. What a shame to remain stuck in this horrid mentality of victimization.

Iranians deserve better than to be manipulated by a bunch of mullahs who have been having a great ride on the back of the ignorant poor, deceiving the poor and the ignorant with empty promises of all the goodies that they are promised in the afterlife. Forget the afterlife and pay attention to the plight of the suffering masses. Stop playing politics with the lives of the people. Those responsible for this sham have no heart and no shame. Let bygones be bygones, and use the marvelous human potential of Iranians to provide opportunities to better themselves and their families. The most important step in the direction of emancipation of our people is the establishment of the rule of law — not the barbaric Sharia — to grant all Iranians, male and female, young and old, of any and all beliefs, equal rights.

We Iranians don’t have a dog in this fight. In fact, we should rid ourselves of all Islamic sects, Shia, Sunni, or whatever, and stop playing victims of one power or another. Playing the victim may give psychological relief but doesn’t solve any problems on the ground, and problems on the ground we have aplenty. Let’s look forward and do something about the sorry plight of the Iranian people today, so that future generations can recall this generation of Iranians as trailblazers who had the courage to break from the bleak past and launch a bright future.