The reasons it got that way are hardly a mystery. Dr Michael Crawford’s graphic should help the uninitiated.

The staggering cost of the subsidies is born by power consumers, and so is the enormous cost of the chaos delivered in the market place whenever the sun sets and/or calm weather sets in.

This is a Country that was once renowned as an energy superpower. Now its people are virtually energy paupers. How it got that way is a travesty. Indeed, as Alan Moran puts it, the causes and consequences of Australia’s renewable energy policies are utterly diabolical. 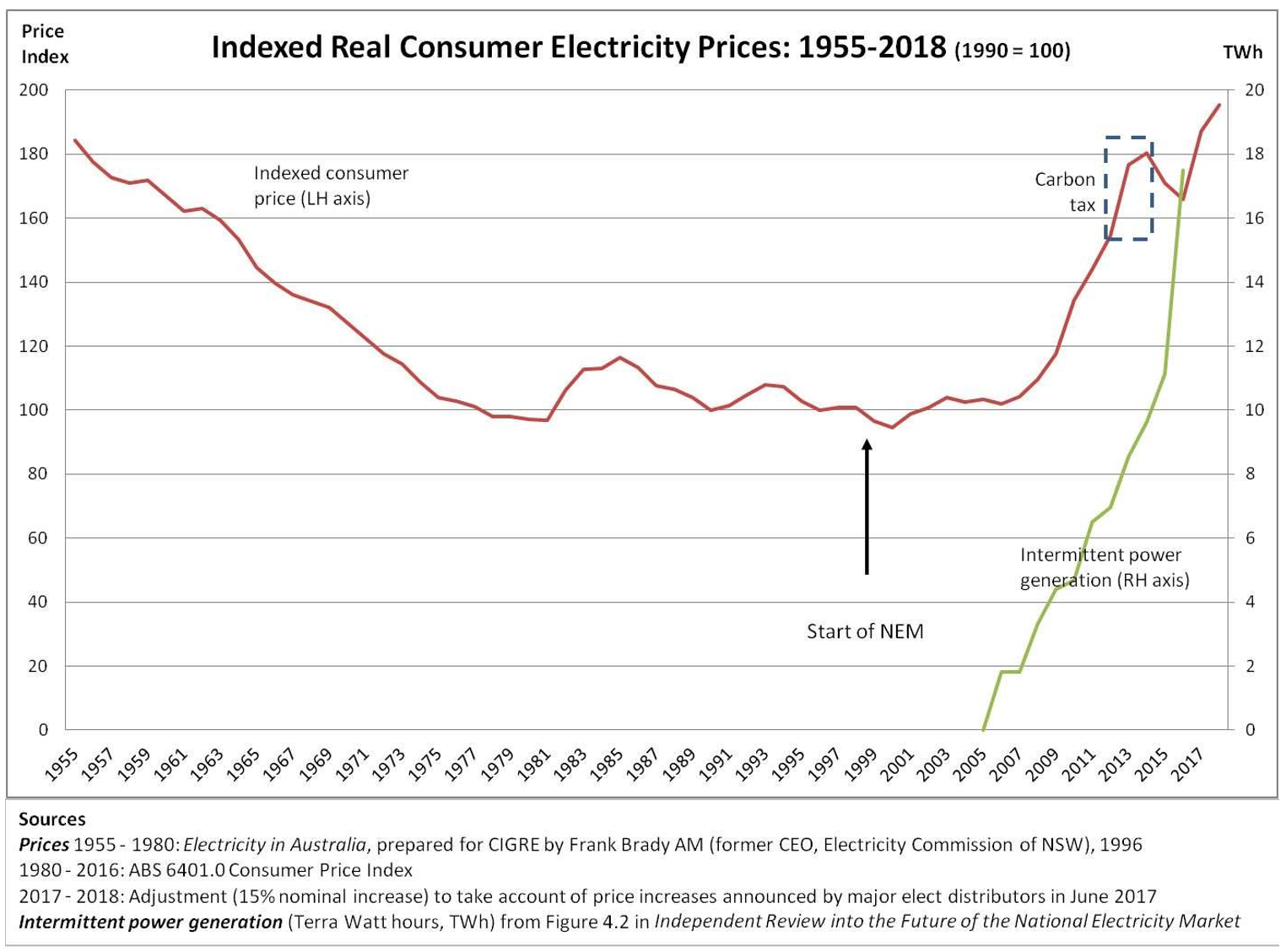 Regulatory measures – subsidies for wind/solar – have wrecked the Australian market, driving up prices and increasing supply costs.  And the policies have created wind and solar capacities that have on-going effects, which cannot be unwound by simply allowing the subsidies to run their course, since this will exact an increasing toll on energy costs.  Countervailing subsidies to coal generation cannot solve the problem since, with existing policies in place, a subsidy to one or more coal generators would impact on the economics of other coal generators rather than the subsidised wind/solar which create the problem.

The main energy subsidies are the RET for wind and large scale solar with a subsidy this year at around $80 per MWh and the SRES for roof top facilities where the subsidy is paid up-front for the presumed life of the facility at a rate of $40 per MWh.  The RET this year costs electricity consumers $2.2 billion and the SRES over $1 billion.

Some people, especially those harvesting the subsidies, maintain the fiction that renewables are now cheaper than coal.  Most politicians bow to the voter impact of the ideology of human induced climate catastrophe and the myth of cheap renewable power that the subsidy seekers have spun.

The fact is that 20 years ago, Australia, with coal providing over 86 per cent of supply, had the cheapest electricity on earth and was still low cost only three years ago.  Subsidised renewables (including roof top solar) have increased their market share from zero to 13 per cent, causing Australian electricity prices to become among the world’s highest.  Record levels of new renewable capacity is scheduled to come on stream in the coming year.  Yet in spite of energy modellers “proving” that the subsidies would bring increased supply and lead to lower prices, prices are now double the historical price of under $40 per MWh.

The dramatic rise in costs has had the effect of choking off demand, especially demand from internationally competing industries like aluminium smelting.  Demand curtailment has played a major role in the ability of the nation to meet its much vaunted Paris Agreement goals of a 26 per cent reduction in greenhouse gases from electricity “at a canter”.

The reducing demand is bound to continue with the pending departure of all aluminium smelters, accounting for 15 per cent of the load, businesses that were originally attracted to Australia by the low cost electricity that was available.  Aluminium smelting was for decades the jewel in the nation’s industrial crown, an export-oriented growth industry with very high value added.

The lower emissions have, of course, also been facilitated by increased displacement of fossil fuel generation by wind and solar.

But wind is unreliable as well as high cost.  Thus, in the latest quarter, as a result of the growth of wind, South Australia saw the market operator, AEMO, intervening 40 per cent of the time by requiring gas plants to run when prices were too low in order to compensate for asynchronous wind generators’ inadequacy in providing “system strength”.  These interventions require compensation to the gas generators and bring costs in South Australia, currently running at $30 million a year, which are charged to customers.  In addition, AEMO forced the curtailment of 10 per cent of the potential supply from wind generators to ensure the system stayed secure.

The doubling of prices over the past three years is largely due to the closure of capacity especially Hazelwood and the Northern Power Station in SA.  Coal generation has been displaced by subsidised wind and solar and by renewable generation forcing uneconomic stop-start operations, imposing costs on coal generators that they must try to recoup at other times.  The increase in roof top generation has reversed the level of minimum grid-supplied demand from the early hours in the morning to middle of the day.

In addition, the inhospitable political climate for coal generation has meant the other power stations have stinted on maintenance bringing about more outages.

Unwinding the subsidies that are causing the distortions is the key to allowing the market to mend itself.  The RET at $80 means wind generators can bid into the market at any price under minus $80 and still break even.  Moreover wind and solar generators benefit from other subsidies:

The subsidy for most rooftop PVs is paid up front (only the now less-generous feed in tariffs offer on-going support) and so cannot be recouped but new subsidies can readily be discontinued.  These rooftop subsidy costs, like the RET recouped by charges on other customers, have soared to well over $1 billion a year.  The RET itself entails a subsidy of $2.2 billion this year and payments will continue until at least 2030 and, especially in the event of a Labor Government, much longer.

The Commonwealth and the Victorian Opposition are both examining plans to support new firm capacity, which really means coal (and the Commonwealth is pressing AGL not to close its Liddell power station in NSW).

The problem with such schemes is that, while current policies remain, the supported power stations’ success is likely to come at the expense of non-assisted coal or gas stations.  Wind and solar subsidies will make them “must run” market participants.  Even the curtailments (10 per cent of potential output) to prevent system collapse presently observed in South Australia will be eliminated by investments in the grid.  And Victoria, Queensland and NSW have aspirations to mimic the South Australian “success”.
Catallaxy Files