Early this year, the President of France promised his country would become “a model in the fight against climate change.” But that was then and this is now. Climate saviour Emmanuel Macron has backtracked big time. Carbon taxes he’d insisted were absolutely necessary have now been abandoned.

In the face of ongoing ‘yellow vest’ protests, Macron decided that saving his political career trumped saving the planet. Let’s call that Thwack #1 against the UN agenda, and observe that it wasn’t at all the sort of news the army of activists then attending the UN’s annual climate gathering (on this occasion, in Katowice, Poland) wanted to hear.

One suspects those folks were already feeling glum, despite the marching band that greeted them. The New York Times reports:

Coal was proudly displayed in cases around the convention pavilions. Coal, fashioned into jewelry, was for sale…The message of the host country was not subtle. Coal, known as black gold here, is king.

We’ll call this superb trolling on the part of Poland (which relies on coal for 90% of its electricity) Thwack #2, and conjecture that the climate activists may have felt they were being kicked while they were down. Mere days prior to boarding their fossil-fueled airliners enroute to Poland, they’d received the unwelcome news that the rug had been pulled from underneath next year’s conference.

Brazil, you see, was scheduled to host the 2019 climate confab. One imagines that numerous pre-printed documents circulating at this year’s meeting enthusiastically referenced the Brazilian affair.

But elections have consequences, and the new government in that country says it has no money to spare. Voilà, Thwack #3. When a major UN climate event is unceremoniously kicked to the curb, it’s a fair bet internal disarray follows.

The woes didn’t end there. Four nations – the US, Russia, Saudi Arabia and Kuwait – threw a monkey wrench into the Polish proceedings by blocking a consensus statement that would have officially ‘welcomed’ a report released in October by the UN’s own Intergovernmental Panel on Climate Change (IPCC).

I’ve described that report as a contrived, cynical ploy whose real purpose was to generate dramatic climate headlines (see here, here, here, here, and here). Whether the conference ‘welcomed’ it or merely ‘took note’ of it as the four dissident countries proposed, is next to irrelevant for those of us who live in the real world. But from the UN’s point-of-view, this was a big deal. So that was Thwack #4.

(Conference organizers actually jumped the gun weeks ago when they ran a headline on their website welcoming the report. A larger version of this screenshot appears at the top of this post.) 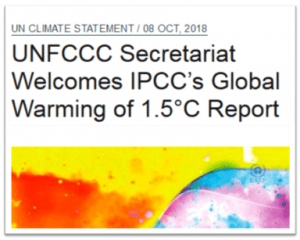 This means that many of those attending the climate conference were acutely aware of the parallel, two-day conference taking place in Morocco last week at which the Global Compact for Migration was adopted.

The UN consists of 193 countries. As recently as five months ago, every nation other than the United States was on board. By last week, the ‘pro’ side had shrunk to 164.

29 countries appear to have backed out. These include Australia, Austria, Bulgaria, the Czech Republic, Hungary, Israel, and Poland. In a gesture of holiday goodwill, let’s group these dissident countries together as Thwack #5.

A few nations, however, deserve special mention. I’ve discussed elsewhere that, last week, pact supporter Norway publicly clarified its stance on eight separate matters “due to the ambiguity of the text.” When your friends feel the need to choose their words this carefully, that’s got to sting. Thwack #6.

Then there’s the fact that Switzerland, home to extensive UN headquarters, declined to participate. Thwack #7.

Thwack #8 concerns the small matter of the collapse of the Belgian government ten days ago over whether that country should sign the pact, followed by tear gas and water cannon in the streets of Brussels as protesters made their rejection of it plain.

If you’re a UN bureaucrat, this is quite a run of disappointment, annoyance, and misfortune. But the icing on this Christmas fruitcake comes from New Zealand. Its government is currently headed by Jacinda Ardern, a 38-year-old former president of the International Union of Socialist Youth.

It’s a little known fact that New Zealand didn’t sign on in Morocco, either. A week ago, clearly playing for time, Ardern dismissed the Moroccan event as “purely ceremonial.” Thwack #9.

As this post goes to press, New Zealand’s decision to support the Migration Pact has just been announced. Media coverage is emphasizing legal advice received by the government, which reportedly concluded that New Zealand’s sovereignty won’t be adversely affected.

Remember, though, that close neighbour and ally Australia took the opposite position. How this will affect Aussie-Kiwi relations remains to be seen.

DRACONIAN UN CLIMATE AGENDA EXPOSED : ‘Global Warming Fears Are A Tool For Political and Economic Change…It Has Nothing To Do With The Actual Climate’ 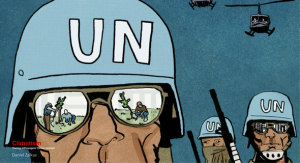