“Back Radiation” Is the Result of Temperature, Not the Cause.

An inescapable scientific fact can be shown to contradict a major assertion in greenhouse gas theory ‘physics.’ 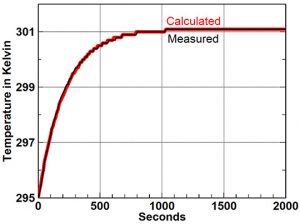 If you shine a light on a small black object, the rate of warming, the rate that heat flows, similarly decreases with decreasing difference in temperature forming an asymptotic curve shown by the black line in the next figure. The red line shows the temperature calculated by multiplying 4.6% times the average of the existing temperature and the ending temperature at each 10-second interval. The 4.6% has to do with the conductivity per second of heat into the black object. Similar asymptotic curves are observed for both warming and cooling of matter by conduction or by absorbing or emitting radiation. The flux of heat is determined by the temperature difference, not by the amount of flux as currently assumed by greenhouse-warming theory and by most physicists. This is a very important observation.

The next question is: How does a broad spectrum of frequencies of oscillation flow through air and space? The simplest example is a single frequency transmitted by a radio station. The radio program modulates a center frequency assigned by the government to prevent interference with other nearby stations. The radio transmitter causes oscillations of this modulated center frequency on the surface of the radio antenna. You tune your radio receiver to resonate at that specific center frequency. Resonance, also known as sympathetic vibration, is the way two oscillators oscillating at the same frequency can, under the best of conditions, average their amplitudes of oscillation, effectively transferring amplitude from the transmitter to the receiver. In this way, your radio receiver differentiates the center frequency of the radio station from all the other frequencies out there. It is the oscillatory nature of electromagnetic radiation that makes it possible for radiation, for heat, to be transmitted across air and space.

Resonance is all around us. You experience resonance most clearly when you push a child on a swing. If you push at exactly the same frequency as the swing is swinging, the amplitude of the swing will increase. You tune radio and television receivers to resonate at whatever frequency your preferred station is transmitting. Your cellphone is tuned to resonate with the different frequencies of transmission and reception used at a local cell tower. Individual hair cells, called cilia, in the cochlea of your ears, resonate with sounds in air, sending signals to your brain, allowing you to hear. Visible colors, which are frequencies of oscillation between 400 and 789 trillion cycles per second, resonate with cells in the cones of your eyes that send signals to your brain, allowing you to see ten million different colors.

For centuries, scientists have argued whether light, in the form of electromagnetic radiation, travels through space as waves or as particles. Waves and particles, however, describe how the energies of motion of physical pieces of matter are visualized as traveling. But light is not physical matter and light cannot be observed until it interacts with physical matter. Light appears to travel by resonance.

Conduction is resonance enabled by physical contact of molecules of matter. Radiation is resonance enabled by the interaction of what we think of as electric and magnetic fields via line of sight where what we think of as the velocity of light is proportional to the very short time required for resonance to occur. Frequency of oscillation is observed not to change with distance, even over galactic distances, except for Doppler effects where the source and receiver are moving relative to each other. Similarly, amplitude of oscillation is not observed to change with distance. Thus, the Planck temperature of radiation from Sun is the same close to Sun as it is close to Earth. But the thermal effect of solar radiation is observed to decrease with the square of the distance. What appears to be happening is that the density of molecular bonds on the surface of matter that resonate decreases with distance so that the amplitude increase due to resonance must be shared with increasing numbers of bonds.

An 11-page summary of the details for a general audience

A 20-page scientific paper A Most Inconvenient Reality — Greenhouse Gases Cannot Physically Explain Observed Global Warming submitted to the Journal of Geophysical Research on May 28, 2018, that describes these issues in more detail. This file includes the editor’s email rejecting the paper without review.

Dr. Peter L. Ward worked 27 years as a geophysicist and program leader for the United States Geological Survey. After retiring, he has been able to put his full-time effort, for ten years, into trying to understand what really causes global warming.