Her lawyer Tasnime Akunjee stated that her family is considering “all legal avenues to challenge the decision.” At whose expense? And now the family has launched its battle, vowing to “take Home Secretary Sajid Javid to court.”

Javid has “warned he will not hesitate to prevent the return of Britons who travelled to join ISIS.” Kudos to Javid. This should be a policy followed by every Western nation, out of concern for the safety of its citizens. Policymakers should keep in mind the people whom the Islamic State beheaded, raped and tortured. These Islamic State brides were either participants in these atrocities or otherwise complicit in them in some manner. Jihadi brides of the Islamic State are often presented as poor little brainless victims lacking any will of their own, and who were led unwittingly by beastly Islamic State men into chambers of horror, but this is not the case. Shamima Begum and her counterparts are jihadists themselves. They have no remorse, and they raise their children with a murderous hate against infidels. It is stunning that anyone in the UK would take them at their word as they beg for sympathy. Their victims need sympathy. And the Western public needs protection from them.

More on this story. “ISIS bride Shamima Begum STRIPPED of British citizenship after showing no remorse for fleeing to Syria,” by John Lockett, The Sun, February 20, 2019:

ISIS bride Shamima Begum has been stripped of her British citizenship after showing no remorse for joining the terror group.

“Please find enclosed papers that relate to a decision taken by the Home Secretary, to deprive your daughter, Shamima Begum, of her British citizenship,” the letter read.

“In light of the circumstances of your daughter, the notice of the Home Secretary’s decision has been served of file today (19th February), and the order removing her British citizenship has subsequently been made.”

The letter – obtained by ITV News – went on to urge the Begum family to make their daughter aware of the decision while adding she had the right to appeal.

It’s not yet known how the ban will affect her newborn son Jerah – who is half British and half Dutch.

The schoolgirl’s family have said they are “disappointed” by the Home Office’s decision, said their lawyer Tasnime Akunjee.

“We are considering all legal avenues to challenge this decision,” he tweeted.

Begum’s dual nationality – as both her parents are of Bangladeshi – reportedly cleared the way for today’s decision.

However, Mr Akunjee, told The Independent the 19-year-old is a sole British national and had “never had a Bangladeshi passport”.

The Home Office has declined to comment on Mr Akunjee’s allegations but said: “We do not make people stateless.”

The Truth About the ‘ISIS Bride’

RETURN DENIED: US to Alabama ISIS bride – You are not a citizen and deserve nothing

Secretary of State Mike Pompeo on Wednesday said “ISIS bride” Hoda Muthana is not a US citizen and will not be allowed back into America. 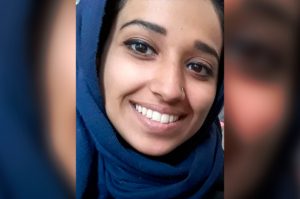 But a lawyer for Muthana — who grew up in Alabama and fled to Syria in 2014 to join ISIS, but is now in a refugee camp, begging to be allowed back into the United States — insisted to The Post that she is indeed a citizen.

“Hoda was born in the United States. She absolutely is a citizen. The Department of State is wrong,” said Hassan Shibly, adding that she was born in Hackensack, New Jersey, in 1994.

“It’s because they’re claiming her dad was a diplomat and the argument is that children of diplomats even if they’re born in the US are not citizens.”

Shibly said Muthana’s father was a Yemeni diplomat to the US, but she was born months after he finished that job.

While kids born in the US are typically granted citizenship, babies born to foreign diplomatic officers are exceptions.

Shibly says Muthana has held a valid United States passport. In a tweet after she joined ISIS, she posted a photo of woman’s hands holding a US, UK, Canadian and Australian passports, with the caption, “Bonfire soon, no need for these any more.”

ISIS bride just can’t seem to understand why Trump and anyone sane doesn’t want her to come back into our country. To make matters worse, we have sympathizers right here at home who want to help this woman. Seriously? This is the same woman who called for terrorist attacks on Memorial Day. And you won’t BELIEVE what she thinks is an acceptable punishment for her acts of treason. Video: Jon Miller 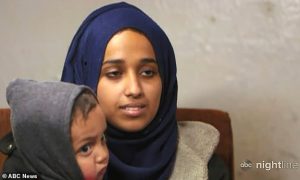 Hoda Muthana, 24, spoke to ABC from her refugee camp in northern Syria. She balanced her 18-month-old-old son on her lap during the sit-down. Muthana ran away in 2014, leaving her family behind in Hoover, Alabama. She married three ISIS fighters and has called for terrorist attacks on Twitter. Now, she says she wants to be welcomed home to the US without facing jail time. The young mother said she has been ‘traumatized’ by her experience in Syria. She eventually decided to flee because her group had run out of food, she said two of her husbands died and her third, who she has not named, is still there. The State Department has not indicated whether it plans to retrieve her.

The American ISIS bride who wants to come home to the US has told how she wants the government to pay for her to undergo therapy if it allows her to return – and says she is hopeful they won’t send her to jail.

Hoda Muthana, 24, spoke on Wednesday in an interview with ABC News, her first since fleeing the terror group three weeks ago, from a refugee camp in northern Syria.

With her 18-month-old son balanced on her lap, she said she had given up the extremist ‘ideology’ that convinced her to leave her family and that she wanted to be welcomed home by the American people.

‘I’m a normal human being who has been manipulated,’ Hoda, who was 20 when she fled, said.

‘I hope America doesn’t think I am a threat to them and I hope they accept me…I hope they excuse me because of how young and ignorant I was.

‘I can tell them that now I have changed, now I am a mother, I have none of the ideology and hopefully everyone will see it when I get back.’

Asked what she would expect as a reasonable form of punishment for joining the terror group and calling for bloodshed in the US on social media, she answered: ‘Maybe therapy lessons, maybe a process that will ensure us that we’ll never do this again.

Jail time, I don’t know if that has an effect on people. I need help mentally as well, I don’t have the ideology any more but I am just traumatized by my experience.’

She added that she cries herself to sleep ‘almost every night’ at the thought of being put behind bars.

‘I know that when I do get back I probably will be sentenced to jail for I don’t know how much time.’

Looking at her son, she said: ‘Thinking that my last few moments with him is stuck in a prison before another prison…’

Hoda also gave a confusing explanation for why she fled her parents’ home in Hoover, Alabama, in 2014 to join the oppressive Islamic State, saying that it was because she wanted a more ‘Americanized life’.

‘I had a good relationship with my family but I wanted a more Americanized life. I just wanted to go out, I wanted to have, like, friends, go to places. I didn’t get any of that.

‘The only way out for me was to become practicing… to become more religious,’ she said.

Before she fled, she was part of a network of young Muslims who used Twitter to soak up extremist ideas.

Islamic State jihadi: “Why shouldn’t I be able to go home? I’ve done nothing in Canada. I’ve broken no laws there.” 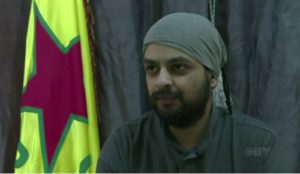 Mohammed Ali should never be allowed back in. He joined an entity that is avowedly at war with Canada and has repeatedly called upon Muslims in Canada to murder Canadian civilians. But the Canadian authorities are so clueless and compromised today that they will probably fall for this.

An Ontario man who spent four years fighting for ISIS and used social media to recruit others now wants to return home with the help of the Canadian government.

The 28-year-old says he, his Canadian wife and their two children have been “hung out to dry” and that it is no longer safe for them in Syria.

“Why shouldn’t I be able to go home? I’ve done nothing in Canada. I’ve broken no laws there at all,” said Ali in an interview.

Ali and his family attempted to flee to Turkey after he was cast out of the terror group, but were captured by coalition-led forces. They have been detained in a Syrian prison for the past nine months.