Doh! Communism doesn’t work that way, it only works with other people’s money ..

A tribute to the ability of politicians to rip off taxpayer money and grab citizen land with no accountability. Video: LibertyPen

The Left wants everything free, except free speech

Free health care, free college tuition, free child care are the beacons for the liberal Left.  As leftists’ platforms further regress into socialism, they know the only thing that remains an obstacle and can’t be free: speech and expression.  Twitter and Facebook are actively aiding Democrats in their opposition by banning conservative voices on their platforms.

Alex Jones’s and Milo Yiannopoulos’s previous bans from the tech giants’ websites were a litmus test.  When they were allowed to get away with that with no serious blowback, they went for more.  So far this week, many prominent right-wing influencers have been banned or silenced from Facebook and Twitter.  Jacob Wohl, Tommy Robinson, and Raheem Kassam follow other conservative voices to their social media graves.

As Donald Trump, Jr. observed, these episodes of censorship happen only one way.  Jacob Wohl made a nuanced comment that he would start fake Twitter profiles, as 2020 Democratic candidate Kamala Harris has done.  Tommy Robinson was kicked off Facebook and Instagram for religious blasphemy, criticizing Islam.  Raheem Kassam was temporarily banned for the same. 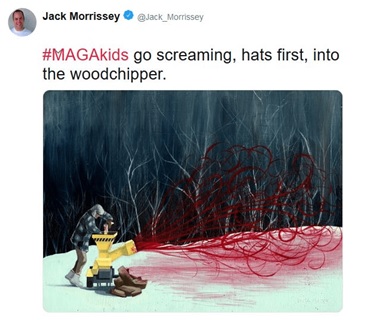 Yet Jack Morrissey, who made the post about violently executing children in MAGA hats, continues to enjoy Twitter.

Brad Parscale, one of the longest lasting Trump campaigners, once said right after the 2016 elections that “Facebook and Twitter were the reason we won this thing.”  Now the social media monopolies are doling out their punishments.  Even if they are private companies, they are treated as platforms, not publishers, but because technology is so new and developing, they get to write and enforce their own laws about who can speak and what he can say, with no recourse.

There is still an establishment of free speech that Facebook and Twitter will parrot when asked to take down pro-Taliban videos, refusing the U.S. government’s request on the grounds of free expression.  These companies are unregulated as they write their own community standards that constantly evolve.  As Jeffrey Rosen states, “lawyers at Facebook and Google have more power than a Supreme Court justice.”  Arguably, it’s the moderators of the sites who wield the most power.  They get to decide for themselves what they feel is hate speech, not just what has already been established as such. 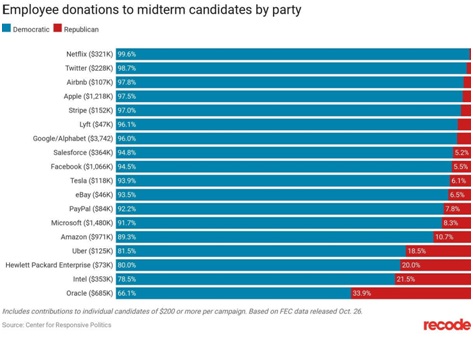 This raises serious ethical concerns.  For example, does this continuing censorship of conservative ideas on the largest social media platforms actually have a quantifiable effect on elections?  If social media’s employees with power to censor speech online are monetarily supporting Democrats over the GOP, which they are, can they actually change the outcome of elections?

Because these moderators can delete posts and accounts on their own judgement, conservative voices are in danger of not being allowed to reach moderate voters.  Last year, Facebook congratulated itself on lowering the traffic to right-wing websites by an astonishing 93%.

Since most people don’t possess the individual drive to seek out opposing viewpoints, they remain stationary on the comfortable middle ground, where not liking Trump is the safest position, without challenge.

This may be creating an environment of groupthink, where leftists believe that their ideas are farther spread than they are because they are successfully silencing the opposition.  This will lead them to believe that their opinions on policy are the status quo.  Their own platforms reflect this, as, with the help of social media, they believe that people are willing them to go even farther left on their policies than ever before, like open borders, infanticide, and the Green New Deal.

This could ultimately end up being a trap for Democrats, since recent polls show a major shift within even Millennial liberals toward conservative ideas, like that abortion should have limitations.  When the media are totalitarian and state-run, like in the USSR or North Korea, it comes with the negative externalities like most people understanding that they should not believe what they see and hear.  Essentially, the more conservatives are unwillingly separated from their platforms, the less the public will trust the institutions’ censorship and the material they do allow.

It brings a literal meaning to the “silent majority” when the majority is physically being silenced.