Image: Essay on the main benefits of Transparency

Why, do you think, they don’t like transparency and open debate?

“The atmospheric greenhouse eﬀect, an idea that many authors trace back to the traditional works of Fourier (1824), Tyndall (1861), and Arrhenius (1896), and which is still supported in global climatology, essentially describes a ﬁctitious mechanism, in which a planetary atmosphere acts as a heat pump driven by an environment that is radiatively interacting with but radiatively equilibrated to the atmospheric system. According to the second law of thermodynamics such a planetary machine can never exist. Nevertheless, in almost all texts of global climatology and in a widespread secondary literature it is taken for granted that such mechanism is real and stands on a ﬁrm scientific foundation.

In this paper the popular conjecture is analyzed and the underlying physical principles are clariﬁed. By showing that (a) there are no common physical laws between the warming phenomenon in glass houses and the ﬁctitious atmospheric green house eﬀects, (b) there are no calculations to determine an average surface temperature of a planet, (c) the frequently mentioned diﬀerence of 33 ◦C is a meaningless number calculated wrongly, (d) the formulas of cavity radiation are used inappropriately, (e) the assumption of a radiative balance is unphysical, (f) thermal conductivity and friction must not be set to zero, the atmospheric greenhouse conjecture is falsiﬁed ..” https://roaldjlarsen.wordpress.com/2014/09/04/falsi%EF%AC%81cation-of-the-atmospheric-co2-greenhouse-e%EF%AC%80ects-within-the-frame-of-physics/

The steep temperature fall by altitude of the first 10 km. makes “back radiation” impossible. Temperature increase above 10 km. is irrelevant because of, for example, the distance between molecules (lack of mass) and pressure. 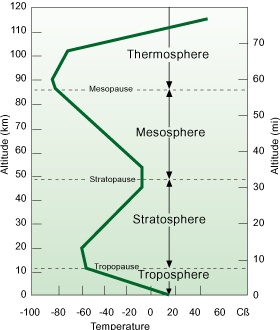 Downwelling Longwave Radiation DLR or backradiation from the atmosphere to the Earth surface, is a fundamental pillar of CO2 alarmism.

Does DLR represent (i) physical reality or (ii) man-made invention?
Here are some sources of evidence: Crawford and Duchon, Brunt, IPCC AR4, Kiehl and Trenberth, Trenberth, Fasullo and Kiehl.
It appears that DLR/backradiation is not described in standard physics literature, and thus seems to be either a new discovery or new invention.
To find out which let us take a look at in particular POSTEL:
GEOLAND:
We read that DLR cannot be measured directly, only through models with temperature and humidity as input, while it is directly related to the greenhouse effect. We are also invited to watch movies of DLR hitting West Africa in the AMMA project.
We find support to our claim that DLR and backradiation is fictional without physical reality, and thus that an essential component of the greenhouse effect is fiction and not physics.
DLR thus appears to be a recent man-made invention, and so the greenhouse effect of CO2 alarmism.
It is remarkable that several governmental agencies base their whole existence on measuring DLR/backradiation, which may not exist. This shows the strength of tax-financed science
which can freely invent to measure anything, fiction or reality does not matter as long as numbers, tables and movies are produced according to the principle:

The Fraud of the Atmospheric Greenhouse Effect Part 1: The Failure of IPCC Energy Budgets

And because there’s no warming caused by CO2 ..