No, the “climate fears” won’t evaporate because the climate scare was never about science, facts, CO2 or logic, it’s not even about the climate. It’s always been a vehicle for money and political power.

Socialists are so power hungry they use any vehicle in order to get into positions of power. Look at old Bernie Sanders, so old he can barely walk, but are desperately “running” for president.

A new study published in Science shows that 31% of human CO2 emissions in the period from 1994 to 2007 was absorbed by the oceans. As such, nature has done more to reduce our carbon footprint than all climate treaties combined. This may significantly impact climate policies. 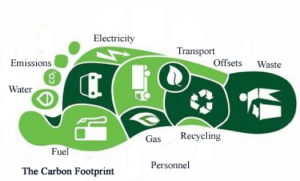 The ocean surface reacts chemically with CO2 and creates carbonic acid (H2CO3), which is transported and diffused down into the ocean, where it stays for hundreds of years before it resurfaces and degasses into the atmosphere. Most of the world’s natural CO2 is therefore stored in the oceans. They contain in the order of 50 times more than the entire atmosphere.

This mechanism has been known for a long time and is mostly understood.  A team of scientists led by Professor of Environmental Physics Dr. Nicolas Gruber at ETH Zürich wanted to measure and quantify this absorption, and data collected over a period of 13 years largely confirmed the models of oceanic sinks. The oceans are gobbling up our carbon emissions, and they will continue to do so until saturated.

A primary concern has been to come closer to finding the saturation limit, and Gruber explains that there are still no signs of reaching it: “Over the examined period, the global ocean continued to take up anthropogenic CO2 at a rate that is congruent with the increase of atmospheric CO2.”

Another concern was to quantify ocean acidification, which is postulated to affect ocean life negatively. “Our data has shown that this acidification reaches deep into the ocean’s interior, extending in part to depths of more than 3000 m,” Gruber says.

The study may be far better news than many feared. One early worry among scientists was that CO2 absorbed by the oceans would be mostly trapped in the uppermost layer where most aquatic life exists. If that were the case, acidification could become a problem to organisms and could also mean that the water stopped absorbing our emissions, which would lead to a more rapid rise in the atmosphere instead.

However, measurements show that the recent anthropogenic carbonic acid has been transported to depths of more than 3000 meters, meaning that it will take a very long time before the oceans become saturated.

To put this in perspective, consider that, at the current rate, humans increase atmospheric carbon by about 0.5% annually. One-third of that goes into the ocean. Since the oceans contain roughly 50 atmospheres of CO2, it would take us several hundred years to increase the oceanic carbon to 51 atmospheres, which is not particularly alarming.

Also, consider that around 120 million years ago, the atmospheric CO2 level was four times higher than today and remained so for millions of years. It means that the oceans must have been far more acidic than today, and yet ancient aquatic organisms such as corals and sharks thrived and have survived to modern times.

This should be considered good news but is highly unlikely to be presented as such, if reported at all. The study implies that we have far less to worry about than alarmists would have us believe. Our emissions are greening the earth, and the oceans are also gobbling up a big chunk of them, seemingly without an end in sight and without endangering aquatic life. What’s not to like about that?

The stark reality of CO2 emissions reduction, in one graph 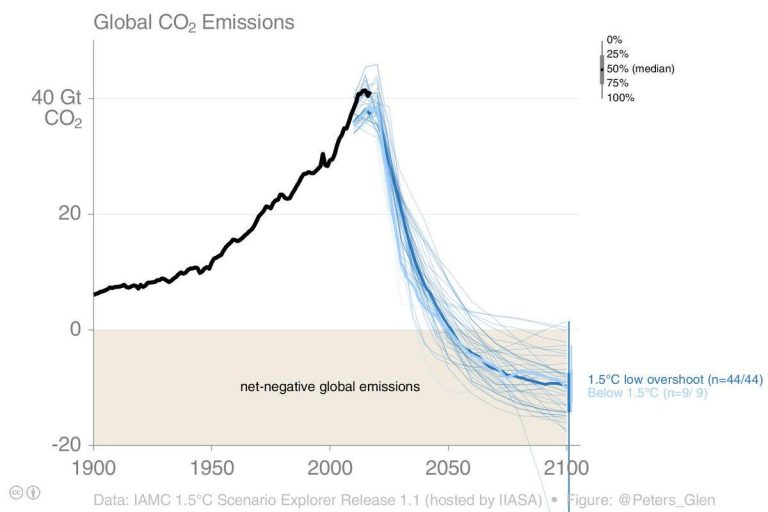 Gel Peters, who made the graph, writes:

Where do we want to go? For 1.5°C we need CO₂ emissions to go down much faster than we went up. CO₂ emissions down 50% in a decade, zero by 2050, negative thereafter. We have to start remove CO₂ now, to reach the necessary scale at the end of the century.

Because there is no radiative greenhouse effect

There is no Radiative Greenhouse Effect – Main Presentation

In this live webcast I will be giving a slideshow presentation which demonstrates that the radiative greenhouse effect, upon which climate alarm and even the field of climate science itself is based, does not exist. On both scientific requirements of having theoretical & empirical support, the radiative greenhouse effect is proven to have neither: it is based in false physics and paradox, violates the laws of thermodynamics, and doesn’t produce the empirical observables it predicts and claims responsibility for.

It isn’t just that climate alarm isn’t as bad as the alarmists say it is, it is that the very foundation of the science – the radiative greenhouse effect – is in error, does not exist, and hence the alarmism and the policy surrounding it is completely, 100% in error. Not merely slightly wrong, not mostly wrong, but completely 100% wrong.

If you start with false premises, everything you subsequently extrapolate from those premises will likewise carry along the original error and thus exhibit error within themselves. Questions and comments here: https://climateofsophistry.com/2017/0…

Errata: At 48:28 and a couple of times threafter I use the term “CO2 asphyxiation”, when what I meant was “CO2 starvation”. Video: Joseph Postma