Oh well, seeing as it’s “Let’s Get AOC” week, what about this gem: 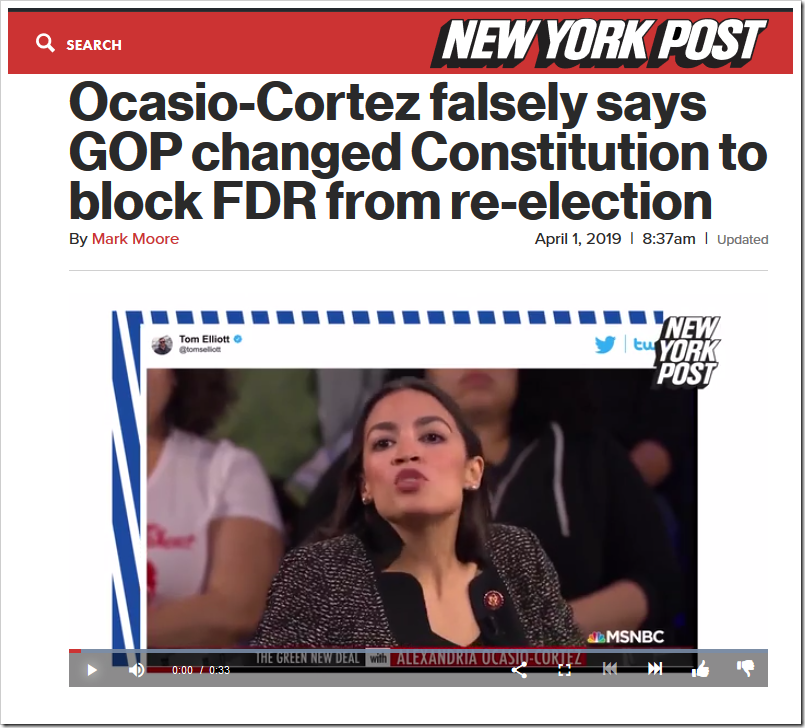 Rep. Alexandria Ocasio-Cortez incorrectly asserted that Republicans amended the Constitution to stop former President Franklin Delano Roosevelt from being re-elected — even though he died in office.

“They had to amend the Constitution of the United States to make sure Roosevelt did not get re-elected,” the New York Democrat said during an MSNBC town hall on Friday night, as she touted the positive effects of the New Deal.

Ocasio-Cortez was referring to the 22nd Amendment, which a Republican-controlled Congress passed in March 1947.

Even I knew that FDR was elected four times.

Meanwhile her constituents seem none impressed with her Metro Socialist agenda: 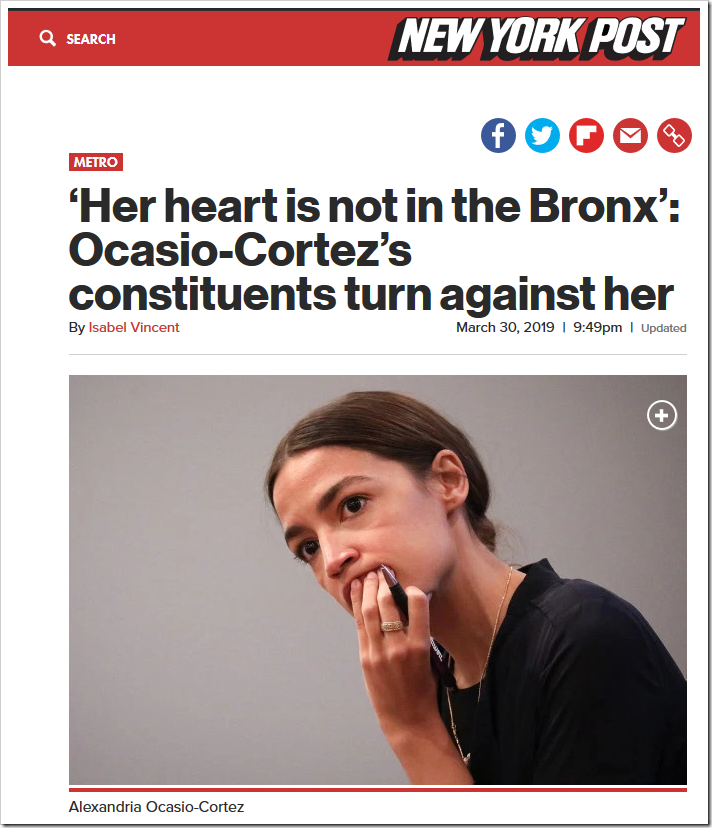 Amid her zeal to save the world with the Green New Deal, Rep. ­Alexandria Ocasio-Cortez has ­ignored residents in her own Bronx back yard.

“I thought AOC would be our savior, but that’s not the case,” complained Roxanne Delgado, a local activist who said she has tried for months to get in touch with the congresswoman for help saving an animal shelter and to clean up parks in the district.

Delgado, 40, says she has made numerous calls to Ocasio-Cortez’s offices in Washington and Queens and sent a barrage of tweets after the freshman lawmaker encouraged residents during a recent visit to a Bronx public library to hit her up on social media.

But she’s heard nothing back.

“NO email or contact on @AOC’s page except DC number which has full #voicemail and no one picks up,” Delgado tweeted on Monday.

The Post made several calls to both the Washington and Queens offices last week. The same recording at both numbers gives Ocasio-Cortez’s website and doesn’t allow callers to leave a message.

The website includes a “scheduling request” form that visitors can fill out to ask for a meeting.

Another Bronx constituent told a community gathering last month that they needed Ocasio-Cortez for a sitdown with post office officials to sort out difficulties he was having with mail delivery.

“I want AOC or a representative from AOC to be there,” Anthony Vitaliano, a former cop and Community Board 11 member, said at a Feb. 28 board meeting.

Vitaliano, 78, also wants Ocasio-Cortez to pressure Amtrak to clean up graffiti at property it owns on Tremont Avenue.

“You know, I appreciate what she’s doing, but she has to represent us,” he told the board gathering, where other elected officials — from the city and state but not AOC’s office — sent staffers.

Vitaliano told The Post: “She has to address these local issues. Her district is everywhere else in the US. Her heart is not in the Bronx.”

“Tommy cared about us,” Vitaliano said.

Although Ocasio-Cortez tweeted about improving mail service in the Bronx this month, Vitaliano said he was still experiencing problems and waiting for her office to arrange a meeting with post office management.

And although a Bronx community rep for Ocasio-Cortez visited the graffiti site, nothing has happened, he said.

Meanwhile, Delgado noted the animal shelter site was spared — thanks to help from the City Council and the mayor’s office.

Making access all the more challenging for her constituents, Ocasio-Cortez has yet to open an ­office in the Bronx.

A rep for her told a Bronx community board meeting in January that the congresswoman was having difficulty finding space.

“If you have any leads, please send them our way,” said Naureen Akhter, a deputy district director for Ocasio-Cortez’s office.

Still, at least she has got her priorities straight! It’s strange that her voters can’t see it! 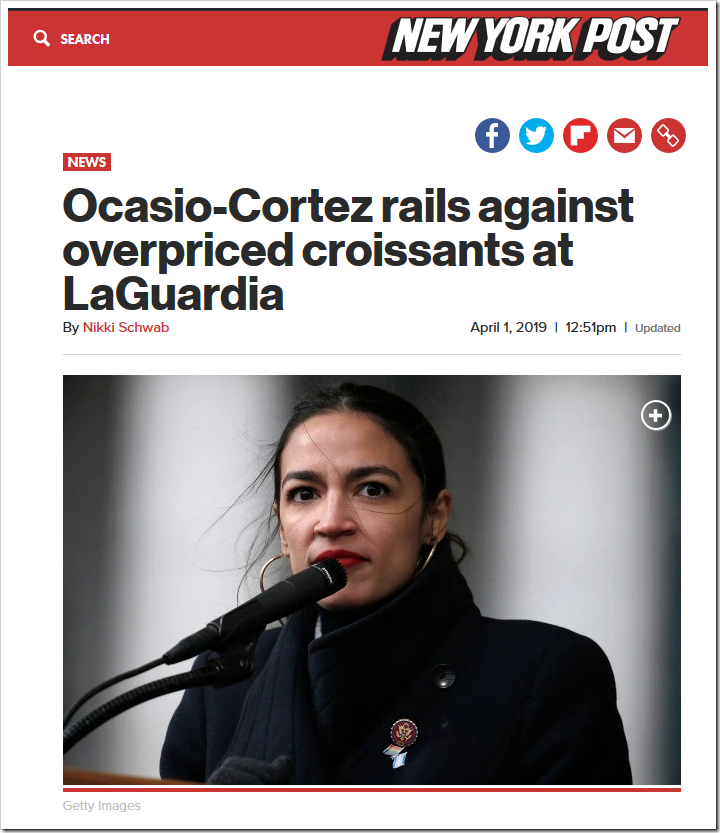 Alexandria Ocasio-Cortez says the “Farting Cows” blunder was not her fault.

Rep. Alexandria Ocasio-Cortez, D-N.Y., blamed an unnamed aide for the document that was sent out to the media and posted on her congressional website during the disastrous February rollout of her Green New Deal climate plan.

"I definitely had a staffer that had a very bad day at work," @AOC said in response to a question about her controversial #GreenNewDeal FAQ that mentioned "farting cows"

She labeled it a "working draft" that was released too early by said staffer.https://t.co/ea17ZG48nx pic.twitter.com/vLoHFt9faA

But the rollout hit an immediate snag: a confusing six-page Green New Deal FAQ document that had also been sent to the media by Ocasio-Cortez’s office and posted on her website.

Among other things, it proposed providing “economic security for all who are unable or unwilling to work” and called for “a full transition off fossil fuels and zero greenhouse gases.”

“We set a goal to get to net-zero, rather than zero emissions, in 10 years because we aren’t sure that we’ll be able to fully get rid of farting cows and airplanes that fast,” the Green New Deal FAQ document read.

I think it is kindof sweet that AOC seems to have forgiven whichever unnamed staffer inadvertently helped make her Green New Deal look like such an amateur effort. 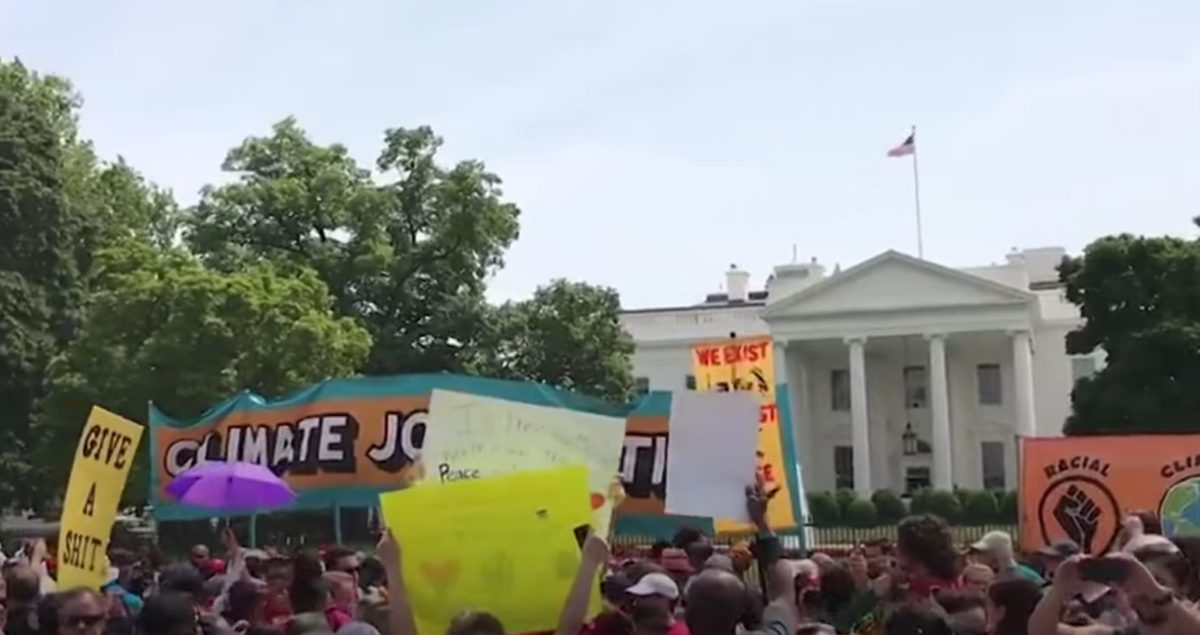 The terrifyingly naïve socialist Green New Deal (GND) proposed by Alexandria Ocasio-Cortez offers the best example I can think of why 16-year-olds shouldn’t be given the right to vote.

It’s not so much that I fear that Congress would actually succeed in enacting legislation to replace all fossil energy with windmills and sunbeam collectors. Or that it will criminalize ownership of my internal combustion car. (I’ll give you my steering wheel when you pry it from my cold dead hands).

I don’t even worry that I’ll have to go total veggie in order to save the planet from other flatulent animals (therein possibly creating collateral climate damage from increased bean consumption.)

No grownups that I have the giddy good fortune to know would really take such proposals seriously, much less hysterical claims that they are necessary to keep melting glaciers from flooding Al Gore’s nine million dollar Montecito, California coastal home in the next 12 years.

Incidentally, even the latest UN Intergovernmental Panel on Climate Change report found no increased trends in floods, hurricanes, tornados or droughts — nor did it attribute extreme weather to human greenhouse gas emissions.

So here’s the truly scary part. Even if those who proposed and previously endorsed this crazy stuff really know better, might spreading such nonsense score them victory votes in 2020?

If they truly believe so, then why did every one of the original show-boating Senate Democrat GND endorsers jump ship when Senate Majority Leader Mitch McConnell, R-Ky., required them to vote on a simple yes/no support resolution?

The encouraging answer is that those who seriously cared recognized that they were being lured into a political trap which would brand them with policy views which lie far outside the public mainstream.

Minority Senate Leader Chuck Schumer, D-N.Y., characterized the forced vote comeuppance as playing “gotcha politics.” Schumer said, “Everyone knows it’s a stunt, including the majority leader himself. He put something on the floor and then votes no. What’s the point of that?”

McConnell, a Kentucky Republican, had been upfront for weeks about his intentions to put Democrats — especially those running for president — on record. Some of those GND co-sponsoring contenders include Kamala Harris of California, Kirsten Gillibrand of New York, Elizabeth Warren of Massachusetts, Cory Booker of New Jersey, and Amy Klobuchar of Minnesota.

Declared Socialist Sen. Bernie Sanders, I-Vt., a co-sponsor of the resolution and presidential candidate, voted “present” along with other members of the Democratic caucus.

Evidence of any profiles in courage in support of GND was entirely absent. Sen. McConnell later told reporters that “a vote present today is a vote in favor of the Green New Deal.”

Sen. McConnell described GND as “a socialist makeover of the entire U.S. economy.” Just prior to the vote he said, “Communities practically everywhere else would be absolutely crushed…killing off entire domestic industries. Winding down millions of jobs. Basically outlawing the only sources of energy that working-class and middle-class families can actually afford.”

The final vote was 57 against and no one for the plan, with 43 Democrats voting present. Four senators who caucus with the Democrats joined all 53 Republicans in voting no.

Sinema urged that “Congress should stop the political games and work together on practical solutions that foster a healthy environment, grow our economy, and help Arizona families get ahead.”

Manchin explained, “While I appreciate the renewed conversation around climate change that the Green New Deal and its supporters have sparked, I think we need to focus on real solutions that recognize the role fossil fuels will continue to play. That’s why I voted against the resolution today.”

Speaking on the Senate floor, Sen. John Barrasso, R-Wyo., said, “The Green New Deal is not a solution for America, it is a big green bomb that will blow a hole in our strong, healthy and growing economy.

Minority Leader Schumer appeared undismayed, even emboldened by the vote. Politico reported him saying “We, Democrats, are on offense . . . and we’re feeling really good about where we’re moving.”

Regarding the GOP’s GRD policy, Trump is quoted as saying “Yeah . . . Make sure you don’t kill it too much because I want to run against it.”

Is Schumer just dreaming that Dems can count on delusional Greed New Deal gullibility as a winning strategy? If so, maybe the White House and Congress will give them unwelcome election night courtesy wakeup calls.

Alexandria Ocasio-Cortez wants to get rid of freedom in the economy: Heartland Institute Executive E

If there really was a “man-made” problem with the climate, which it’s not, who would put socialists in charge of solving it? You need to be pretty ignorant of history and both deaf and blind to even consider that .. ref.: