The Rent & Grant Seeking Community of activists and criminals have told me for years that i do not know what i am talking about when i am claiming CO2 is cooling the atmosphere. This proves i understand climate better than the “green experts” and climate alarmists pretending to do science.

The new millenium is seeing revolutionary change in our understanding of carbon dioxide (CO2). Once the demon global warming gas, scientists are increasingly accepting they got that wrong. We examine some of the astonishing developments.

Robin Wylie, is a doctoral candidate in volcanology, at University College London. Like other experts in this field he will shock you with a surprising new fact. Planet Earth is a heavy smoker. The true extent of its habit, though, has only recently begun to surface.

Until around the start of this new century, the academic consensus was that volcanic output of carbon dioxide from erupting volcanoes was tiny. However, the science is now revealing a hidden side to our leaking planet.

In 1992, it was thought that volcanic degassing released something like 100 million tons of CO2 each year. Around the turn of the millennium, this figure was getting closer to 200 million tons.

Mike Burton, of the Italian National Institute of Geophysics and Volcanology has found that it could be nearer to 600 million tons. It caps a staggering trend: A six-fold increase in just two decades. [1]

Another esteemed expert, Professor Ian Plimer, reveals what volcanologists and geologists have learned from the 2010 Icelandic eruption. He reports:

“Since its first spewing of volcanic ash, in just FOUR DAYS, it NEGATED EVERY SINGLE EFFORT humans have made in the previous five years to control CO2 emissions on our planet.”

Of course, for the past 30 years we have been told by government climate ‘scientists’ that carbon dioxide must be suppressed because it is ‘dangerous.’ But more recently, even NASA is admitting CO2  is the vital chemical compound that every plant requires to live and grow and to synthesize into oxygen for us humans and all animal life.

Many already knew this from horticultural science where it is essential to pump huge quantities of CO2 into commercial greenhouses to boost crop yield. Paleo-geologists also confirm that over vast geological time scales we currently live in an era of extremely low atmospheric CO2 levels (see graph below). 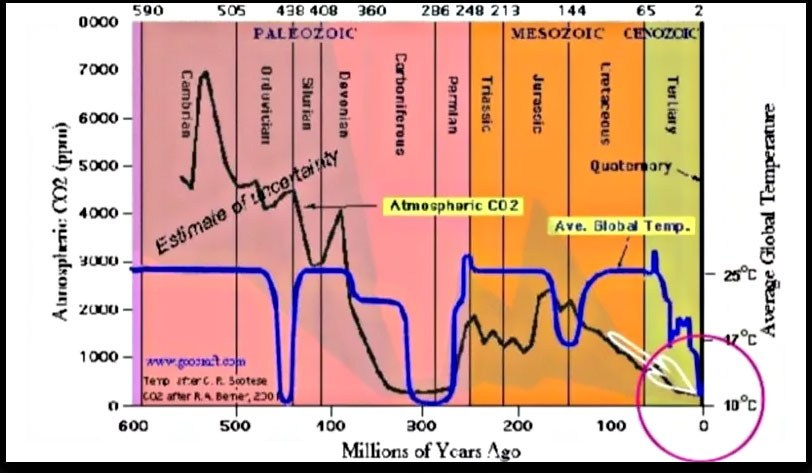 But don’t confuse the black smoke ash cloud you see from volcanic eruptions with CO2. Carbon  dioxide is both colorless and odorless.

This benign gas is being emitted quietly and unnoticed, every day globally around the clock by thousands of volcanic vents – most of which are uncharted and at the bottom of our oceans. Only when a massive volcanic land eruption hits the headlines do we get to hear of it.

You see, the planet has always enjoyed an upside to this apparently foul planetary smoking habit: the extra CO2 is fertilizer for most plants. The geological record proves that the more carbon dioxide there is in the air, the richer the plant growth on the surface.

“I know….it’s very disheartening to realize that all of the carbon emission savings you have accomplished while suffering the inconvenience and expense of driving Prius hybrids, buying fabric grocery bags, sitting up till midnight to finish your kids “The Green Revolution” science project, throwing out all of your non-green cleaning supplies, using only two squares of toilet paper, putting a brick in your toilet tank reservoir, selling your SUV and speedboat, vacationing at home instead of abroad,nearly getting hit every day on your bicycle, replacing all of your 50 cent light bulbs with $10.00 light bulbs…..well, all of those things you have done have all gone down the tubes in just four days!”

The volcanic ash emitted into the Earth’s atmosphere in just four days from that Icelandic eruption – yes, FOUR DAYS – has totally erased every single effort all of us made to reduce the evil beast, carbon. And there are around 200 active volcanoes on the planet spewing out this crud at any one time – EVERY DAY.

“I don’t really want to rain on your parade too much, but I should mention that when the volcano Mt Pinatubo erupted in the Philippines in 1991, it spewed out more greenhouse gases into the atmosphere than the entire human race had emitted in all its years on earth.”

Yes, folks, Mt Pinatubo was active for over one year – think about it.

It isn’t just volcanoes that form part of Earth’s smoking habit. We mustn’t forget forest fires. The fact of the matter is that the wildfire seen recently across the western USA and Australia alone will likely negate all efforts to reduce carbon emissions for the next two to three years. And such events can happen every year.

Now put into context the telling fact that our planet’s average global temperature COOLED by more than half a degree Celsius from February 2016 to February 2018, according to recent NASA data.

Defying all the expectations for two decades of climate experts NASA’s own data proves our planet has been cooling, despite much higher atmospheric CO2 levels.

Not only cooler despite more CO2, but earth is getting much greener!

There is a further twist in the tail of what we thought we knew about CO2 from the 20th century. A new NASA report shows that the increasing level of CO2 in the atmosphere is making the planet greener!

The NASA study examined the planet’s leaf area index, or amount of vegetation cover across the planet. It found that in the past 35 years, an area of the planet twice the size of the continental United States became greener with vegetation. The main cause, they say, is the rise in CO2 levels! [2] 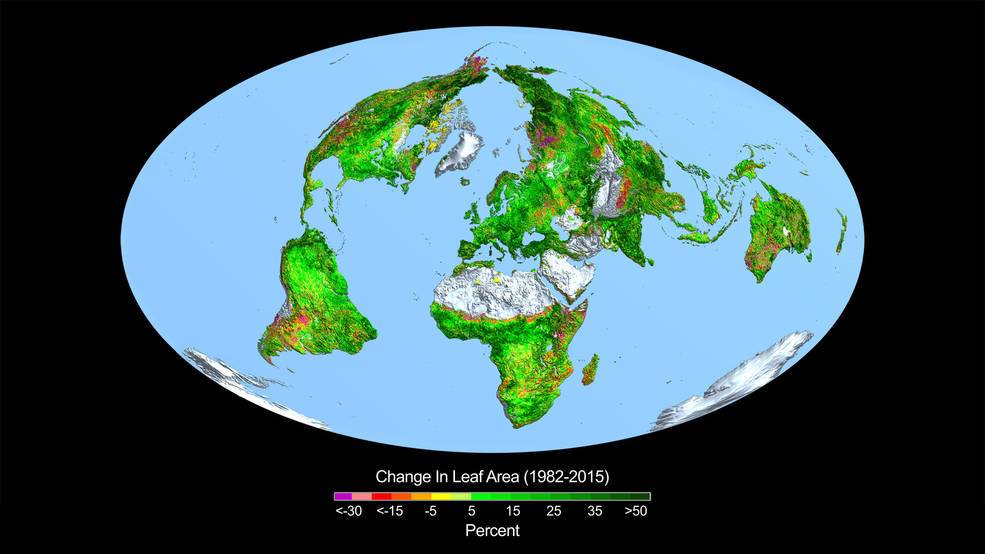 While volcanology and geology are re-writing what we assumed about carbon dioxide from volcanoes, applied scientists from industry are showing evidence that CO2 does not trap heat/delay cooling as claimed in the greenhouse gas theory.

Remember what we were told by ‘experts’ about the perils of higher CO2? Well, they were wrong, their theory was wrong. More CO2 doesn’t mean more warming. Their junk science failed to account for the fact Co2 boosts plant growth removing heat from the atmosphere and thus is a climate cooling effect.

But it gets worse for believers in the greenhouse gas hypothesis – CO2 is proven only to COOL, never warm anything!

Indeed, engineers in applied science are repeatedly  demonstrating that CO2 is nature’s most efficient heat-shifting gas (moving heat from warmer to cooler spaces). Such that it likely removes heat from our planet’s surface, rather than adding to supposed man-made global warming.

Applied scientists have failed to find any possible way to use carbon dioxide to trap or store heat – quite the opposite – CO2 stubbornly reveals itself as one of the best refrigeration gases known to science! 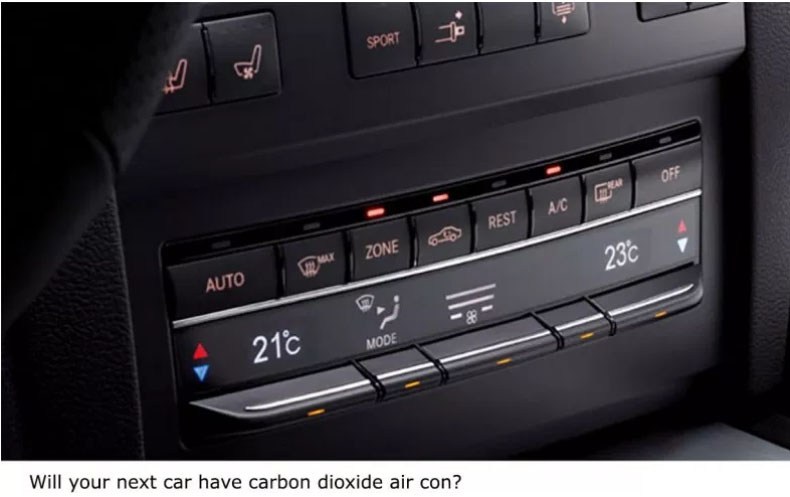 So well does CO2 do the job of cooling things that one of the world’s top car makers, Mercedes-Benz, began installing CO2 air conditioning systems in their vehicles as of 2017. [3]

Since then, Mercedes engineers have shown that the new air conditioning units – fitted in their luxury S Class and E Class cars – are winning acclaim thanks to the switch over to this ‘newly-discovered’ green gas (CO2).

The great irony is that the increased use of CO2 for industrial cooling purposes is because the EU has determined it is better for the environment!

This unexpected news is setting many in the world of government climate research into a spin because it flagrantly it defies their anti-science logic that carbon dioxide is a powerful heat-trapping gas.

But the good news about carbon dioxide as a powerful cooling gas is spreading fast throughout world industry. Now, even ice rinks are increasingly using CO2 to cool their icy playing surfaces.

Until 2014 CO2 was previously used solely as the secondary refrigerant in ice rinks, but CO2 today is also applied as the primary refrigerant. As discussed by Rogstam, CO2-based technology is potentially well suited for ice rinks due to the unique demands of these facilities.

Indeed, this is set out in the updates to the European Union (EU) F-gas Regulation in 2015.

“To further control emissions from fluorinated greenhouse gases (F-gases), the EU updated the regulation in which refrigerants with high global warming potential (GWP) are to be gradually phased out and replaced by substances that fulfill the environmental requirements.” [id]

Since 2014 the interest in using carbon dioxide as a ‘green’ refrigerant gas has grown in Europe  and today seven indoor ice rinks use CO2. This ice rink refrigeration technology has evolved from, and is basically the same as, the one used by the large supermarket grocery chains.

With all these new developments, it is time to remind climate scientists that:

Carbon Dioxide has three ‘absorption’ bands, and per Wien’s Law the absorption is at these wavelengths and temperatures

Absorbing in three incoming solar bands, but only one Outgoing Longwave Radiation band, means that CO2 is a COOLANT.

Mercedes, supermarkets and ice rink manufacturers are showing how practical applications of CO2 prove the OPPOSITE of the deluded claims of climate ‘scientists’ about ‘heat-trapping/delayed cooling’ . In the real world (as opposed to fanciful junk climate computers) CO2 SPEEDS UP HEAT TRANSFER away from a surface! [4]