Far-left ThinkProgress reports that scientists have finally proven that the theory of man-made Global Warming is a total hoax.

Of course, no one will admit it, but that is exactly what has happened. A new scientific study shows has revealed the following:

Current CO2 levels of 410 parts per million (ppm) were last seen on Earth three million years ago, according to the most detailed reconstruction of the Earth’s climate by researchers at the Potsdam Institute for Climate Impact Research (PIK) and published in Science Advances.

Three million years ago, we humans were not driving cars or eating the meat that requires cow farts; we weren’t barbecuing or refusing to recycle or building factories; there was no Industrial Age, no plastic, no air conditioning, no electricity, no lumber mills, no consumerism, no aerosols.

In fact, three million years ago, there were probably no human beings on Earth, at least not human in the way we use that term today. And yet…

CO2 levels were the same then as they are now…

But I thought humans warmed the planet? That’s the hustle we’ve been sold for three decades now — you know, that WE are the problem.

We have also been told the problem is DEFINITELY NOT a billions-year-old planet running through cycles where the temperature might fluctuate a bit. Oh, no, that could never be it — so stop saying that could be, you Denier.

Well, what about the Ice Age that occurred thousands and thousands of years before the Industrial Age.

According to the study, scientists also discovered that during this period of Global Warming “there were no ice sheets covering either Greenland or West Antarctica, and much of the East Antarctic ice sheet was gone.”

How is this possible 2,999,971 years before Arnold Schwarzenegger bought his Hummer?

Temperatures were up to 7 degrees Fahrenheit warmer globally, at least double that at the poles, and sea levels were some 20 meters (65 feet) higher.

How is that possible 2,999,945 years before Americans moved to the suburbs and lit up the charcoal grills?

Naturally, even in the face of a study that totally debunks the whole concept of man-made Global Warming, ThinkProgress is sticking with that hoax but is also forced to concede the following:

The good news is that the Earth does not warm instantly, and mile-thick ice sheets melt even more slowly. So the temperature rise will take several decades, and tens of feet of sea level rise will take hundreds and hundreds of years.

And then ThinkProgress drops this anti-science stink bomb:

That means the choices we make now can affect the rate of rise and determine whether we blow past 65 feet of sea level rise to beyond 200 feet.

Even worse, the climate policy agenda President Donald Trump is pushing — actions that include rolling back U.S. laws that reduce carbon pollution and abandoning the Paris climate agreement — would lock us in to such high CO2 levels, sea levels would rise a foot per decade in just a few decades.

No, actually, what this study proves is that there is nothing we can do to stop  the Earth’s naturally occurring climate cycles. Even the worst of the worst, even the most maniacal pushing the Global Warming Hoax admit that, at best, we can only cool the planet a couple of degrees, which will do next to nothing if the planet is determined to again warm itself by seven degrees, as we now know it did 2,999,998 years before the Bad Orange Man approved a couple of pipelines. 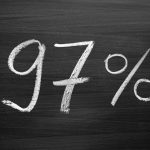 We are confidant that all of our readers have read or heard for a number of years that 97% of all scientists believe that mankind has played a role in changing the earth’s climate. While it should have been recognized long ago as an urban myth, one of those stories that hang around regardless of a lack of any supporting facts. Rarely a day goes that a global warming alarmists do not use it to promote their cause of enlarging government and reducing personal freedom through the promotion of fear about our future.

Many articles have been written to refute this claim but they all dig into the statistical weeds. Common sense alone should set you straight. If the reader wishes he or she read could read the original paper by Naomi Oreskes that started it all in Science Magazine in December of 2004. Be aware you might die laughing.

The biased folks who concluded from a truly bizarre survey of science literature that 97% of all authors believe in man caused global warming would have actually been better served had they concluded that 70% of all scientists believe in their premise. That would actually have been possible. However a little common sense should tell us that no large group of people on our planet could ever reach 97% agreement on anything. Yes anything, including the Earth being round rather than flat or the sun rising in the East rather than West, or even the Earth’s gravitational pull.

Simple proof of this erroneous talking point is provided by the Global Warming Petition Project at the Oregon Institute of Science and Medicine in 2015. They obtained signatures on a Declaration from 31,478 American scientists, including 9,021 with Ph.D.s that stated they did not believe man kind had a significant impact on his climate. The declaration included the words: “There is no convincing scientific evidence that human releases of carbon dioxide methane or other greenhouse gases are causing or will in the foreseeable future, cause catastrophic heating of the Earth’s atmosphere and disruption of the Earth’s climate. Moreover, there is substantial evidence that increases in atmospheric carbon dioxide produce many beneficial effects upon the natural plant and animal environment of the Earth.”

They made all the names available in a paper back book.It is rather doubtful that these people all comprise the 3% of non believers.

We do not doubt there are many scientists who do believe that man plays a major role in the determination of his climate. However, among the unsuspecting public who do not stop to consider what we are saying, the near universal comment of “the 97%” has done a lot of damage. It leads to poor anti fossil fuel legislation in states all across the nation. It leads to some states embracing the Paris Accord which would redistribute $3 trillion of American dollars to nations who use little fossil fuel. These American states could have none but zero impact on the planets thermometer but they can and will damage their state’s economy and their citizens standard of living.

The fraudulent 97% consensus is clearly a marketing ploy. What makes science different from religion is that only empirical evidence matters not opinion. Consensus does not matter at all in science.

It is not unique in science for incorrect views to hold forth for decades if not centuries before the crowds are turned back by incontrovertible evidence. Medical history is full of the minorities trying to make surgery safer by the simple effort of hand washing. Ulcers were long thought to be a result of type “A” personalities rather than requiring a specific bacteria to allow their development. Einstein himself fought an uphill battle with his theory of relativity. When 100 German scientists collaborated on a consensus to defeat him he said famously “If I were wrong one would have been enough”.

Give some thought to what we are saying next time you are confronted with this dangerous absurdity, which will likely be tomorrow.

Corruption Of The US Temperature Record

In this video I explain the corruption of the US temperature record by NOAA and NASA – and show that their justifications for data tampering are not scientifically valid. Video: Tony Heller