Four months later, and the performance of the global manufacturing sector remained depressed in April. This is the month where global trade data should trough, in preparation for a 2H rebound. However, that is not the case – as a synchronized global downturn intensifies.

IHS Markit reported that rates of global expansion in output, new orders and employment were fragile, and below their long-term trend lines, while new export data dropped.

The J.P.Morgan Global Manufacturing PMI, a composite index produced by J.P.Morgan and IHS Markit in partnership with ISM and IFPSM, posted 50.3 in April, down from 50.5 in March, teetering on the edge of contraction, to record its lowest level since June 2016. 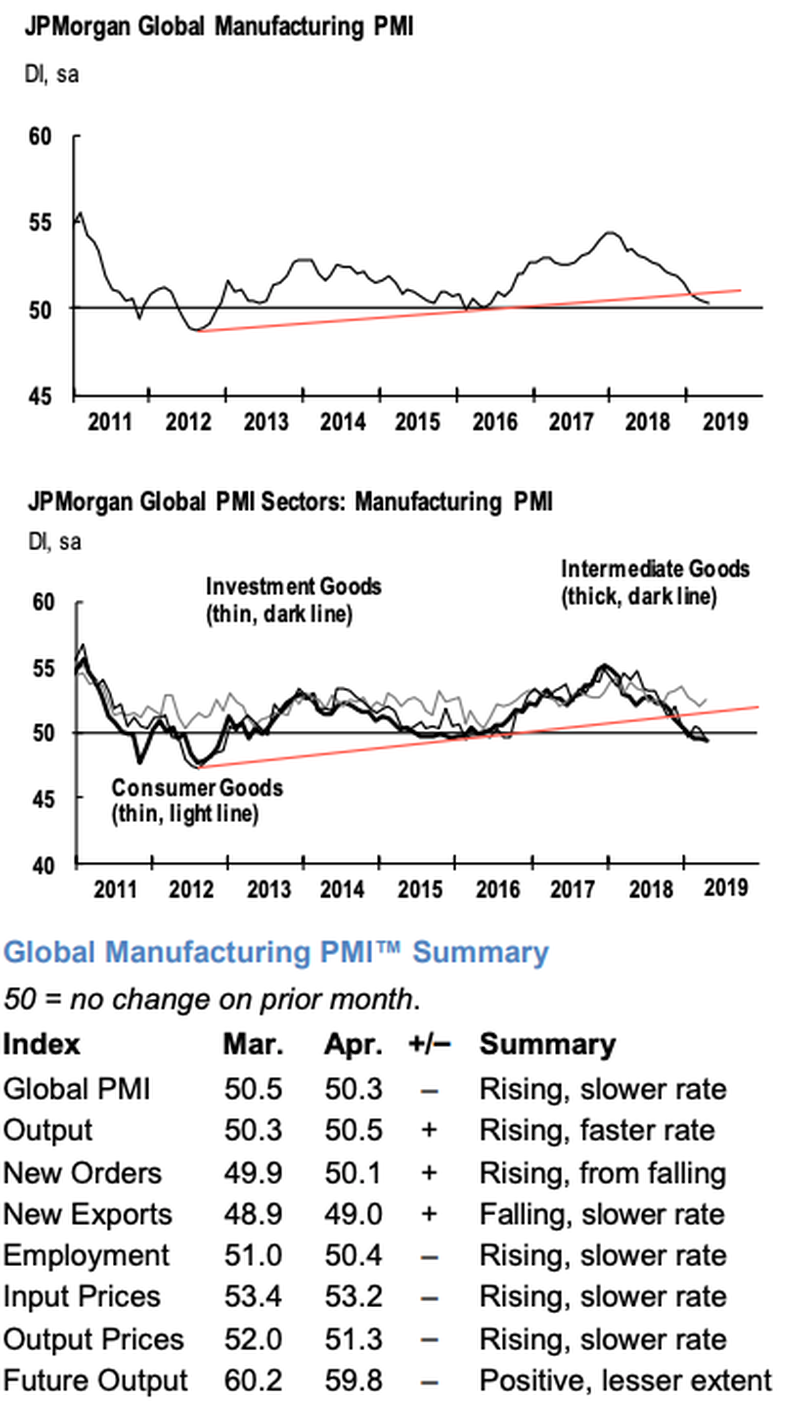 “The weakness in the global manufacturing sector was most evident in the intermediate and investment goods sectors, both of which saw production and new orders contract during April. The consumer goods industry fared better, with growth of both output and new business accelerating during the latest survey month. Consumer goods was also the only category to see new export work increase, albeit only moderately,” said IHSMarkit.

The decrease in export business was widespread for the eighth consecutive month. Softness was observed in Greater China, the Eurozone, Brazil, the UK, South Korea, Turkey, the Philippines, Canada, Mexico, Australia, Poland, and the Czech Republic.

“The global manufacturing sector remained subdued at the start of the second quarter, with the PMI barely above the 50.0 mark and rates of expansion in output and new orders still lackluster and well below long-run trend levels. In particular, the capital goods sector PMI underscores that business capex remains stalled. International trade flows remain a significant drag on the manufacturing sector. New export business has now decreased for eighth successive months,” David Hensley, Director of Global Economic Coordination at J.P.Morgan said.

The International Monetary Fund warned last month: this is a “delicate moment” for the global economy as many countries are experiencing a severe slowdown.

Lagarde pinned the deceleration of global growth on “the impact of increased trade tensions.”

Not surprisingly, the stock market’s 2019 uptrend has ignored the deterioration in global growth, as investors focus on trade optimism and a dovish Federal Reserve that has expanded the market’s P/E multiple. However, with President Trump’s surprise threat to raise the 10% tariff on $200BN of Chinese goods to 25% on May 10 in what BofA has called a “major escalation” – the whole narrative of expanding multiples in preparation for a 2H rebound could all but be fantasy at this point.

It was a startling statement for the time. Mario Draghi had only been on the job as President of the European Central Bank for a few months by then, taking over for the hapless Jean Claude-Trichet who was unceremoniously retired at the end of October 2011 amidst “unexpected” chaos and turmoil. It was Trichet who contributed much to the tumult, having idiotically raised rates (twice) during 2011 even as warning signs of crisis and economic weakness were everywhere.

Central bankers had built their platforms on dismissing problems. “Subprime is contained” the mantra for Euro$ #1 was later replaced by “Greece isn’t a big deal” in time for Euro$ #2. Neither had anything to do with the global monetary situation, precisely the point.

Still, Draghi as much in the dark about it as Trichet had to show the world he was serious and therefore, supposedly, different from his predecessor. Sticking with the PIIGS theme, the new head of the ECB having just launched massive LTRO’s tried to sound reasonable about them. Sitting down for an interview in Frankfurt with the Wall Street Journal, the Italian wowed them:

You know there was a time when [economist] Rudi Dornbusch used to say that the Europeans are so rich they can afford to pay everybody for not working. That’s gone.

This was February 2012. The implications were clear, and it would define the way in which everything would later unfold – including Draghi’s infamous promise to “do whatever it takes” to save the euro uttered a few months later.

This was all Southern Europe’s fault. A touch of German in his voice, Draghi was saying that Germany couldn’t and shouldn’t be counted on to bail out Continent. Not just in financial matters, but in overall economy, too. 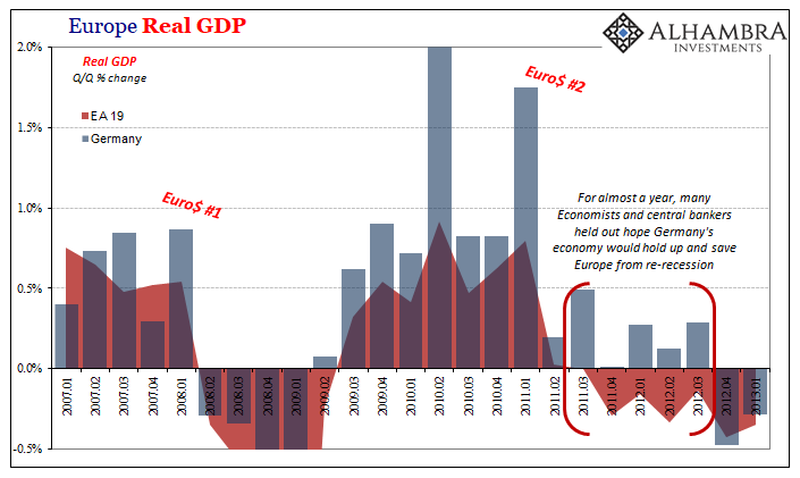 By Q4 2011, European GDP had turned negative. It was a huge shock coming so soon after the Great (somehow global) “Recession.” Trichet, after all, had proclaimed the recovery a success despite Greece and Italy.

German GDP decelerated, too, only for much of 2012 it stayed positive and buoyed spirits and projections. Perhaps Germany’s economy itself supported by robust “global growth” could do it. Its vast factory sector was a gateway to the rest of the world, especially Asia, which didn’t have to fuss over Portugal and Ireland’s fiscal situations. 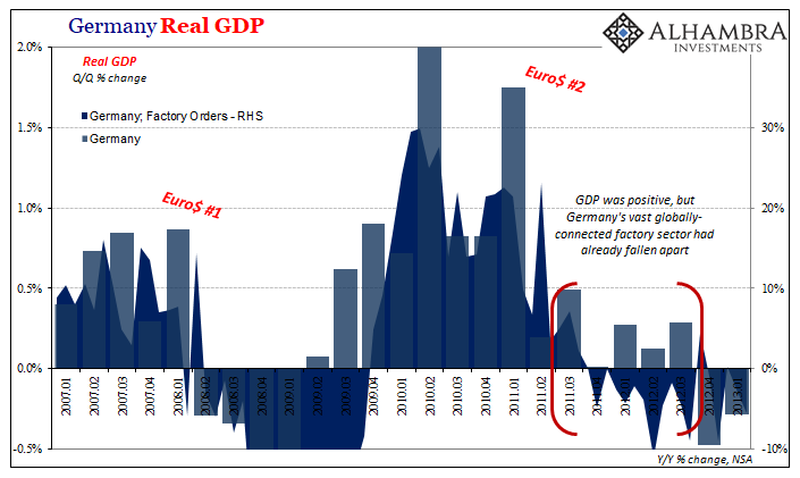 As with most central bank projections, however, these amounted to subjective hope predicated on managing expectations. Nowhere was there sound let alone rational analysis. Germany’s factory sector was itself already in recession alongside most of Europe. GDP in the country might’ve stayed positive, but every indication for convergence to the downside was available early in the year 2012.

It wasn’t until November that officials admitted the whole of Europe was in trouble, not just the Southern region. Sticking to the premise that it was PIIGS anyway who eventually dragged down the north, Draghi and the rest committed much the same error as Trichet. They never figured out what was really wrong and therefore never really fixed it. 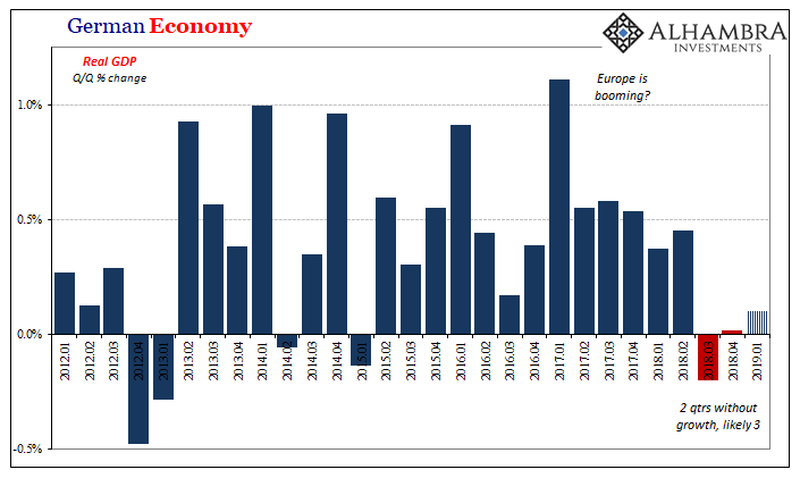 Here we are all over again, only with the roles somewhat reversed. In 2018 and now 2019, it’s Germany which is leading toward the downside. This isn’t to say that the South is a towering pillar of economic strength; far from it. In terms of relative weakness, right now the German economy is near the top.

According to DeStatis, the German government’s number crunching agency, Real GDP growth was negative in Q3 and basically flat in Q4. Current expectations are that output accelerated a little in Q1 2019, maybe as much as 0.1% growth (DeStatis will report next week on Q1). It’s not the specific expectation but the trend – slowly getting better, from autumn and winter gray back into spring and summer green. 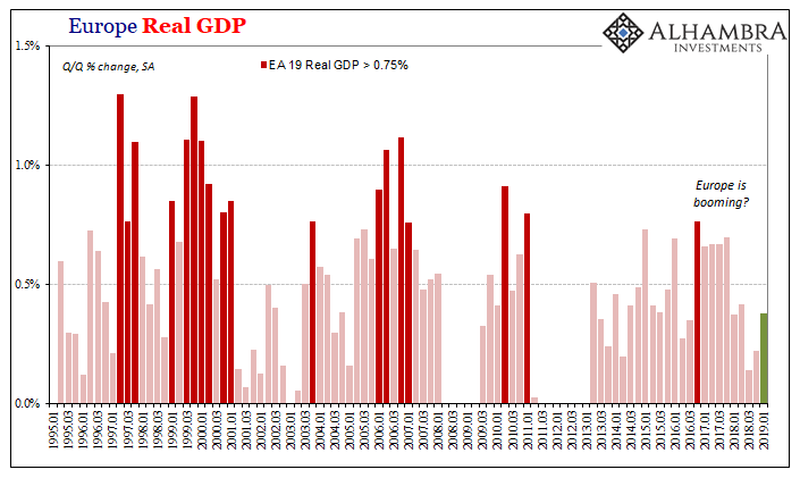 The season for these green shoots gained a little more color when last week EuroStat reported Q1 2019 GDP for the whole of Europe came in at 0.379% quarter over quarter. It seems to confirm the idea that the soft patch was just that; a transitory combination of one-off factors lazily dissipating so that the boom can eventually resume (next year, perhaps).

For that to happen, though, Europe needs to resolve Germany’s weakness. Mario Draghi as much as any other central banker is counting on “global growth” to resynchronize on the plus side. German problems suggest it would be wise not to. 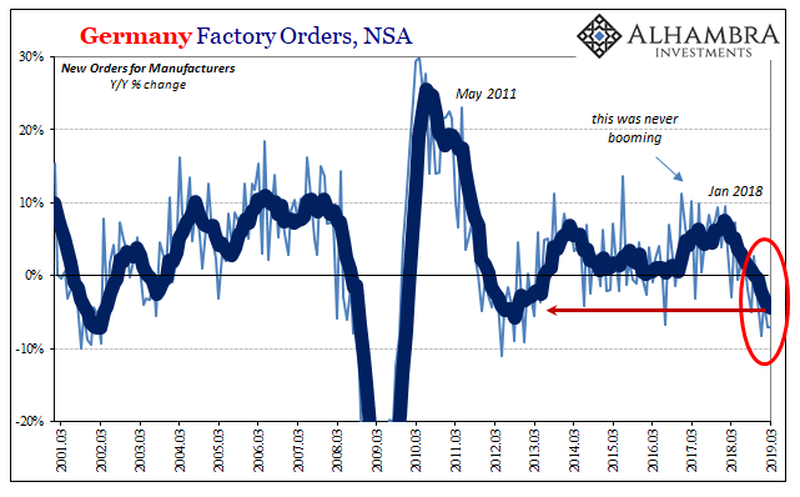 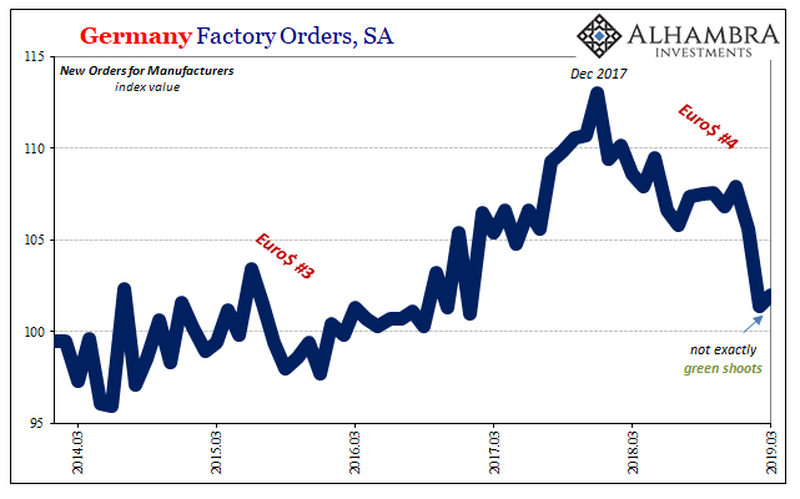 While GDP may be positive again in Q1, maybe like 2012 for a few quarters thereafter, German industry is still under pain of severe contraction. DeStatis reports today that unadjusted factory orders, a leading indication, were 7.2% less in March 2019 than in March 2018 (which were 3% less than in March 2017).

It was the fifth consecutive month of contraction, four of them at rates consistent with 2012’s Europe-wide recession. Seasonally-adjusted, factory orders were a tiny sliver higher in March than in February, not at all the same thing as green shoots considering the steep drop in them starting last December.

Does Europe’s economy rebound without Germany? Can the German economy contribute without its factories? What is the global economy really like? 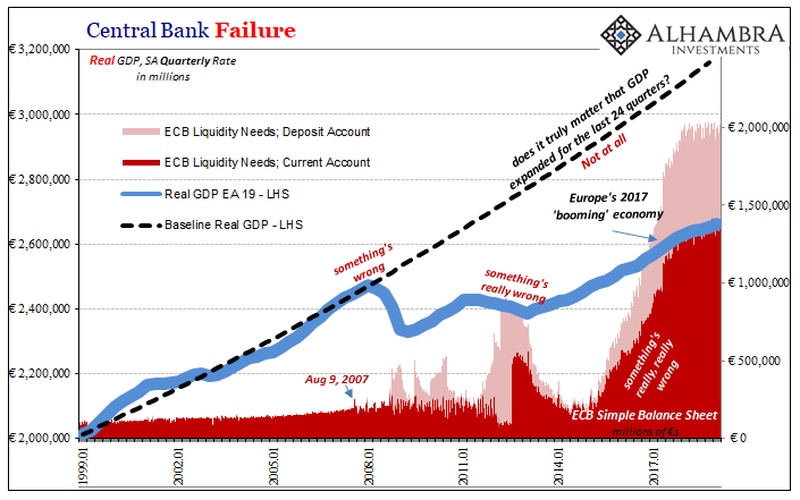 The bond market version including expected rate cuts in the United States is not nearly as far-fetched as many claim; nearly all those claims beginning with central bank models, forecasts, and “analysis.” Central bankers have had it all wrong all along. Lumbering toward his own looming retirement, Mario Draghi has fully proved himself no different than Trichet.

To be “counting on global growth” at the same time as the same “green” globalists are putting up red tape and taxes at a high pace (“Carbon-Tax”), is documenting disconnect and dishonesty.

What they are hoping for is new trade deals between the US and China, the US and Mexico + Canada to fuel the world economy so they doesn’t have to deal with their slow growth.

Let’s face it, socialists are hardly capable of solving any problems (look at Venezuela), and not even when they import criminals and terrorist from the third world are they capable of getting positive growth (sarcasm alert).