This time National Geographic’s ‘Hostile Planet’ series laughably claims a fat polar bear that’s caught a beluga calf off the coast of Western Hudson Bay has been saved from starvation!

The message: here is a prime example of climate change pushing a species to its limit. This is nonsense, of course: polar bears hunting beluga whales from rocks has nothing to do with climate change or desperately hungry bears.

More importantly, there is a much better video of the action that is both more informative and truthful.

See both below and decide which you’d prefer your kids or grandkids to watch.

First, here is the polar bear sequence from the ‘Hostile Planet’ series, which it has clearly released for distribution to the media:

Applying standard media hyperbole, Rolling Stone Magazine rephrased this to read: “See a Starving Polar BearHunt for Beluga Whales” as if viewers can’t see the rolls of fat on this bear with their own eyes.

“Some scientists fear a third of the polar bears in the world may be gone by 2030 due to climate change and how it will affect future sea conditions. To show how the species is struggling to survive as they search for food, National Geographic captured a moment where a starving polar bear hunts a pod of beluga whales in open water in Canada’s Hudson Bay. Featured in Hostile Planet‘s finale on Monday, it’s a chilling a reminder of how the Arctic predators are desperate to find prey to meet their needs.

The six-part nature docuseries, hosted and narrated by Bear Grylls, zooms in on the world’s most extreme habitats to reveal the animal kingdom’s most dramatic stories of survival on our changing planet.

Wildlife Guides On The Ground

However, we know from reports from guides at the Seal River Heritage Lodge that polar bears hunting beluga from rocks were observed in late summer (August/September) 2017 at the mouth of the Seal River, which is north of Churchill on Western Hudson Bay (see map below).

This was the same summer a litter of triplet cubs was spotted in the area, discussed in the same report. 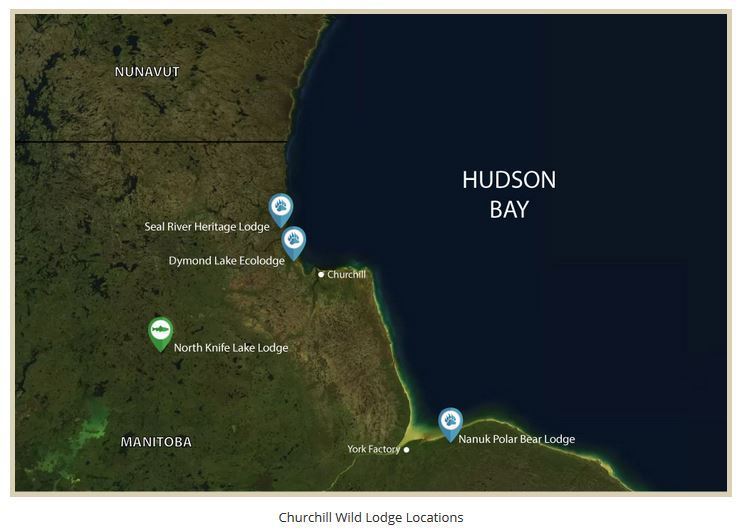 A photo of a Seal River polar bear hunting beluga from a rock, late summer 2017: 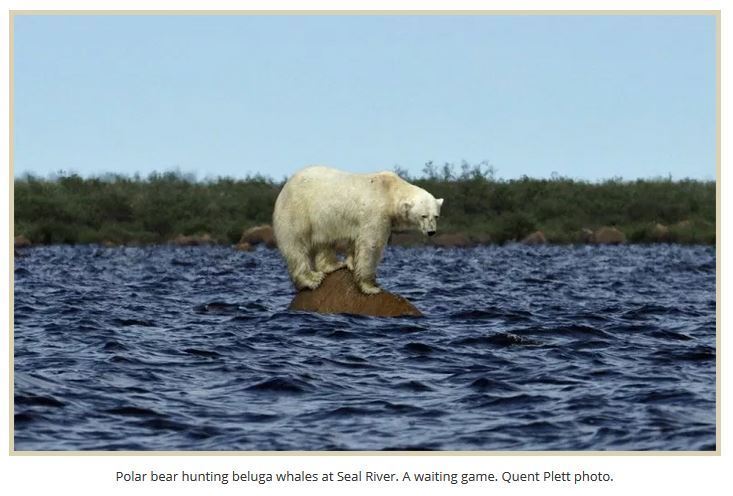 As the video below, from CBC’s “The Wild Canadian Year: Summer” narrated by David Suzuki of “The Nature of Things” (uploaded 8 December 2018 to Youtube).

I’m no fan of Sukuki’s stance on climate change but am happy to report it does not enter the narrative here, at least in the polar bear clip (I haven’t listened to the rest).

The polar bear hunting beluga sequence starts at 36:50 with the catch at about 42:00 (Only available to Canadians).

Clearly, dozens of bears have learned this hunting strategy – probably after watching one local individual give it a try.

Polar bear cubs learn hunting skills by watching their mothers, so they are primed to learn a new skill by watching other adults do it. These bears are very smart and learn quickly.

This new hunting strategy had nothing to do with being ‘desperate’ for food, since the bears shown in this video are in excellent condition, as were most bears that summer.

Fall freeze-up came early in 2017 (and again in 2018), so they had a shorter wait than usual before they could hunt seals from the ice again.

However, polar bears hunting beluga whale calves in open water is not unheard behavior that has only emerged recently due to climate change: researchers in the 1980s saw bears in the Canadian Arctic hunt beluga calves close to the shore of Somerset Island in a similar if not identical manner (ironically, this is the same island where NG’s equally misleading ‘starving’ polar bear was filmed in 2017).

In one case, rather than using a rock, a big male bear in 1985 used an isolated pan of ice as a platform from which to leap onto beluga calves swimming in the water (Smith and Sjare 1990:100).