Everything by and from the left is FAKE – From FAKE climate alarmism, FAKE rape victims to FAKE families at the southern border .. FAKE, FAKE, FAKE!!

Last month’s Gallup poll found climate change was the ninth most important issue, coming in at a mere 3 percent. That result also combines climate change with the environment and pollution.

Get ready to put on your shocked face. Rep. Alexandria Ocasio-Cortez, head cheerleader for the ridiculous Green New Deal, is trying to mislead people into thinking climate change is at the top of America’s political agenda. 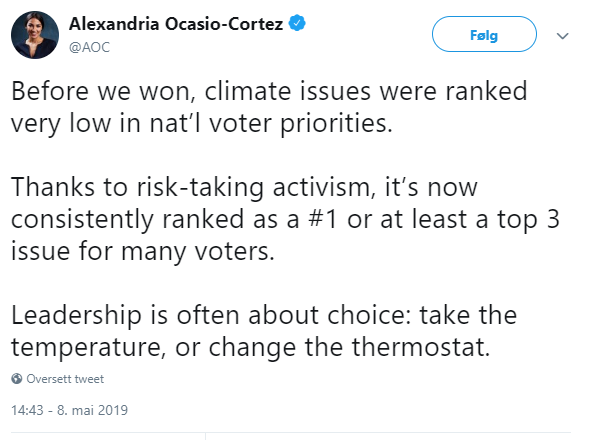 If Ocasio-Cortez is not being “false, but accurate” here, her claim might still be classified as “true, but inaccurate.”

When Ocasio-Cortez refers to “many” voters, she appears to be referring to polls of Democrats. As reported in Politico: “A Monmouth University poll last month showed the issue as the second most important to Iowa caucus-goers after health care, and a CNN national poll found that 82 percent of Democratic respondents said it’s ‘very important’ that their party’s nominee for president supports taking ‘aggressive action’ to slow the effects of climate change, the highest support among several items on the progressive wish list.”

Last month’s Gallup poll found climate change was the ninth most important issue, coming in at a mere 3 percent. That result also combines climate change with the environment and pollution. The figure for Democrats is only eight percent.

A recent Pew poll found 44 percent of Americans rating climate change as a top priority—but that response came in seventeenth of eighteen answers. It is hard to argue the seventeenth choice is truly a “top” issue.

Admittedly, these are polls of adults, not voters. But given how low climate change ranks, it is wildly unlikely the results would have differed significantly (and might have produced worse results for climate change). In short, while Ocasio-Cortez can get away with claiming “many voters” think climate change is a top issue, it is almost certain that “many more” do not, and the many who do are already solidly Democratic voters.

Why would Ocasio-Cortez be so obviously misleading? Perhaps she knows her pet cause is stalling out in Congress and hoped to rouse her followers to push House Democratic leadership on an issue that is at least popular among Democrats.

On the other hand, Ocasio-Cortez has misinformed people on a range of issues during her short tenure in Congress. Even the biased “fact-checkers” at PolitiFact, FactCheck.org, and the Washington Post have been unable to avoid this entirely (even if they give her too much slack). She may be acting out of confirmation bias or simple ignorance.

While the progressive activists are disproportionately white, this demographic was key to Ocasio-Cortez’s upset primary victory over incumbent Joe Crowley. As reported (again) by Politico: “Ocasio-Cortez’s best precincts were places like the neighborhood where [actor Daniel] Bonthius and his friends live: highly educated, whiter and richer than the district as a whole. In those neighborhoods, Ocasio-Cortez clobbered Crowley by 70 percent or more. Crowley’s best precincts, meanwhile, were the working-class African-American enclave of LeFrak City, where he got more than 60 percent of the vote, and portions of heavily Hispanic Corona. He pulled some of his best numbers in Ocasio-Cortez’s heavily Latino and African-American neighborhood of Parkchester, in the Bronx—beating her by more than 25 points on her home turf.”

Ocasio-Cortez may be representing her wealthier white constituents on this, just as she did in opposing the location of Amazon’s second headquarters in Long Island City. But it is a boutique issue that will not move votes Democrats don’t already have. The presidential candidate making it his signature cause, Jay Inslee, is currently polling at an asterisk. As the frog once sang, it’s not easy being green.