Via CFACT, by Mark Mathis

When evaluating extremely important information do you rely on shaky data or unverified research? Of course not. But that’s what many climatologists and their cheerleaders in the press and politics are asking us to do with climate change. They want us to commit trillions of dollars to make giant societal changes with only a poor understanding of climate dynamics and man’s potential impacts to climate variability. Guest host Marc Morano of CFACT’s Climate Depot explains.

Example of bad science. Imagine if you actually could measure the oceans temperature that accurately .. an increase of 0.05°C (before the normal leftists adjustments) is, well, the same as no change, no increase. That, again, proves humans effect on the climate is nothing.

Comparison of global climatologies confirms warming of the global ocean 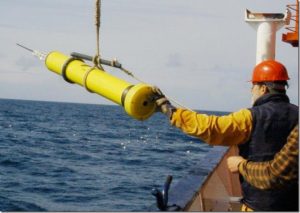 IMAGE: Deployment of an APEX float from a German research ship. Credit: Argo

By Charles the moderator – WUWT

The global ocean represents the most important component of the Earth climate system. The oceans accumulate heat energy and transport heat from the tropics to higher latitudes, responding very slowly to changes in the atmosphere. Digital gridded climatologies of the global ocean provide helpful background information for many oceanographic, geochemical and biological applications. Because both the global ocean and the observational basis are changing, periodic updates of ocean climatologies are needed, which is in line with the World Meteorological Organization’s recommendations to provide decadal updates of atmospheric climatologies.

“Constructing ocean climatologies consists of several steps, including data quality control, adjustments for instrumental biases, and filling the data gaps by means of a suitable interpolation method”, says Professor Viktor Gouretski of the University of Hamburg and a scholarship holder of the Chinese Academy of Sciences’ President’s International Fellowship Initiative (PIFI) at the Institute of Atmospheric Physics, Chinese Academy of Sciences, and the author of a report recently published in Atmospheric and Oceanic Science Letters.

“Sea water is essentially a two-component system, with a nonlinear dependency of density on temperature and salinity, with the mixing in the ocean interior taking place predominantly along isopycnal surfaces. Therefore, interpolation of oceanic parameters should be performed on isopycnals rather than on isobaric levels, to minimize production of artificial water masses. The differences between these two methods of data interpolation are most pronounced in the high-gradient regions like the Gulf Stream, Kuroshio, and Antarctic Circumpolar Current,” continues Professor Gouretski.

In his recent report, Professor Gouretski presents a new World Ocean Circulation Experiment/ARGO Global Hydrographic Climatology (WAGHC), with temperature and salinity averaged on local isopycnal surfaces. Based on high-quality ship-board data and temperature and salinity profiles from ARGO floats, the new climatology has a monthly resolution and is available on a 1/4° latitude-longitude grid.

“We have compared the WAGHC climatology with NOAA’s WOA13 gridded climatology. These climatologies represent alternative digital products, but the WAGHC has benefited from the addition of new ARGO float data and hydrographic data from the North Polar regions”, says Professor Gourteski. “The two climatologies characterize mean ocean states that are 25 years apart, and the zonally averaged section of the WAGHC-minus-WOA13 temperature difference clearly shows the ocean warming signal, with a mean temperature increase of 0.05°C for the upper 1500-m layer since 1984”.