In the last few years, president Trump has been the primary target of social media and search engine manipulation of the algorithms used for the social engineering of entire populations, as the DailyMail quantified a few days ago.  The bias is between 2:1 and 3:1 to the advantage of leftist media,  but unfortunately this is not being addressed.

What is, is equally important, is the silencing of individual voices and deplatforming, Facebook’s locking out Robert Spencer and shadow banning this site, as well as many others.

It’s the using of broken shields on websites such as ours, implying that in some way the site is unsafe, maybe malicious and not to be trusted.

I see it daily in the comments on this site, “I lost my Twitter account for saying…”.  The right to free speech is being eroded rapidly. I don’t bother with social media accounts anymore, as they get mass reported because of my connection here.  That’s just not right. Facebook, Twitter and Google are now monopolies and they have a duty to act fairly and without bias.

We have hundreds of articles on this site referencing free speech.

Amy Mek, is constantly and aggressively attacked online, and Twitter allows this.

It’s now fairly common for defenders of human rights and dignity to be threatened following complaints about the breaking of sharia law. I have seen dozens affected by Twitter enforcing sharia law at Pakistans request such as here at michellemalkin.com.

Being unable to raise funds to generate content by Patreon or even have a credit card account is another attack on defenders of democratic values.

But back to President Trump (sadly not mine, I suffer under the government leadership of a little potato), the White House has launched a campaign to collect evidence from those affected:

The Trump Administration is fighting for free speech online.

You can fill out the details of how you have been affected HERE. We can only hope that they will use this evidence to hold these tech giants to account, and break the lie that they are unbiased. This defines behavior fascism. Fox news ran a great piece on the recent mass banning by Facebook.

I believe the banning of James Woods was just one ban too far for the president.

Newscats Hasslefree Allsorts is the result of an instance of censorship by Facebook. Now i do not use Facebook anymore and are being read by 1000’s each day instead of the 4 individuals Facebook’s algorithm previously were allowing to see my posts.

Imagine that, – when your news are so good you actually need to hire external resources to fact check what your own news outlet are publishing, think about that for a few seconds – Then just permit yourself to laugh out loud … They are actually documenting their own dishonesty and incompetence.

.. and as all Nazi-leftists, they need to keep track of what their “neighbors are doing” – Like all Nazis, they are never happy unless they are unhappy, and if they can ruin something by spreading lies, smear and low IQ., Alinsky style ad hom, – WOW! That really makes a Nazi happy – for several seconds!

Microsoft has now placed a warning label on Jihad Watch for those who use its Edge browser: 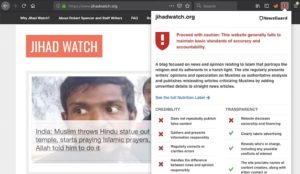 This once again raises the question I keep asking again and again: quis custodiet ipsos custodes? Who watches the watchmen? According to the BBC, NewsGuard warnings have also appeared on the Daily Mail and Sputnik. But what about NewsGuard itself? Is it fair? Unbiased? Trustworthy? No to all three; it is just another “fact-checking” organization with entrenched Leftist biases that is flagging sites that don’t hold firmly to the Leftist line as inaccurate, without acknowledging their own biases, gaps in knowledge, or inconsistency.

This is just another way to shut down sites that don’t parrot the Leftist agenda, which includes embracing of mass Muslim migration and staunch opposition to any opposition to jihad terror and Sharia oppression. The Southern Poverty Law Center (SPLC), which NewsGuard relies on extensively in its hit piece on Jihad Watch, has long designated Jihad Watch as a “hate group.” The idea that it’s “hate” to oppose jihad mass murder and Sharia oppression of women, gays and others is defamatory and absurd, but nonetheless it has resulted in donations to Jihad Watch not being accepted by MasterCard and Visa, and in my being dropped from Patreon and GoFundMe. It has also resulted in my being shadowbanned on Twitter and Facebook, and routinely vilified in the establishment media.

And now, if all that doesn’t work, and you still come to Jihad Watch via Microsoft Edge (and other browsers will almost certainly follow), you’ll get a warning label falsely claiming that our work is inaccurate.

They’re desperate to silence me and shut down Jihad Watch, and while they may well succeed, they will not thereby turn truth into falsehood and falsehood into truth. The truths we expose here will remain, and they will be dealing with them sooner or later, no matter how much they deny and ignore them.

Last summer, when John Gregory of NewsGuard contacted me, I wrote an article at FrontPage about the spurious “fact-checking” procedures of Gregory and his cohorts. It’s worth reprinting in full here now:

Steven Brill’s NewsGuard and the “Fact-Checking” Scam
Who watches the watchmen?

In their ongoing efforts to discredit, marginalize, and silence all those who dissent from their agenda, Leftists are increasingly trying to fool the public by establishing ostensibly neutral “fact-checking” organizations that purport to identify “fake news,” but which actually apply that label only to those who don’t parrot their nonsense. One of the most notorious examples of this is Snopes, which claims to be an objective arbiter of the accuracy of news reports, but which I have shown to be a deeply biased and misleading site: see here and here.

Recently I was contacted by John Gregory, an underling from a new entry in this field, NewsGuard, an initiative of the hard-Left self-appointed news arbiter Steven Brill. It was obvious that Gregory’s pen was sweating blood, and in my answers, I asked him about his own biases and those of NewsGuard. Gregory, as you’ll see below, ducked my questions, but his biases (and NewsGuard’s) are nonetheless obvious from his invocation of the Southern Poverty Law Center, his claim that it is inaccurate to say that the UN supports jihad, and more. He claims that his opinions are not relevant, but of course they couldn’t be more relevant, because they inform how he regards and evaluates Jihad Watch and other news sites. His refusal to acknowledge that, and to explain how he claims to overcome his own biases and produce an objective evaluation, is evidence of either astonishing naivete or craven dishonesty.