Last week, the World Wildlife Fund proclaimed May 10 to be Europe’s “Overshoot Day,” the day that Europe consumed its portion of Earth’s resources for the year. The WWF, the United Nations, and universities continue to warn that modern society is rapidly depleting our natural resources. But instead, trends show that for all practical purposes, Earth’s resources will never run out.

The World Wildlife Fund proclaims August 1 this year as Earth Overshoot Day, where society will have used “more natural resources than the planet is able to produce in a 12-month period.” They estimate that Overshoot Day for the United States occurred already in March, warning that the US is using four times its share of sustainable global resources.

Overshoot Day is a continuation of the long-running ideology that humans are consuming too much of Earth’s resources. Environmentalist David Suzuki said, “We live in a world of finite resources. Although it may sometimes seem quite big, Earth is really very small―a tiny blue and green oasis of life in a cold universe.” Margaret Beckett, UK Environment Secretary pointed out in 2006, “It is a stark and arresting fact that, since the middle of the 20th century, humankind has consumed more natural resources than in all previous human history.”

Price trends are usually a good indicator of resource scarcity. The World Bank maintains a world commodity price database of 41 commodities from 1960 to present. Inflation-adjusted trends show that from 1960-2015, food prices have declined, agricultural raw material and industrial metal prices have been flat, and energy prices, dominated by the price of oil, have increased. Commodity prices fluctuate widely from decade to decade, but we don’t see a rising price trend indicating resource exhaustion. 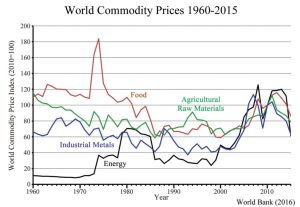 Global production of industrial metals soared from 1960-2014. Annual production levels were up: aluminum (996 percent), copper (417 percent), iron ore (531 percent), lead (343 percent), nickel (455 percent), tin (66 percent), and zinc (348 percent). At the same time, the World Bank industrial metal real price index of these seven metals was flat, down a little more than one percent by 2015. World reserves of copper, iron ore, lead, and zinc stand near all-time highs. Prices are not rising as predicted by resource-depletion pessimists. 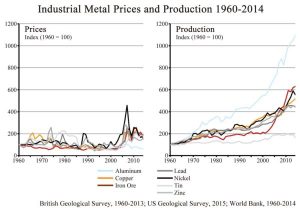 Consider the miracle of copper refining. Rock containing copper is fragmented by explosions and then loaded onto huge trucks with 240-ton capacity. Each ton of rock contains only 13 pounds of copper. The copper ore then goes through a series of milling machines that grind the rock down to a fine powder. Next the powder goes through a flotation cell, where the copper floats to the top of a solution and is skimmed off, producing 28 percent copper concentrate. Three different furnaces come next, smelting the metal into 98 percent copper. Finally, electrolysis is used in a half-mile-long factory to produce ingots that are 99.99 percent copper. Advancing human technology continues to produce high-quality copper from ores of declining copper concentration.

There are 57 million such square miles of Earth’s land surface and almost triple that area under the surface of the oceans. Of course, only a tiny fraction of metals in Earth’s crust is economically recoverable with today’s technology. Nevertheless, Earth’s supply of raw materials is finite, but vast.

But aren’t we running out of hydrocarbon energy? In 1977, President Jimmy Carter told the nation, “World consumption of oil is still going up. If it were possible to keep it rising during the 1970s and 1980s …we could use up all the proven reserves of oil in the entire world by the end of the next decade.”

President Carter and his advisors were wrong. Petroleum engineers changed the world with the technological advances of hydraulic fracturing and horizontal drilling. United States daily oil production more than doubled from 5 million barrels in 2008 over 12 million barrels today. US natural gas production also doubled over the last decade. 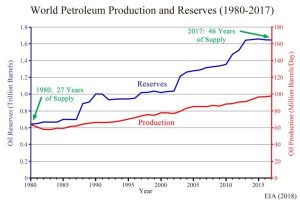 From 1980-2017 world petroleum production increased more than 50 percent. But world crude oil reserves increased 150 percent, from 27 years of supply to 46 years of supply at higher production rates. The same doomsayers that continue to forecast resource depletion were certain we had reached peak oil a decade ago.

Today, humanity has the greatest abundance of resources in history. Human ingenuity determines resource availability, not the amount of fruit on a tree or the number of rocks on the ground. Driven by advancing human technology, for all practical purposes, Earth’s resources will never run out.

This article originally appeared in The Washington Times