There are physical laws setting the frames of possible rate of sea level rise, rate of ice melting and thermal expansion of water (Figure 1).

As true scientists, we must provide statements and estimates that respect those frames (i.e. lie within the blue box of Figure 1). Ignoring the frames, and you are in the pink field of nonsense. 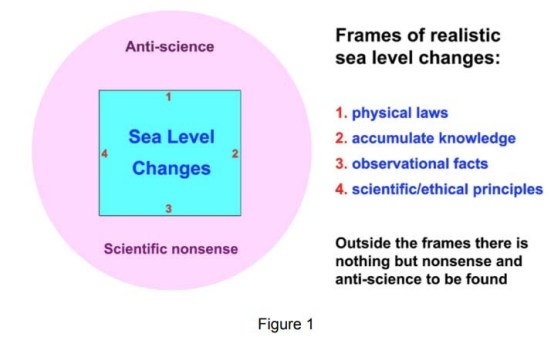 Recently (and just in time of the EU election in Europe), a paper has appeared, which surely represents another visit to the “pink field of nonsense”. The paper is written by a well-known group of IPCC/AGW proponents (Bamber et al., 2019). Significantly, there is not a single reference to observational facts in nature itself, documenting a diverging reality.

The paper was published in the PNAS journal, notorious for publishing anything in favour of scaremongering data with wild exaggerations on temperature rise, sea level rise and ice melting. The paper was edited by Rahmsdorf and accepted by Schnellnhuber, both notorious proponents for the IGCP/AGW ideas. This means that the paper, in fact, was not peer reviewed but “pal reviewed”. Again, typical actions for persons operating “in the pink field of nonsense” of Figure 1.

The central message from the strongly twisted statements presented by Bamber et al. in the PNAS journal (May 2019), is, and I quote: We find that a global total SLR exceeding 2 m by 2100 lies within the 90% uncertainty bound.
A rise in sea level by 2 m in 80 years would imply a rate of sea level rise of 25.0 mm/yr. This is far into the pink field of nonsense, way beyond the frames of realistic sea level changes. 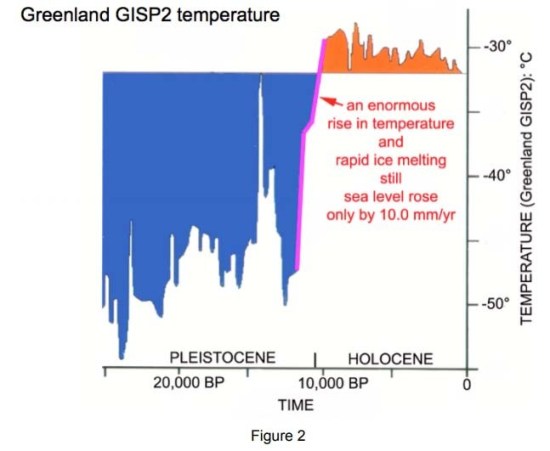 This is a clear manifestation of the level of nonsense, and the total ignorance by the authors of physical laws and observational facts. Obviously, they have an agenda to propagate for ideas keeping human fear alive.

With fear you can twist the human heart in whatever direction wanted. But this is very far from acceptable scientific principles. Let us put the paper by Bamber et al. in the file of statements to ignore and forget.