Alexander described as a ‘speaking mummy’ found by hunting dogs close to death after a month. UPDATED!

The emaciated man from Russia’s remote Republic of Tuva was preserved as ‘tin-can’ food to eat later by a brown bear, say local reports in the region.

A group of local hunters found Alexander after their dogs refused to leave the area of the den.

Their persistent barking pushed the hunters to check inside the lair, where they found a barely-alive man. He was rushed to the local hospital and has been diagnosed with a broken spine and severe emaciation.

Alexander remembers his first name but not his age, and was reportedly in the den for around one month, drinking urine to survive.

He is now in the intenstive care with multiple injuries and rotting skin.

He can move his arms, local hospital doctors said. 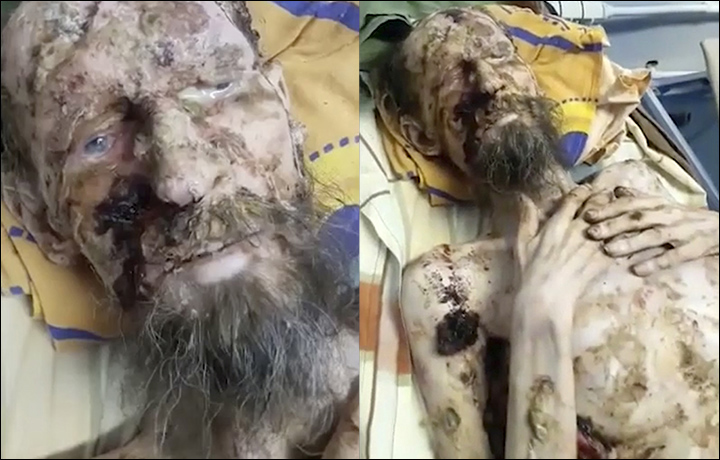 A video shows Alexander opening his blue eyes and confirming his first name.

It is as yet unclear if he was a hunter, too, and how his encounter with the bear happened.

He managed to explain that he was attacked and dragged inside the den when he broke his spine.

The attack happened approximately a month ago, Alexander said.

‘The bear preserved me as food for later’, he explained.

A video filmed inside the local hospital shows that the man turned into a ‘speaking mummy’ with his tissues rotting after laying motionless for so long.

Local medics say they cannot explain how the man survived such injuries.

The story on the bear man was reported by major Russian newspaper Izvestia and news agency EADaily.

But a spokesman at the health ministry in Tyva Republic said: ‘We cannot confirm the case happened in Tuva.

‘It was not registered by the Ministry of Health, the Emergencies Ministry or any other official body (in the region).

‘Most probably, it happened somewhere outside Tuva.’

Speech on the background in the video appears not to be local language Tuvan.