Image: Finland’s Coldest-Ever Autumn Temperature Has Just Been Smashed – Snow-Depth At Its Highest Level In (At Least) 60 Years

12Z GFS forecast maps of 500 mb height anomalies show strong ridging from Alaska to the west coasts of Canada and the US both late this week (left) and early next week (right). This type of upper-level air flow will allow for the transport of these next couple of Arctic air masses from northern Canada into the central and eastern US. Maps courtesy NOAA, tropicaltidbits.com

November has started off much colder-than-normal across the nation and there won’t be any let up for the eastern 2/3rds of the nation into at least the middle part of the month. The cold start to the month follows a colder-than-normal October across the CONUS with more than twelve-hundred sites experiencing the lowest temperature ever in the month of October and, even-more impressive, many locations set their monthly record for the month as a whole. Multiple cold air outbreaks will ride along the polar jet stream during the next couple of weeks from the northern part of Canada to the Mid-Atlantic/NE US with the first one arriving in the Thursday night/Friday time frame and another next Monday. The late week cold blast will also feature rain-changing-to-snow in parts of the interior Mid-Atlantic and NE US and several inches can accumulate from western New York State to upstate Maine.

The nation as a whole was colder-than-normal during the month of October (left) and has started well below-normal in November (right). Maps courtesy Weather Bell Analytics, NOAA

Recap of the October cold

A few of the standout new monthly lows (data courtesy of NOAA, “electroverse.net”):

· Eureka, NV‘s reading of 2°F on October 30 broke the previous monthly record of 3°F set back 1971, and is now the town’s lowest-ever October temperature in 131 years of data.

· Haskell, TX surpassed its previous monthly low from way back in 1917 — the 18°F observed on the 31st is now the city’s lowest-October temperature in the record books dating back to 1893.

In terms of monthly temperature records, a few of the noteworthy highlights included Spokane, WA which suffered its coldest October-ever in the record books dating back to 1881. The National Weather Service data confirms the average temperature of 42.3°F observed last month broke the city’s all-time record of 42.8°F set way back in October 1905 (the Centennial Minimum). Also worth nothing is that three out of four of Spokane’s coldest Octobers ever (in 138 years of records) have occurred this century — including 2002 and 2009. Another example included Rapid City, SD — the NWS reports that the average temp of 38.1°F registered at Rapid City Airport was the coldest-ever for the month of October in books going back 100+ years, beating out the old record of 38.7°F from 2009.

Finally, the coldest temperature ever recorded in the continental US during the month of October was likely set in Peter Sinks, Utah. Peter Sinks is a natural sinkhole in the northern part of Utah at an elevation of around 8000 feet and is known for its highly localized effects.  Nonetheless, the unofficial overnight low temperature there of -43.6°F on 30 October was pretty amazing. Nearby Salt Lake City, Utah provided some supporting evidence of the extreme cold on that day as it set a low temperature record of 14°F for 30 October and records there go all the way back to 1874. 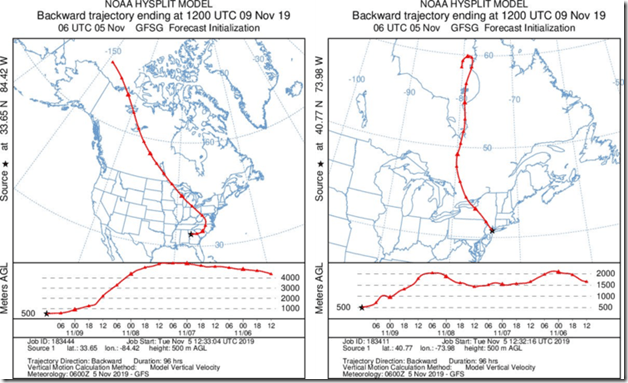 A significant cold air outbreak is headed to the Mid-Atlantic/NE US from the northern part of Canada at the end of the work week. As high pressure ridging intensifies across Alaska and western Canada, the upper-level air flow will develop in a manner which allows for the transport of air from way up in Canada to the central and eastern US. In fact, forecast maps of “backward-trajectories” ending on Saturday morning depict air movement from northern Canada into places like New York City and even into the Southeast US (Atlanta, GA). This type of upper air pattern was an important factor in the 2019-2020 “Winter Outlook” issued by Perspecta Weather in October.

As the cold air pushes to the southeast late this week, moisture will push northeast along the advancing frontal boundary zone. This should result in a rain-changing-to-snow scenario in much of the interior Mid-Atlantic and NE US with several inches of accumulating snow possible from western NY to upstate Maine by Friday morning. In addition, the Great Lakes “snow machine” will get turned on late in the week as the unusually cold air crosses over the still relatively warm waters causing instability in the lower part of the atmosphere for downstream locations. While there can be some snow shower activity in the DC-to-Philly-to-NYC corridor with the arrival of the cold air at week’s end, the bigger story in these areas will be the cold.

The colder-than-normal pattern continues for the eastern 2/3rds of the nation through mid-month with average 850 mb temperature anomalies for days 6-10 (left) and days 11-15 (right). Maps courtesy NOAA, tropicaltidbits.com

All signs point to another cold air outbreak for the central and eastern US early next week and this too can feature snow in interior sections of the Mid-Atlantic/NE US and Great Lakes. Much like the late week cold air outbreak, this next air mass will drop southeastward across Canada and then push through the Great Lakes to the eastern seaboard. Once the cold air is established, we’ll have to watch for a possible wave of energy to rotate through the upper-level trough which could result in snowfall for the Mid-Atlantic/NE US by the middle of next week. Looking even farther ahead, it appears this colder-than-normal weather pattern that began in the eastern US on the very first day of the month may very well continue for much of the month of November.

Metcalfe at one point turned off the microphone of the panel’s ranking Democrat, Rep. Greg Vitali of Delaware County. He also threatened to have a University of Pennsylvania climate researcher (Prof. lrina Marinov) sitting in the audience thrown out when she cried “not true” during testimony by a noted climate skeptic (Marc Morano).

David Masur, executive director of PennEnvironment, an advocacy organization, argued that even inviting testimony from individuals who doubt the need to reduce carbon emissions was akin to debating whether whites were the superior race, whether the Sandy Hook shootings took place or whether the world is flat. [Climate Depot note: Masur also compared climate skeptics to Holocaust Deniers during his testimony.] 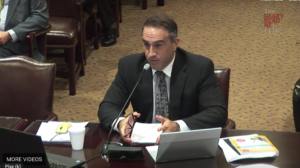 Morano comments: “This was a wild climate hearing. Invited witnesses comparing climate skeptics to Holocaust deniers, racists and there were tin foil hat protestors, legislators speaking out of turn, a warmist legislator walking out and my testimony being interrupted by my fellow testifiers at the hearing! This is the first time I have been heckled at a hearing by a fellow invited witness! Prof. Marinov, who heckled me during my testimony, was wound up and downright discourteous. Hopefully my testimony and the testimony of Kevin Dayaratna of The Heritage Foundation, Climatologist Dr. David Legates and Geologist Gregory Wrightstone, helped educate Prof. Marinov on the realities of climate change.

I want to personally thank House Environmental Resources & Energy Committee Chairman Daryl Metcalfe for the opportunity to speak. Chairman Metcalfe conducted a great hearing and would not allow the rabble rousers to take over. Kudos.” 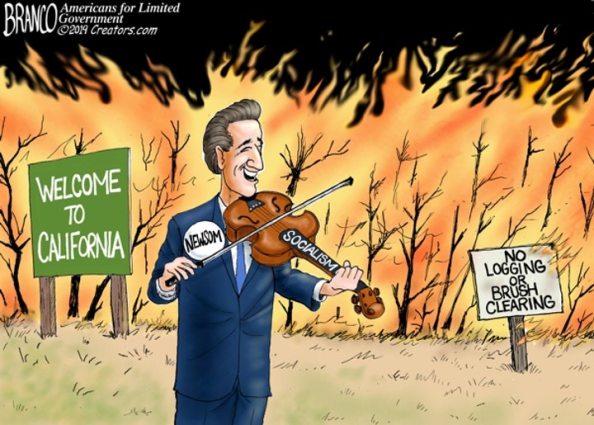