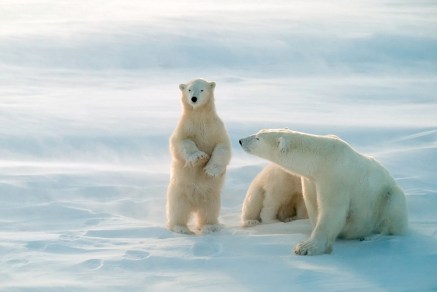 This is the third year in a row that freeze-up of Western Hudson Bay (WH) ice has come earlier than the average of November 16 as documented in the 1980s.

Reports by folks on the ground near Churchill confirm polar bears are starting to move onto the sea ice that’s developing along the shore after almost five months on land.

After five good sea ice seasons in a row for WH polar bears, this repeat of an early freeze-up means a sixth good ice season is now possible for 2019-2020.

Sadly for the tourists, however, it means the polar bear viewing season in Churchill will be ending early this year, just like it did last year and the year before.

When mothers with cubs are out on the ice (see photo above), it’s pretty certain the mass movement from land to sea ice is well underway because these family units are usually the last to leave.

Weather in Churchill was very cold today, -36C with the wind chill. The slight moderation in temperature in the forecast for the rest of this week is still very conducive to ice formation: 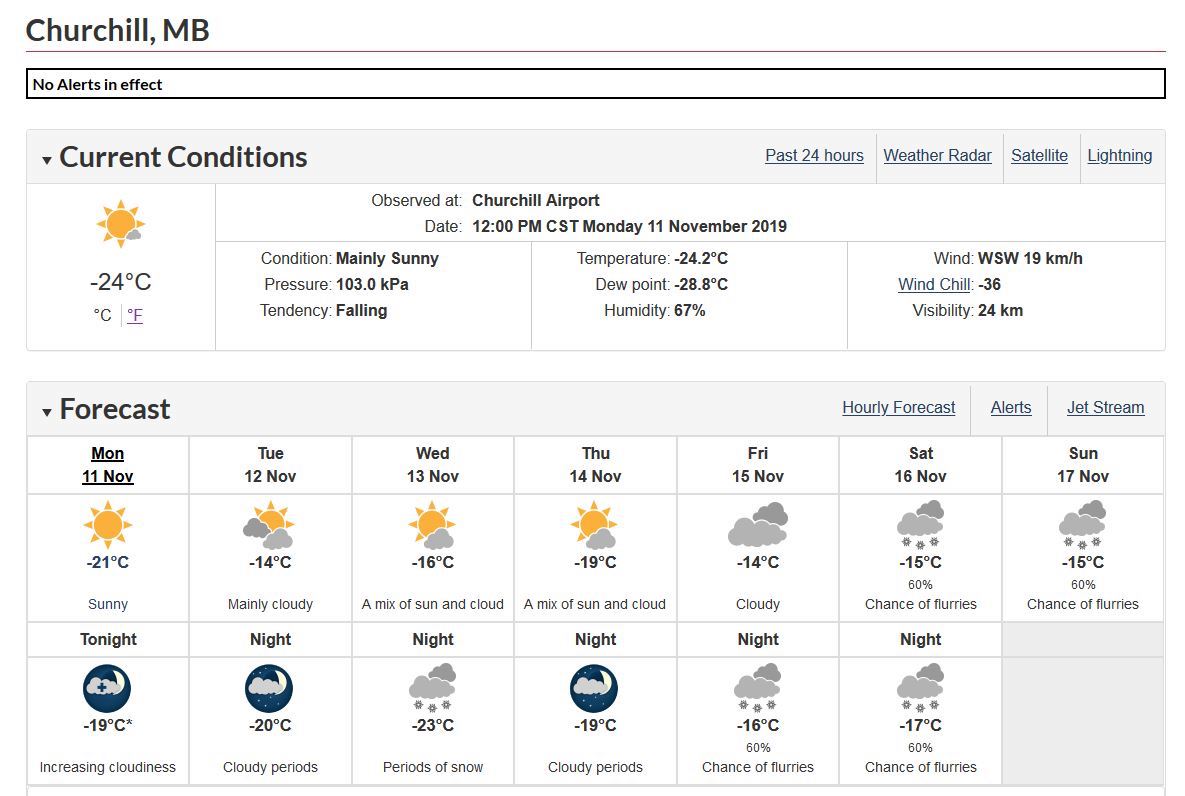 The Canadian Ice Service charts for 10 November 2018 below (the overall picture and the details for ice development in northern Hudson Bay) show the ice conditions last year at the time that bears left for the ice: 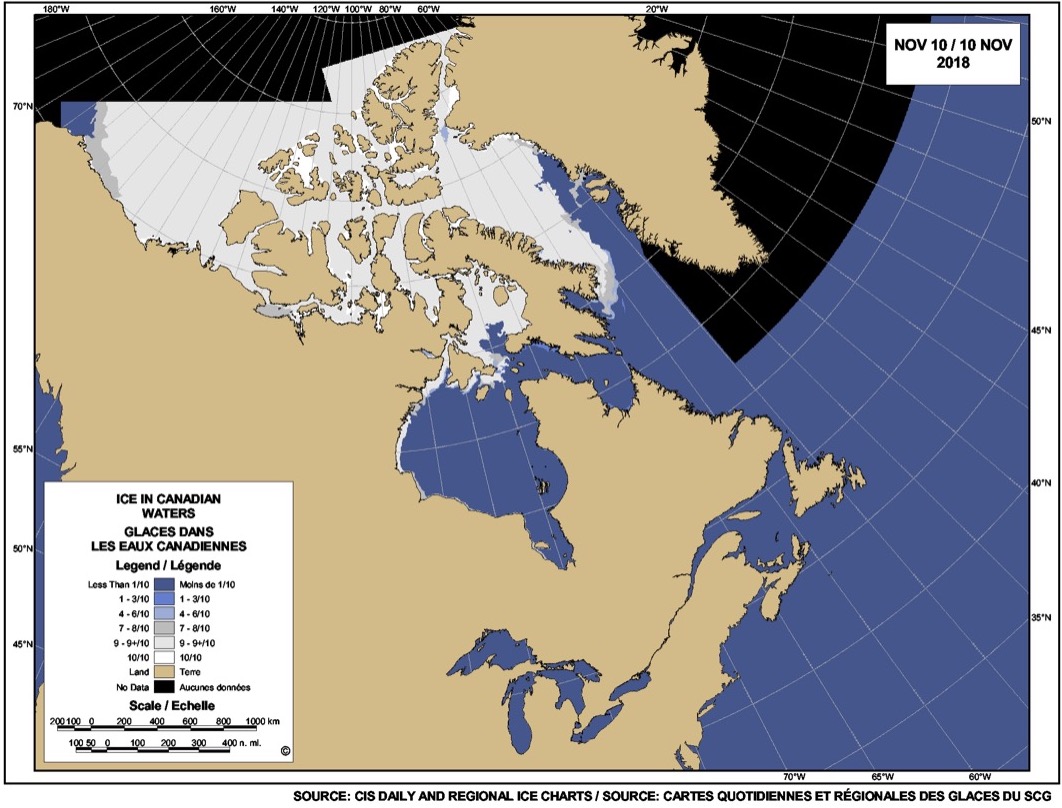 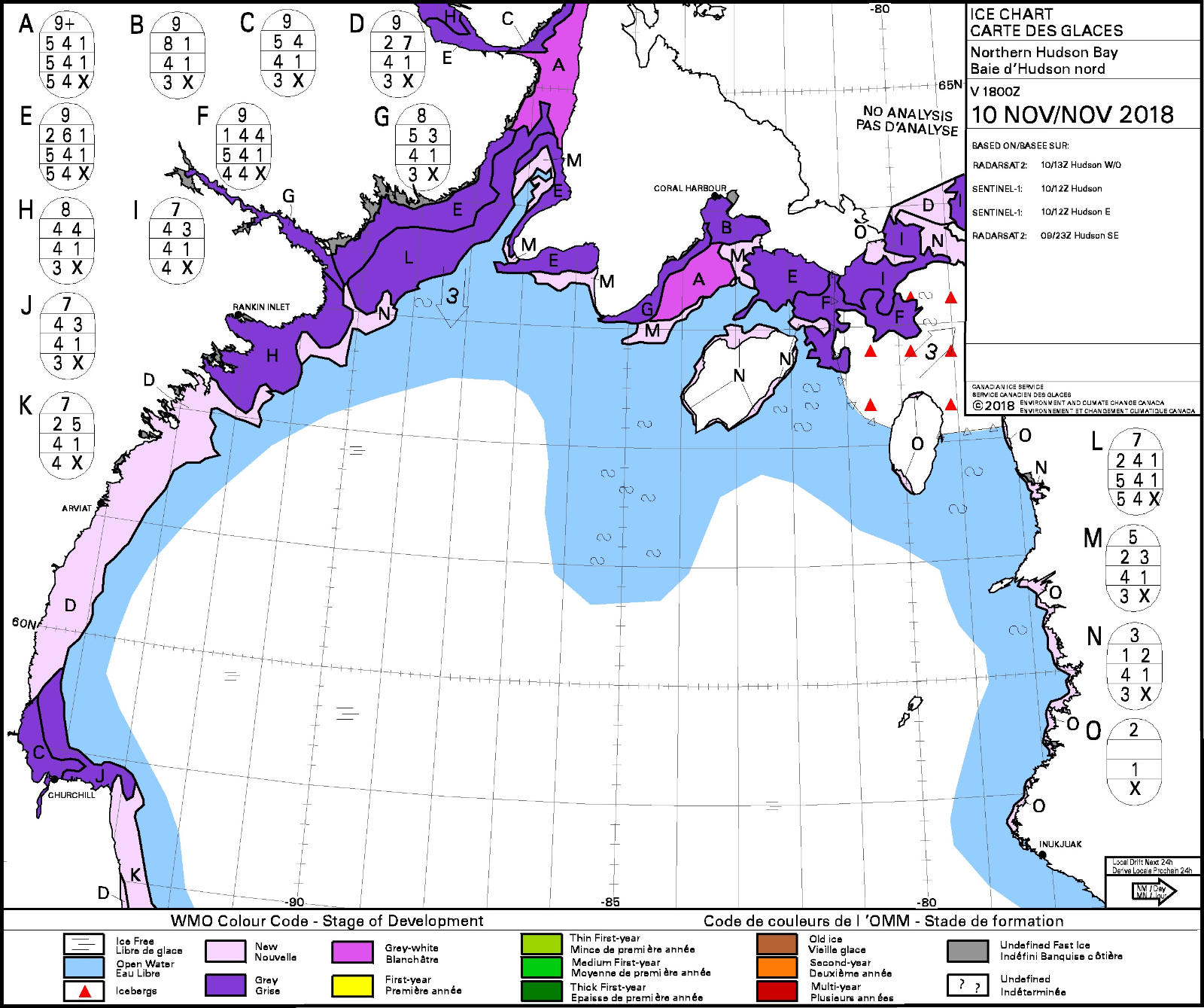 Just to round out the comparison, below is the detailed ice development chart for 11 November 2017: 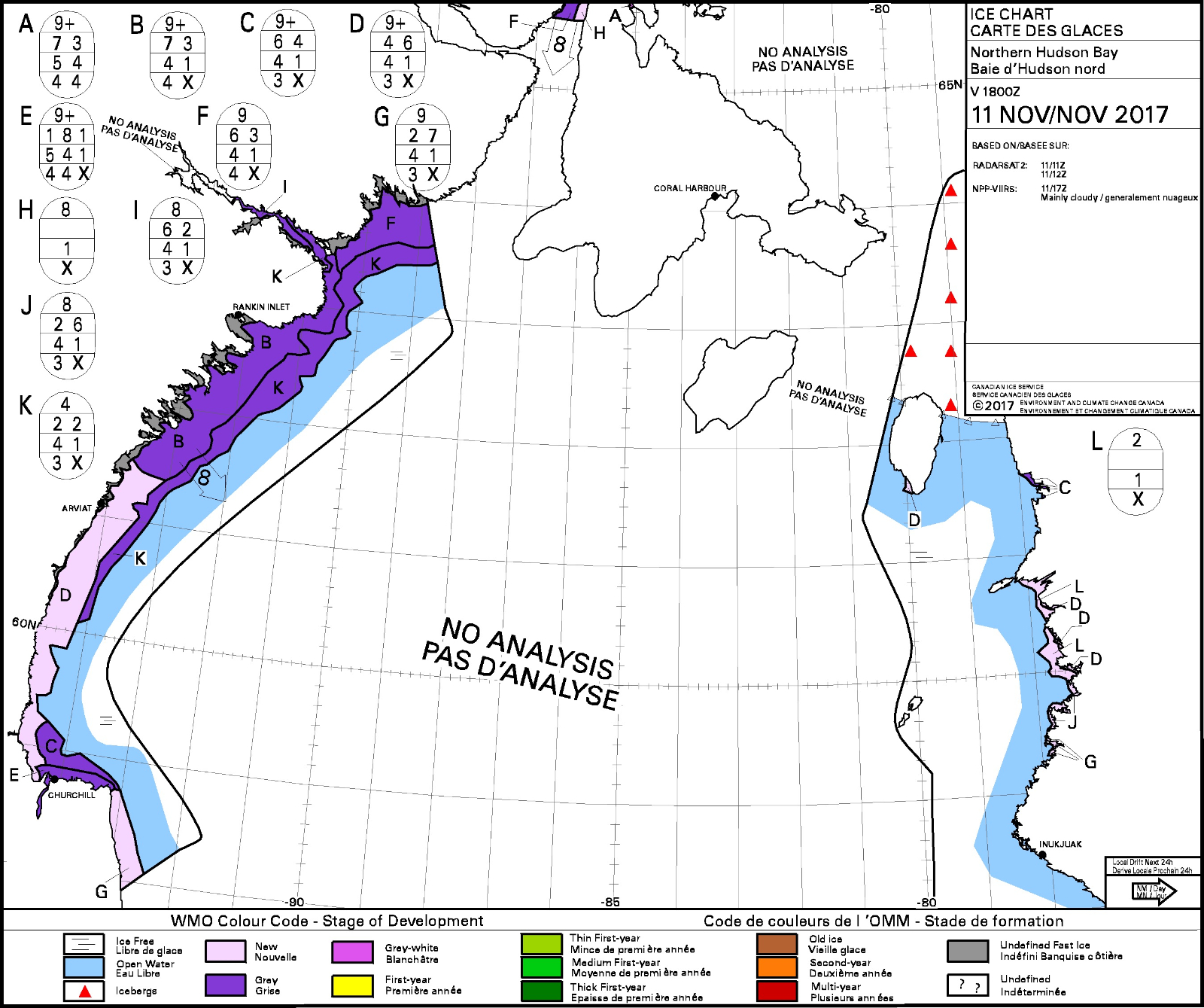 Like Andrew Derocher’s student Laura Castro de la Guardia, I am using a definition of “freeze-up” that describes the behavior of polar bears to newly formed ice, not the date when fall ice coverage on the bay reaches 50% (e.g. Lunn et al. 2016).

In other words, the relative change in the dates that WH bears left the shore between the 1980s and recent years is only about 1 week (with lots of variation). 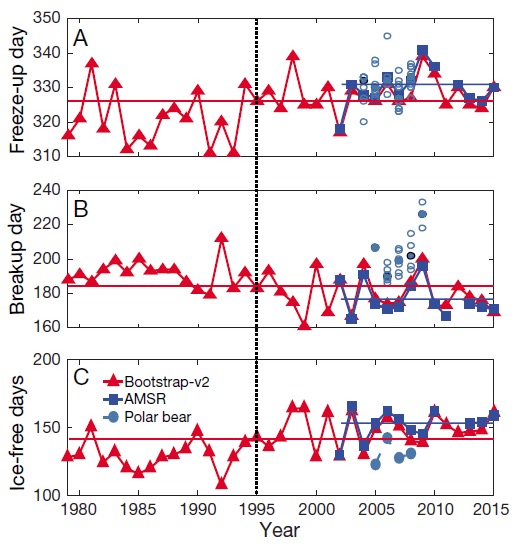 “…SH polar bears left the ice (or returned to it) when the average ice cover near the coast was about 5%. This finding is yet more evidence that the meteorological definition of “breakup” (date of 50% ice cover) used by many researchers (see discussion here) is not appropriate for describing the seasonal movements of polar bears on and off shore.”

Here is the week 19 report from the 2018 Churchill Polar Bear Alert Program (November 4-11 — almost 5 months ashore), confirming that bears were moving onto the rapidly forming ice by the first week of November last year: 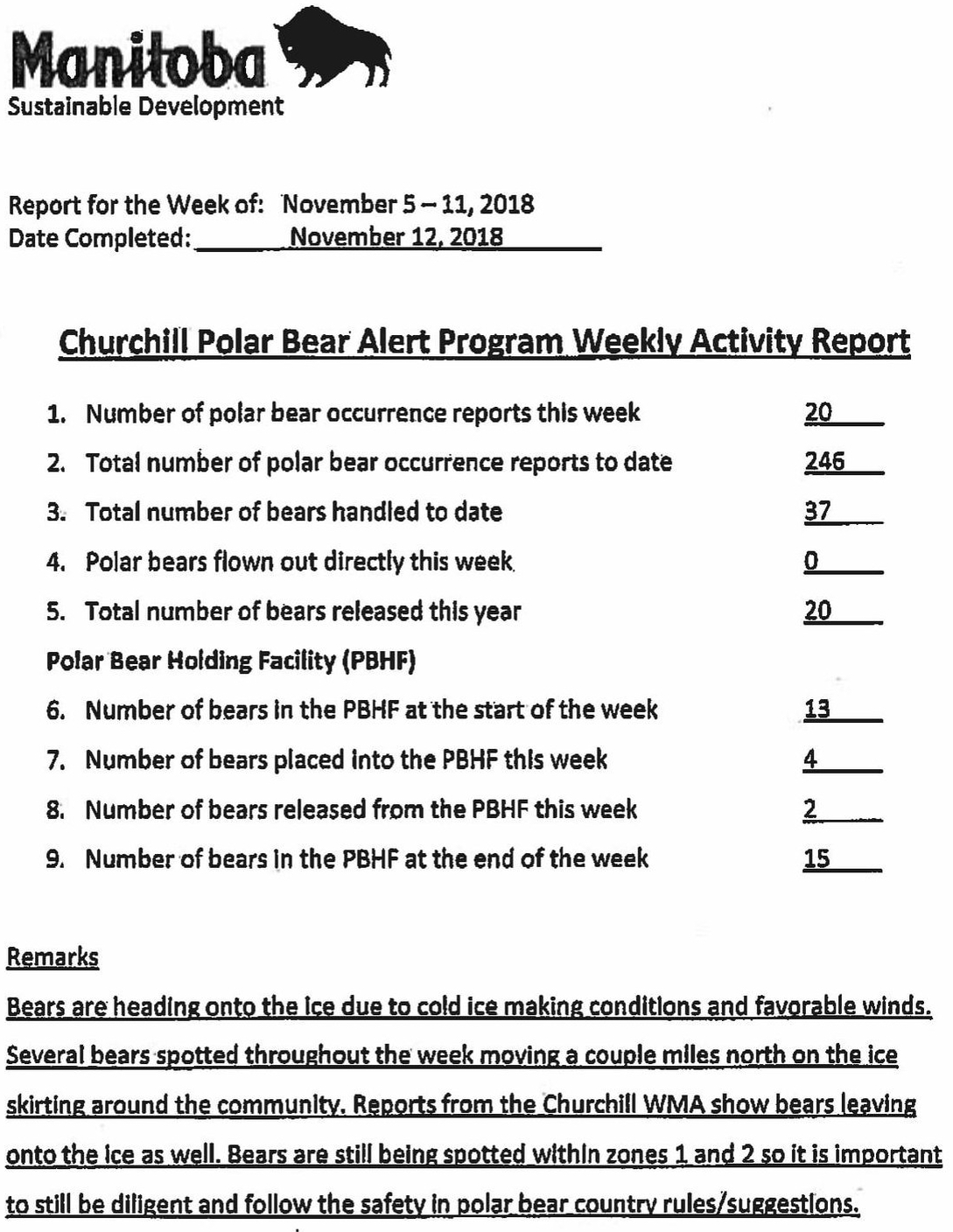 For 2019, the town of Churchill is behind in their posting of problem bear reports (the last one listed is 28 October) but I’ll insert the relevant status sheets for the season’s end here as soon as they are available.

My 2017 Southern Hudson Bay post (with its list of references) is worth another look for its discussion of the following points: the definition of freeze-up; the relationship of official freeze-up and breakup dates to the dates that the bears depart; the overall health and survival of Western and Southern Hudson Bay polar bears.

A final note: if PBI spokesperson Amstrup had been right about his predictions of Arctic sea ice and polar bear survival back in 2007 when he was the head of the US Geological Survey’s polar bear research team, there would be no polar bears at all in Hudson Bay right now (Crockford 2017, 2019), not a thriving population of fat, healthy bears moving offshore as early as bears did in the 1980s.