If there was a real climate crisis caused by burning of fossil fuels there wouldn’t be a flood of mentally ill children talking nonsense or dishonest activists in the media and all over the place spewing more nonsnese and alarmism.

There would be real data, empirical data, – presented by real scientists for all to see – and debate.

Further, a real crisis would have forced the worlds governements to come up with real solutions – not putting in place schemes to enrich themselves and their friends. R. J. L.

On November 13th, the BBC website carried an article about the flooding in Venice, quoting the Mayor Luigi Brugnaro. He said “Now the government must listen. These are the effects of climate change… the costs will be high.”

This latest flood in Venice reached 1.87 metres according to the tide monitoring centre. Only once since official records began in 1923 has the tide been higher, reaching 1.94 metres in 1966. The BBC article said ‘Photographs showed people wading through the streets as Venice was hit by a storm’.

Hit by a storm. Hang on, the mayor said it was because of climate change. Storms are natural events, so which is it?

A storm coinciding with a high tide is what it is, and they are surprised it caused a flood? In a city sinking into the ground? A city that has flooded multiple times before?

The BBC article also said it was a result of the highest tide in 50 years. Tides are a natural event, they happen every day, caused by the Moon not the climate. Unless we are now to start blaming the Moon for climate change? It’s also interesting to note that in February 2018 & 2017, after weeks of no rainfall, the canals in Venice almost ran dry. Did the BBC article mention that? No of course not.

To understand why this happened to Venice, you need to understand the city’s history and origins.

The Venice authorities have created a website called High-Water Information Centre, which has lots of information about these events. Some quotes from the webpage are:-

“Exceptional tides (when the water-line is equal to or more than 140 centimetres on the mareographic zero of “Punta della Salute”, located near the Salute Church, in front of St. Mark’s Square) statistically occur once every 5 years. They are caused by a combination of various factors, such as the astronomical tide, low pressure on the Tyrrhenian Sea, strong south wind (scirocco) and the Adriatic seiche. Further two larger phenomena also contribute to increase the water level: eustasy (see glossary below) and the subsidence of the Venetian Lagoon, which, together, have caused an altimetric loss of about 23 centimetres in the last century.”

“High waters may occur in autumn or winter seasons and are most likely to happen in November and December. But even in these months, high waters usually affect only the lowest parts of the town, such as St. Mark’s Square, whereas exceptional high tides statistically occur only once every 5 years.” (Emphasis added)

“High water is not brought to town by a swollen river, therefore it must not be confused with a flood, since it is just a natural phenomenon related to the alternation of high and low tides. In fact, water invades the town very slowly from the canals and the rising tide lasts only for some hours. Once the peak is reached (which again lasts a few hours), the water level starts decreasing again until it leaves the streets empty and wet, like after a rainfall.” (Emphasis added)

The last paragraph is perhaps the best:-

“Acqua alta” is not a dangerous phenomenon: it is important to understand that most of the time high tides cause very limited inconvenience to Venetians and tourists. In these cases, the only thing to do is to be patient and wait a few hours for the following ebb. Otherwise, a suggestion for the most curious people is to buy a pair of boots and visit the town in a quite unusual way.”

The webpage can be seen here – http://en.turismovenezia.it/Venezia/High-Water-Information-Centre-7442.html

Acqua Alta is the term used in Venice for the exceptional tides that occur periodically in the northern Adriatic. These tides reach their maximum in the Venetian Lagoon, where they cause partial flooding of Venice and Chioggia. Flooding also occurs elsewhere around the northern Adriatic, at Grado and Trieste, but less often than in Venice.

The phenomenon occurs mainly between autumn and spring, when the tides are reinforced by the prevailing seasonal winds; the scirocco, which blows northbound along the Adriatic Sea, and the bora, which has a specific local effect due to the shape and location of the Venetian lagoon.

The long and narrow rectangular shape of the Adriatic Sea is the source of an oscillating water motion called the seiche across the narrow axis of the sea.

The principal oscillation, which has a period of 21 hours and an amplitude around half a metre, supplements the natural tidal cycle, so that the Adriatic Sea has much more extreme tidal events than the rest of the Mediterranean. A secondary oscillation is also present, with an average period of 12 hours.

Because the timeframe of both oscillations is comparable to naturally occurring independent tides, the two effects overlap and reinforce each other. The combined effects are more significant at times of Full Moons. We have just had a Full Moon.

Should meteorological conditions such as a strong scirocco wind blowing north along the Adriatic basin, it hampers the natural outflow of excess tidal water, and high waters of greater magnitude can be expected in Venice.

The creation of the industrial area of Porto Marghera, which lies immediately behind Venice, amplified the effects of high waters for two reasons: first, the land upon which the area is built was created by filling large parts of the lagoon where smaller islands just above sea level previously lay. These islands, called barene, acted as natural sponges when high tides occurred, absorbing a significant portion of the excess water.

Second, a navigable channel was carved through the lagoon to allow oil tankers to reach the piers. This “Oil Channel” linked the sea to the coast, running through the harbour in Malamocco and crossing the lagoon for its entire width. This direct connection to the sea, which was obviously non-existent at the time of Venice’s foundation, has subjected the city to more severe high tides.

Porto Marghera and its facilities are not the only human-made contributors to higher tides. The municipality of Venice has published a study that suggests the following initiatives may have had an irreversible and catastrophic impact on the city’s capacity to withstand acque alte in the future:

The MOSE Project (Modulo Sperimentale Elettromeccanico) which means Experimental Electromechanical Module, has been under construction since 2003, the long time taking to complete it partly because of budget constraints, and partly because of the sheer complexity of the undertaking. The project should significantly reduce the effects of exceptional high waters by completing the installation of 79 separate 300-ton flaps hinged on the seabed between the lagoon and the Adriatic sea. While normally fully submerged and invisible, the flaps can be raised to create a temporary barrier, which is expected to protect the city from exceptional acqua alta.

Regular scientific record-keeping of lagoon water levels is considered to have begun in 1872, although some researchers suggest pushing this date to 1867, when an exceptional event (153 cm above sea level) was measured. However, because the first modern marigraph for regular tide monitoring was installed in Venice only in 1871, most documentation on the subject adopts the following year as the starting point.

The Venetian Institute for Science, Literature and Arts was appointed to the task by the newly formed Italian Kingdom, thus replacing the Magistrato alle Acque in 1866 upon annexing the city. The Institute ceased to exercise its monitoring and record-keeping functions in 1908, when the task, along with records and instruments, was passed to the Hydrographic Office of Venice.

After the unprecedented acqua alta of 1966, the city set up a dedicated service to analyse data, monitor fluctuations, and forecast high tides, which is also charged with continuously keeping the population informed. Renamed Tide Monitoring and Forecast Centre in 1980, the service has absorbed the record-keeping functions of the Hydrographic Office. 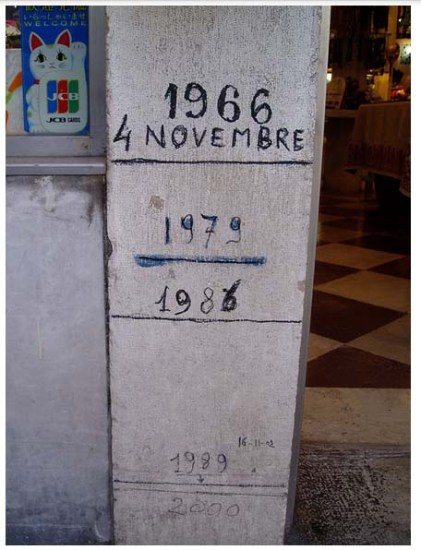 Vincenzo Chilone painted a flooded St. Mark’s Square in 1825, as seen below. 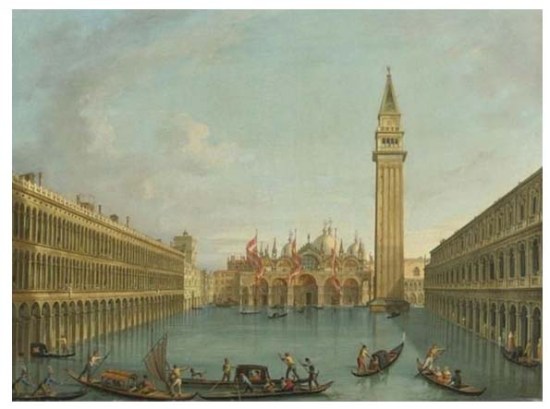 Venice is also sinking into the lagoon. Why? Because it was built on reclaimed mudflats, and the exceptional weight of monumental stone buildings later erected on insufficient foundations is causing them to sink into the mudflats, they have sunk around 23cm since 1897.

So there we have it, floods of this magnitude in Venice are a regular occurrence, around every five years or so, and the most recent one is not even exceptional, but I suppose it was inevitable someone somewhere would blame it on climate change.

It took me about an hour to find the information here, so I’m surprised the city’s mayor, who should know his city’s history well enough to not make claims like that, is seemingly unaware of it and makes statements which would inevitably be pounced on by the likes of the Biased Broadcasting Corporation. 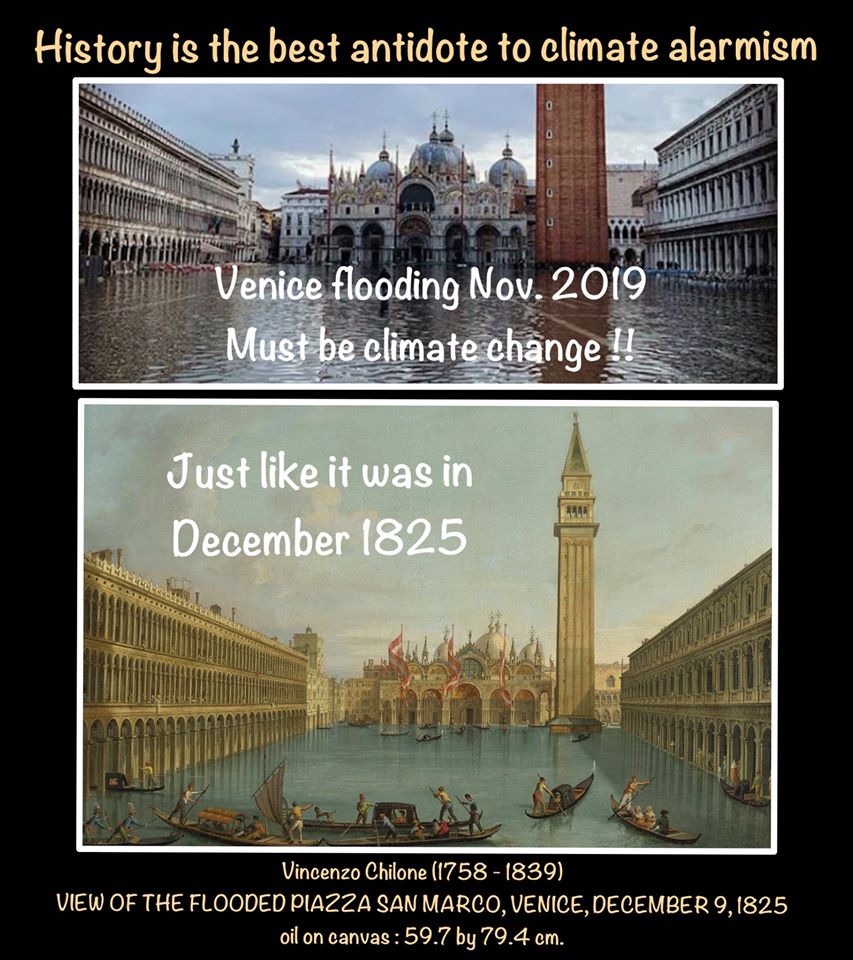