One day I will write a book, 111,111 ways our saviors have proposed to save the planet from the coming climate extinction. But here’s one you may not have considered.

At my cat-loving daughter’s house the other day I ran across one of her books. The title:

How to Tell If Your Cat Is Plotting to Kill You (by Matthew Inman). Then I saw this headline:

My first thought? “Emma must have read this book!”

But I read on. Dame Emma, we are told, who has won an OSCAR!, warned the world that the climate extinction crisis we are facing means we must expect “crop failures, water contamination, damaged houses, and ruined lives” and the prospect of eating our own pets in order to survive the coming climate apocalypse.

But don’t get your dander up about Emma. Turns out she is late to the game.

Back in 2017, the online journal journal PLoS ONE published a report on research by UCLA scientist Gregory S. Okin, entitled “Environmental impacts of food consumption by dogs and cats.” In the U.S. alone, Okin reported, 163 million dogs and cats have a detrimental impact on the environment from the food they consume to the waste they produce. 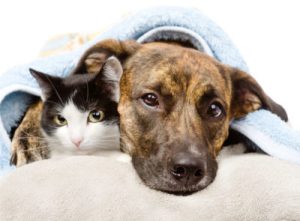 Okin found that U.S. dogs and cats “consume as much dietary energy as 62 million [human] Americans” and are responsible for 25 to 30 percent of the environmental impact of meat consumption in the U.S. If these four-footed friends were a separate country, Catdoggia would rank fifth globally in meat consumption. Getting rid of dogs and cats, Okin gushes, would be “the environmental equivalent of removing 13.6 million cars from the road.”

Some cat lovers might note that these numbers are dog-heavy and conclude that the world is going to the dogs. Sorry, Garfield.

Back in 2013, based on a 3-year U.S. Fish and Wildlife Service funded study, researchers found that previous estimates that cats kill hundreds of millions of birds a year were very low. Cats, they reported, actually kill between 1.4 billion and 3.7 billion birds annually, PLUS 6.9 billion and 20.7 billion mammals – mainly mice, shews, rabbits, and voles.

And then there is top New Zealand economist and self-styled environmentalist Gareth Morgan who created a foundation to promote his cat-killing ideas. Morgan demanded that New Zealand register and neuter ALL cats , raise the bar for cat ownership; encourage citizens to cage-trap loose cats and turn them over to the cat gestapo (er, local authorities); euthanize all unregistered cats and fine all registered owners; and require all local authorities to “dispose” of cats for free.

We understand that Morgan is the local hero of the New Zealand Mouse Union.

But even Morgan is a piker.

Writing in the German leftist Neues Deutschland (New Germany), Katharina Schwirkus argued that, “In addition to their disgusting excretions, pets are also bad for the climate — because they eat meat and thus contribute to the emission of carbon dioxide. Schwirkus says the ecological footprint of a German cat on average is as large as that of a human Egyptian.

Schwirkus insists that, “If you want to do something good for the climate, you shouldn’t buy a dog or cat. The breeding of four-legged friends should be stopped in the long term…. [T]he romantic picture of pets must finally be deconstructed. Children should be made aware from a young age that it is absolutely selfish to keep a dog or a cat in a city.”

Meanwhile, according to ethicist William Lynn [writing in The Conversation], the Australian government in 2015 declared a war on feral cats, with a goal of killing over 2 million felines by 2020 via shooting, trapping, and a reputedly “humane” poison. Lynn argued that there was no scientific basis for the government’s estimate of 20 million feral cats in Australia, thus for killing a tenth of that alleged number.

Lynn instead argues that individual animals have a moral value, and second that cats are themselves victims of human ecological errors. Lynn also questions the moral legitimacy of climate extinctionists who advocate for lethal management, which he says rests “on the assumption that individuals don’t matter – but ecosystems do. Lynn concludes by stating that, “it is human beings [not cats] who bear direct moral responsibility for the ongoing loss of biodiversity in our world.”

It is also human beings – not cats – who are spreading irrational fear about a coming climate extinction crisis and producing massive volumes telling everyone else what THEY must do to save the planet while flitting about in private jets to five-star resorts to bemoan just about everything that has brought joy to the world.

Down The Rabbit Hole

Climate alarmists are starting to make the Mad Hatter look like a sane person.

Eat Less Meat And Save A Glacier

The one flaw that wipes out the crisis