If you really believe the environmental, liberal leftist propaganda that increases in atmospheric carbon dioxide can create enough excess carbonic acid in the oceans for there pH to drop below 7 (I will explain later) I have a bridge in Brooklyn you may be interested in buying.

Ocean acidification, is a recent hobgoblin being advanced to maintain the fear of the continual use of fossil fuels that emit carbon dioxide into the atmosphere, ultimately to be absorbed into the oceans and increase its acidity. It is a good fall back position if the planet is not warming enough to maintain the public in a state of fear. After all an acidic ocean would surely lead to the end of of all hard shelled animals in the sea, as their calcium carbonate shells could no longer form, and those already in existence would slowly dissolve.

I will shortly prove this to be quite incorrect, but a small academic industry has popped up developing research projects to prove that it is time to be worried, very very worried. Gregory Wrightstone, says in his new book of INCONVENIENT FACTS “fund it and they will find it”. 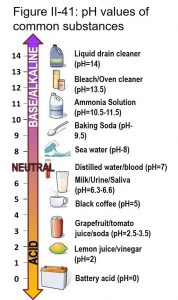 So back to the beginning, what is ocean acidification.

To understand that, you most first know that all liquids are usually acidic or basic with a small number being neutral, such as distilled water. To determine this we measure each liquids pH which is a symbol describing the proportion of hydrogen ions in the solution as compared to neutral distilled water. It is a logarithmic scale that goes from zero, which would be the most acidic, to 14 which is the most basic. In a logarithmic scale each higher whole number represents something ten times greater than the previous whole number. Okay I am losing some of you but the diagram to the left will give sense to it all.

In fact the sea creatures that make their shells or exoskeletons out of calcium carbonate are already used to large swings in pH on the continental shelves near the mouths of rivers, particularly during floods. The rivers that flow into the bays and estuaries are often significantly acidified. Yet oyster communities thrive in these areas. It is also believed that 2 billion years ago our oceans may have been acidic.

The pH of the ocean varies slightly depending on the season, water depth and latitude. The pH level trends slightly less alkaline in the tropics, during the winter and at depth. Since the industrial revolution, and its increase in carbon dioxide emissions, the pH may have declined by one tenth of a ph whole number. It is certainly possible that during this century the pH could decline another one tenth of a whole number leaving the oceans still very alkaline or basic. Remember, in a logarithmic scale a whole number means ten times more than the next lower number.

Recognizing there is little chance of large changes in pH the alarmists are now claiming small changes in whole numbers will still have major impacts. Past records do not support this. More sensible research using chemical models show that, in fact, the ocean pH would have to drop all the way to 6.0 for the shells of existing sea animals to begin dissolving. Even the most dramatic alarmists do not project ocean pH dropping that much .

The best research supporting a lack of concern over our oceans is done in chemical laboratories. Even there they can not easily duplicate the buffering action of the the limestone and other minerals in the ocean which further restrict any increase on the impact of carbonic acid in the ocean.

Under modern conditions, the oceans can not become acidic, and no where near as acidic as the rainwater that falls upon them daily. Climate extremists do not talk of slight decreases in alkalinity, as that will not strike fear into the hearts of the public. The very term ocean acidification conveys the notion of a looming catastrophe. On this basis they have a weapon to increase the costs of energy by opposing fossil fuel and supporting the subsidization of wind and solar energy,

The long term geologic history reveals some very inconvenient facts for the climate alarmists spreading fear that acidic oceans will dissolve sea shells. Data from the early climate provide no basis for any such fear. In 2009, a team of oceanographers lead by Y. Liu and W. Liu, examined corals in the South China Sea and reconstructed the pH History for the last 7000 years. Below is the chart comparing their findings to the carbon dioxide content taken from the Vostok ice core over those same years in Antarctica. 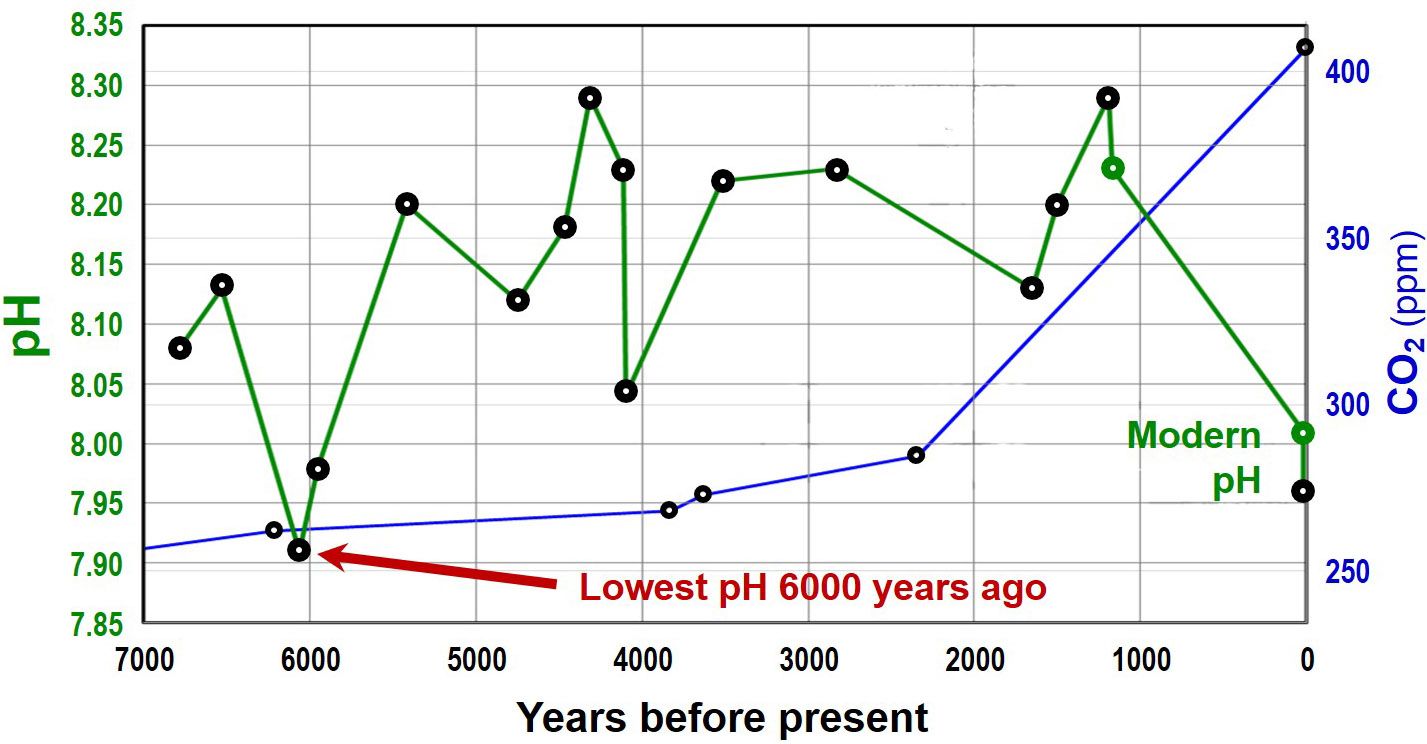 It is apparent that the current pH values and the rate of decrease are neither unprecedented nor unusual. In fact, the lowest measured alkalinity was about 6000 years ago when CO2 levels were one third today’s levels. An acidified ocean is just one more thing to tell your friends not to worry about.