Image: You may recall that Buffet has been candid with his investors as to why he invests in so-called “renewables.” Here’s what he infamously said about wind turbines: “For example, on wind energy, we get a tax credit if we build a lot of wind farms. That’s the only reason to build them. They don’t make sense without the tax credit.”

Silly Jilly sums up everything that is wrong with the Green Recovery Agenda: 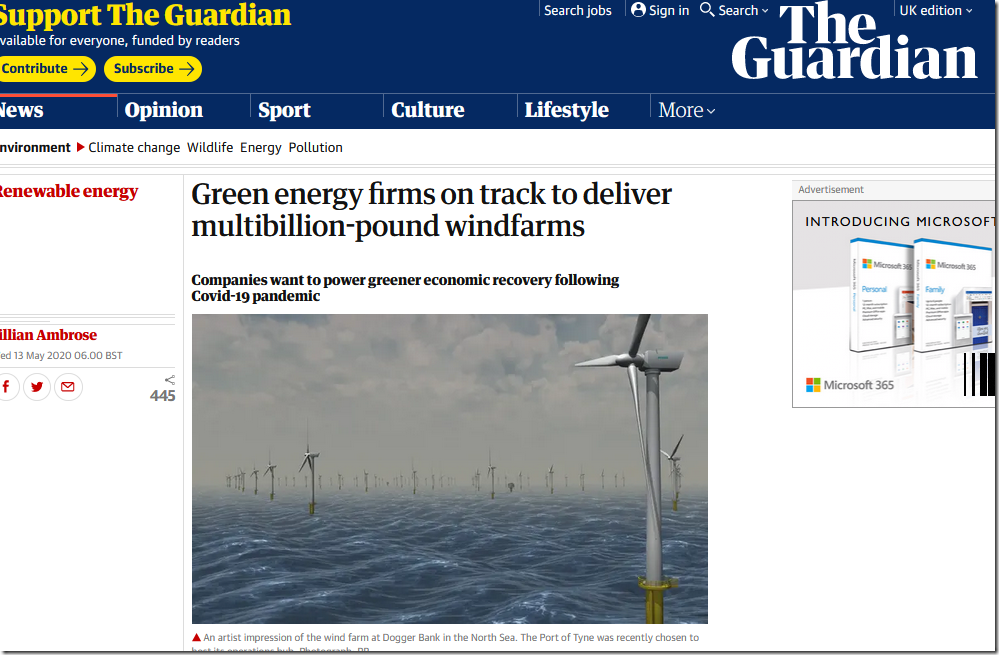 Britain’s biggest green energy companies are on track to deliver multibillion-pound windfarm investments across the north-east of England and Scotland to help power a cleaner economic recovery.

The windfarm cluster is expected to create 600 jobs at its peak, and 280 long-term jobs, to help the UK emerge from the worst economic downturn in 300 years while taking steps to meet its climate goals.

Separately SSE and Equinor have revealed plans to use the Port of Tyne to host the operations base for the world’s largest offshore wind development, which will create 200 permanent jobs and support a local supply chain industry based on clean energy.

Alok Sharma, the secretary of state for business, said projects like the Dogger Bank offshore windfarm will be “a key part of ensuring a green and resilient economic recovery as well as reaching our target of net-zero emissions by 2050”.

“Renewable energy is one of the UK’s great success stories, providing over a third of our electricity and thousands of jobs,” he said.

The project is part of the company’s plan to develop 1,000MW of onshore wind power and battery storage after the government’s u-turn on support for onshore wind, but could also play a role in resuscitating the UK economy following the coronavirus pandemic, he said.

“We’re kickstarting as many of our projects as we can so they are ready to help boost the economy when the pandemic ends. Not only do these projects help funnel money back through the supply chain and into jobs but they also make sure that the economic recovery is based on sustainable investments,” he said.

Ignacio Galán, the chairman and chief executive of Iberdrola, which owns Scottish Power, said it is essential the financial recovery is aligned with climate goals. “As we begin to emerge from the coronavirus crisis, investment in green infrastructure can quickly be delivered, creating jobs and offering immediate economic and environmental benefits. This will help to support the UK’s overall recovery at this critical time,” he said.

In the north-east, the £9bn Dogger Bank offshore wind development is on track to bring investment to the UK “at a challenging time for us all”, according to Stephen Bull, the head of Equinor’s UK business, which runs the site. Equinor and SSE Renewables picked the Port of Tyne to host the operations hub through a competitive tendering process, following its £10m overhaul to prepare for a surge in demand from windfarm developers.

“The north-east has a strong industrial heritage and a supply area that stretches north and south of the River Tyne,” said Bull. “The Port of Tyne is clearly well set up to attract other clean energy investment which we hope will complement our activities.”

Matt Beeton, the Port of Tyne’s chief executive, said the project is “extremely important for the wider region” in terms of spurring economic benefits for the local supply chain and creating employment opportunities. “This announcement is a huge step towards developing a cleaner future for the Port, the region and for industry in the north-east,” he said.

Let’s take Dogger Bank as an example. It is costing £9bn, and for what?

We get a project which simply replicates what we already have, which also happens to be more efficient and cheaper. As with all of these make work proposals, somebody has to foot the bill, thus taking money out of the rest of the economy.

Worse still, how much of that £9bn goes offshore? There have long been complaints that the promised gold rush of green jobs has failed to materialise from wind power development  with much of  the work going abroad.

If we have got £9bn going spare, surely there are many more productive and valuable projects it could be spent on?

But what about claims that wind power is now cheaper than the current market price? Jilly herself claimed this a few months ago, when she stated that Dogger Bank would cost around £40/MWh. Unfortunately numbers are not Jilly’s strong point!

In fact the current pricing is between £45.83/MWh for Phase I, and £48.09/MWh for Phase II and III. This will be index linked for every year until the end of the contract.

However current wholesale prices are £21/MWh. Even prior to the lockdown, prices have been averaging around £30/MWh: 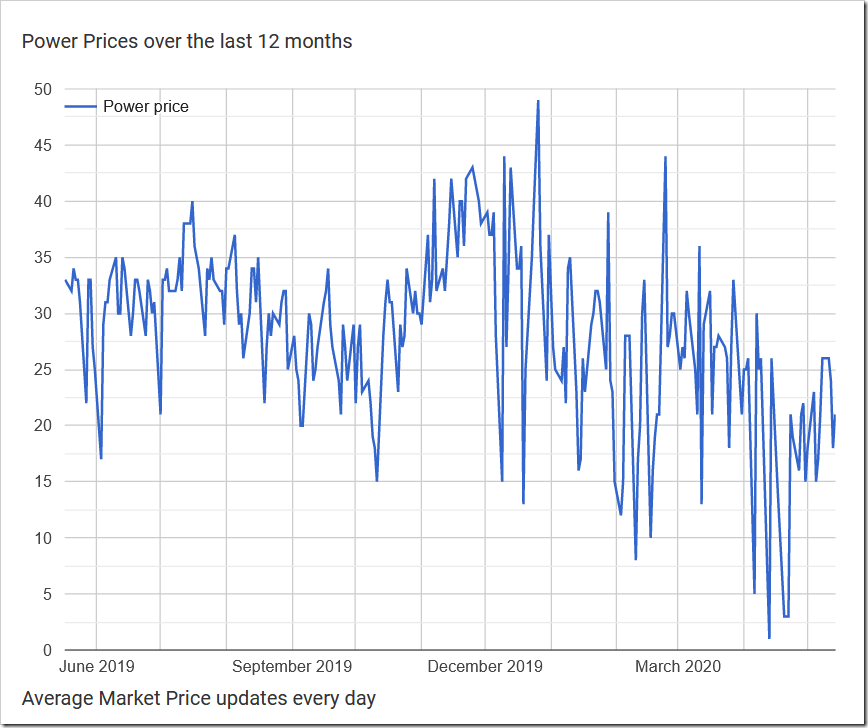 Nobody has a clue what future prices will look like, but given the surplus of oil and gas at the moment, it is inevitable that power prices will remain depressed for a long time to come.

There is also a question mark as to whether Dogger Bank can really supply power at £48/MWh. John Constable has investigated this in the past, and concluded that the costs simply don’t stack up.

My analysis comes to the same conclusion. The government did a lot of work on levelised costs of generation in 2016, in conjunction with expert consultants. They found that typical construction costs were £2420/KW, at 2015 prices. Dogger Bank is rated at 3.6GW, which equates to a total cost of £8.7bn. On top of that comes another £323m of infrastructure costs.

Dogger Bank is reckoned to be costing £9bn, which seems to confirm the government assumptions. Based on this, and an ultra low discount rate of 3.5% (as used in the HM Treasury Green Book), levelised costs work out at £73/MWh.

So how can SSE make a profit at £48/MWh? According to the government costings, Operations & Maintenance will cost £27/MWh alone.

The costs simply don’t stack up.

According to Constable, one possibility is that SSE and others are banking on the market price of electricity rising sharply by the time their new wind farms are commissioned. If this happens, they can simply pull out of their CfD agreements (at a small penalty), and enjoy much greater returns in the market. The prospect of higher market prices is, of course, enhanced by the introduction of much higher carbon prices and closure of cheaper conventional plants.

Given the plunge in the price of fossil fuels, there may now be some very worried faces at SSE.

There is, however, an alternative scenario. Envisage a scenario in ten years time, when the UK is ultra reliant on wind power. Imagine an era of low power prices and struggling renewable generators, at danger of going bankrupt. The government would probably have to offer some sort of subsidy, to stop the lights going out, or at least to safeguard their climate targets.

Maybe a direct subsidy, funded by a surcharge on bills – perhaps similar to the Renewable Obligation scheme. Maybe even higher carbon taxes, or maybe a legal requirement for businesses and public sector bodies to buy direct from renewable operators via Power Purchase Agreements.

RSPB flooded with reports of birds of prey being killed

Start Me Up: Cheap & Reliable Coal-Fired Power Only Path to Economic Recovery