Image: Scientists Discover The South Pole Is Warming 3x Faster Than The Rest of The Planet

Related: Alarmism Exposed: The entire world is warming faster than the entire planet 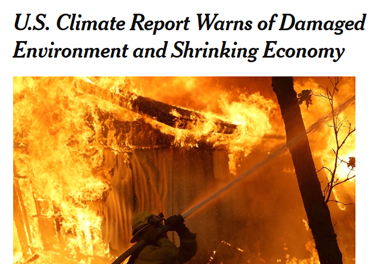 But in recent years, something sneaky and unethical has occurred. Officials have begun talking about the worst case climate scenario is if it were our likely future.

More than a decade ago, the Intergovernmental Panel on Climate Change developed four fairy tales to describe how humans might impact the climate by the year 2100. There was an optimistic scenario, two mid-range scenarios, and a pessimistic scenario.

The latter is known as RCP8.5 (I think of it as Ridiculous Climate Prophecy 8 dot 5).

In January, Zeke Hausfather and Glenn Peters published a comment in Nature reminding everyone that RCP8.5 isn’t a realistic vision of the future. It represents an unlikely, high-risk, dystopian world (their words) in which “the dice are loaded with the worst outcomes.”

It can’t become reality, they point out, unless humanity burns five times more coal than we currently do, “an amount larger than some estimates of recoverable coal reserves.” Whenever RCP8.5 gets mentioned, they say, it should be clearly labelled as an “unlikely worst case.”

Their plea is unmistakable:

We must all – from physical scientists and climate-impact modellers to communicators and policymakers – stop presenting the worst-case scenario as the most likely one. [bold added]

US climate analyst Roger Pielke Jr. has similarly written a trio of articles that document how RCP8.5 “moved from an extreme outlier to the center of climate policy discussions,” corrupting great swaths of the scientific literature along the way (see here, here, and here). He, too, calls the RCP8.5 vision of the future imaginary and impossible.

Canadian economist Ross McKitrick is also ringing the alarm bell. RCP8.5, he says, is “a scorcher that predicts historically unprecedented increases in global CO2 emissions.” Using words such as implausible, improbable, exaggerated, and distortion, he makes it clear the only place this vision of the future exists is in fevered imaginations.

“No one seriously believes,” he says, that the increase of coal consumption described by RCP8.5 “is even possible.”

Even journalists who’ve hyped the climate threat are wising up. In an article titled We’re Getting a Clearer Picture of the Climate Future – and It’s Not as Bad as It Once Looked, David Wallace-Wells reports that most experts he’s interviewed “told me that they did not see RCP8.5 as a plausible scenario.”

By the year 2100, remember, teenager Greta Thunberg will be 97 years old. Wallace-Wells observes that any attempt to predict what the world will be like that far into the future is really just “a foolish game.” In his words:

Projecting what global energy use will be in the year 2100 is the equivalent of trusting projections made in 1940 about where we are today.

Yet that is what much of climate ‘science’ – and climate ‘journalism’ – now amounts to. In 2018, the front page of the New York Times announced: U.S. Climate Report Warns of Damaged Environment and Shrinking Economy. It began this way:

A major scientific report issued by 13 federal agencies on Friday presents the starkest warnings to date of the consequences of climate change for the United States, predicting that if significant steps are not taken to rein in global warming, the damage will knock as much as 10 percent off the size of the American economy by century’s end. [bold added]

Incredibly, that ‘major scientific report’ takes RCP8.5 seriously. Calling it a “core scenario,” page 6 of the report presents it as a realistic possibility rather than a farfetched hallucination:

This means the report is junk. No matter how many federal agencies were involved in its creation. But the Times didn’t tell readers that.

When a “Green” Rent & Grant Seeking Activist want to earn money also on his way out of the Climate SCAM: 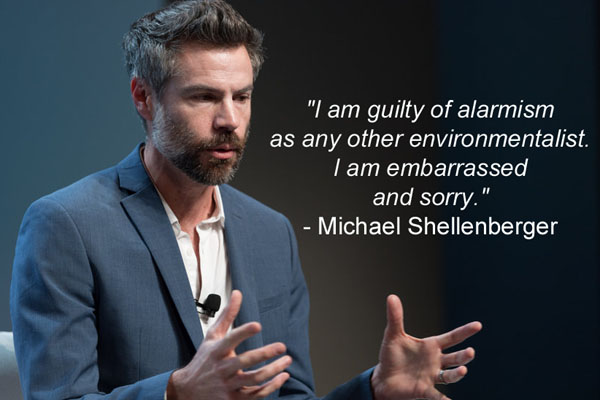 – Humans are not causing a “sixth mass extinction”
– The Amazon is not “the lungs of the world”
– Climate change is not making natural disasters worse
– Fires have declined 25% around the world since 2003
– The amount of land we use for meat humankind’s biggest use of land
has declined by an area nearly as large as Alaska
– The build-up of wood fuel and more houses near forests, not climate
change, explain why there are more, and more dangerous, fires in
Australia and California
– Carbon emissions have been declining in rich nations for decades and
peaked in Britain, Germany and France in the mid-seventies
– Adapting to life below sea level made the Netherlands rich not poor
– We produce 25% more food than we need and food surpluses will
continue to rise as the world gets hotter
– Habitat loss and the direct killing of wild animals are bigger threats to
species than climate change
– Wood fuel is far worse for people and wildlife than fossil fuels
– Preventing future pandemics requires more not less “industrial”
agriculture

Climate alarmism versus integrity at National Academies of Science