Image: Climate dogma is worse than you think

Science is about the search for knowledge and understanding. It is understood that there will never be “a” correct answer in science, just a continuing journey. Richard Feynman, the noted physicist, said that science is the belief that the experts are wrong.

Theories are developed and tested against existing beliefs to determine the validity of these hypothesizes. Karl Popper, the science philosopher, stated that a valid theory must be falsifiable or be able to be proven wrong because no theory can ever be proven right.

[PSI Editor’s note: this is a revised and updated version of the article: The Kinetic Energy Of Air Molecules & Altitude (May 18, 2020)]

The testing of theories is done with experimentation and observation to see how they conform to reality and current theories. If evidence is discovered that cast doubt on a theory both the theory and the evidence must be examined to determine where the error lies.

Theories are just guesses trying to explain reality while evidence is done with instruments with limitations that can produce errors and both can produce a wrong understanding of reality.

In physics the behavior of energy follows the laws (theories) of thermodynamics first postulated by Keppler. The first law of thermodynamics: Energy cannot be created or destroyed, is an act of faith derived from our observations and could well be wrong.

Energy could be created or destroyed at a level too small for us to detect or too large for us to comprehend but there needs to be a founding belief against which new theories are tested and until the conservation of energy is shown to be false we accept it as true.

Energy cannot be destroyed but it does change as it decreases as a function of distance from its source and also decreases as energy is transferred to an object with less energy.

The second law of thermodynamics: Energy flows from higher energy levels to lower energy levels, deals with how energy behaves. This does not mean that the flow of energy cannot be changed and we can’t take heat from a cooler room and transfer it to a hotter room (air conditioning) but in order to reverse the natural flow we must add energy, in the form of work, to change the natural flow of energy.

These are the fundamental laws of physics that govern the movement of energy and climate on the Earth. The sun is the source of our energy and the Earth equalizes with it, gaining energy by absorbing energy during the day and losing energy by radiating energy at night.

Observation shows that the gases, nitrogen, oxygen, and argon, which make up ninety nine point nine percent of the atmosphere, do not absorb the visible wavelengths and longer wavelengths of the electromagnetic spectrum but these wavelengths are absorbed by the liquids and solids of the Earth.

The gases in the atmosphere are gaining energy from the sun just not from the visible spectrum. The gas molecules, just like other objects, will equalize energy with that coming from the sun, reaching a point where they emit as much energy as they receive.

The density of gases at an altitude of eighty kilometers is .000018 kilograms per cubic meter. These molecules will absorb energy coming from the sun and radiate it in all directions equalizing with the energy absorbed and reducing the amount of energy from the sun continuing to travel to the Earth’s surface.

The density of the atmospheric gases at sea level is 1.2 kilograms per cubic meter. If this amount of matter were to absorb the same amount of energy that is present at the eighty kilometers and equalize with it, it would mean that the molecules at eighty kilometers would have sixty seven thousand times the kinetic energy as the molecules at sea level.

The visible and infrared light emitted by the sun comes from the surface of the sun and does not vary significantly during the sunspot cycle. The x-rays and ultraviolet light are produced by solar flares and vary greatly during the cycle. It is the loss of heat from the atmosphere that causes cooler conditions on Earth when sun spots disappear.

The contention that the thermometer measures the mean kinetic energy of medium being tested is false in a gas. As kinetic energy is added to an unconfined gas (like the atmosphere) it expands and fewer molecules transfer energy to the thermometer. The instrument has no way to determine if the energy it receives comes from many molecules (more mass) with little energy or few molecules (less mass) with greater energy. 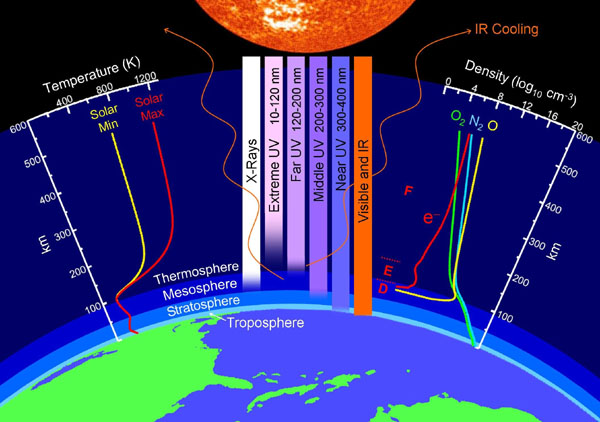 In order to compare the kinetic energy at different altitudes it is necessary to use the universal gas law, PV=nrt. (Note: P does not stand for atmospheric pressure (weight of the gas molecules) but the pressure that confines the atmosphere and resists its expansion, gravity.

Since gravity is measured from the center of the Earth its pressure does not change significantly in the atmosphere and be considered constant.) When energy (t) is added to an unconfined gas it will expand.  This means that the kinetic energy of the gas molecules is proportional to the volume of a constant number of molecules (inverse of density).

When these figures are plotted on a graph they show that the kinetic energy of the gas molecules in the atmosphere increase slowly through the troposphere (where water absorbs energy moderating the increase) then increase exponentially with increasing altitude.

It is the sun that is the source of energy for the Earth and it and the position of the Earth are what determine our climate. Man cannot affect the Earth’s climate globally. It is a result of the equalization of energy between the Earth and the sun.

Presently the sun is entering a Grand Solar Minimum where sun spot activity is greatly reduced. The atmosphere will no longer be adding as much energy to the Earth. The last time this occurred it was known as the little ice age and brought years without a summer and starvation from reduced food production.

Instead of wasting money on expensive unreliable energy production (solar and wind) to mitigate a nonexistent threat, the world needs to prepare reliable safe source of energy (nuclear) so it can deal with the consequences of less energy coming from the sun.