It’s the end of civilization. Again.

Eco-extremists in the liberal media can’t even give themselves a 10-year gap for their end-of-the-world predictions.

The latest Time magazine cover declared that 2020 is our last, best chance to save the planet. Run for your lives!

Time announced the new cover on Twitter. The cover article was written by Justin Worland, the same author who co-wrote the “TIME 2019 Person of the Year: Greta Thunberg.” That piece claimed climate activist Thunberg was a “a pool of resolve at the center of swirling chaos.” [Emphasis added.]

2020 looks like the year when an unknown virus spun out of control, killed hundreds of thousands and altered the way we live day to day. In the future, we may look back at 2020 as the year we decided to keep driving off the climate cliff–or to take the last exit, [emphasis added.] 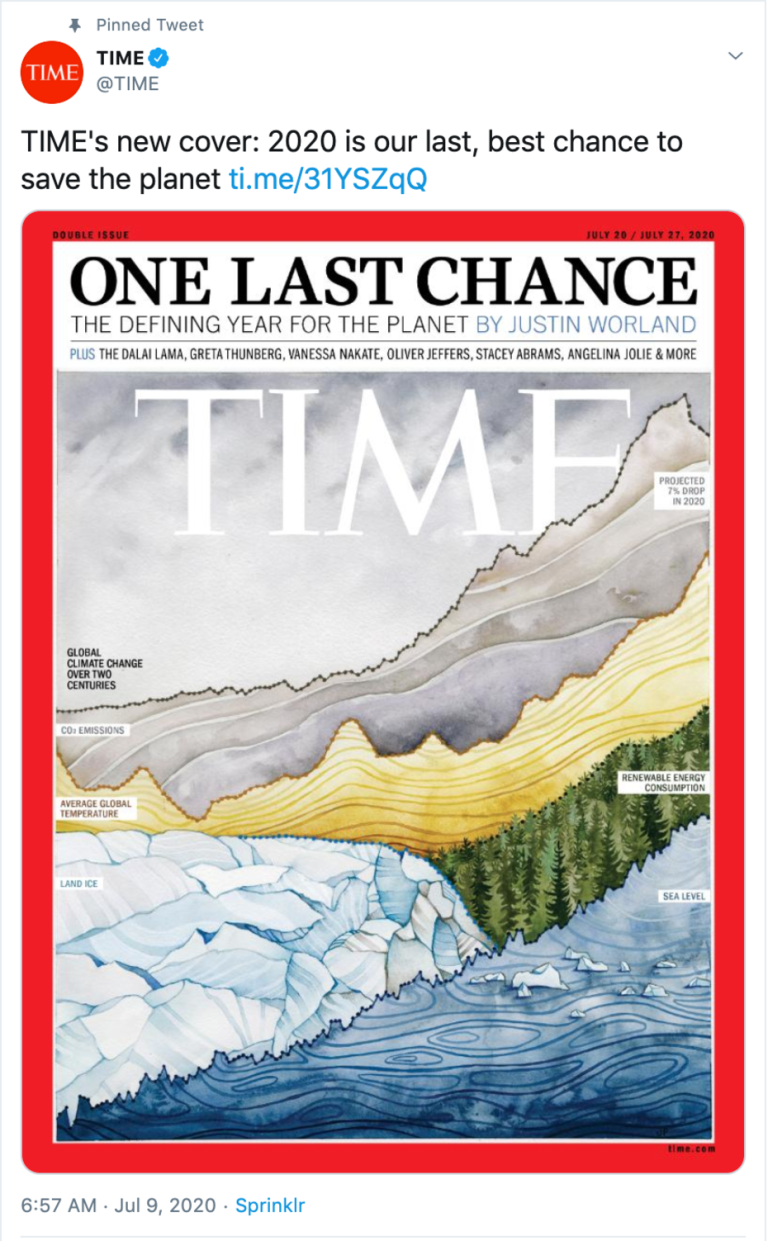 Worland also quipped how for the past three years, “the world outside the U.S. has largely tried to ignore Trump’s retrograde position on climate, hoping 2020 would usher in a new President with a new position, re-enabling the cooperation between nations needed to prevent the worst ravages of climate change.”  But, “there’s no more time to wait,” Worland fretted. [Emphasis added.]

Still, Worland was sure to advocate on behalf of a Joe Biden presidency: “[T]he future of U.S. emissions will likely fall to the winner in the fall. Joe Biden, the former Vice President and presumptive Democratic presidential nominee, is well aware of the role the pandemic recovery will play in shaping emissions.”

Worland even blamed the U.S. for the alleged “climate catastrophe” he says we’re facing. He wrote that “We find ourselves on the brink of climate catastrophe in large part because of the decisions made during a past crisis. As the world came out of the Great Depression and World War II, the U.S. launched a rapid bid to remake the global economy–running on fossil fuels.” [Emphasis added.]

Sounds remarkably close to when Time magazine whined in 1992: “Nature has a cure for everything, except the spread of Western civilization.”

Stoking fears about the world rising past 2℃, “where the effects of climate change go from advancing gradually to changing dramatically overnight, reshaping the planet,” Worland said “we need to cut emissions in half by 2030.” [Emphasis added.]

Worland wrote that “[t]o achieve a 1.5°C goal without creating mass disruption has always meant thoughtfully restructuring the global economy, moving it away from fossil-fuel extraction slowly but surely. Scientists and economists agree this is the last opportunity we have to do so.” [Emphasis added.]

Worland’s latest edition to Time’s eco-extremism is just as loopy as when Time contributor Eugene Linden suggested in 2000 that the threat of climate change was greater than USSR nuclear missiles. Or how about when Time magazine’s editors warned in its 1989 “Planet of the Year” issue that “[u]nless the growth in the world population is slowed, it will be impossible to make serious progression on any environmental issue.”

Al Gore’s “Carbon Free” Is About Controlling The Private Sector