Scientists have discovered a massive detached coral reef in Australia’s Great Barrier Reef – the first to be discovered in over 120 years. The new reef is taller than some of the world’s highest skyscrapers, reaching a staggering 500 meters off the seabed!

It was found in waters off North Queensland by Australian scientists aboard Schmidt Ocean Institute’s research vessel Falkor. The team are currently on a 12-month exploration of the ocean surrounding Australia.

At 500 meters high, the detached reef is taller than the Empire State Building (381 meters to the top floor) and the Eiffel Tower (324 meters to the tip).

The reef was discovered on 20 October as Dr. Robin Beaman and his team completed an underwater mapping of the seafloor of the northern Great Barrier Reef. On 25 October they used an underwater robot called SuBastian to explore the new reef.

Scientists say that the base of reef measures 1.5 kilometres wide then rises 500m to its shallowest depth of only 40m below the sea surface.

There are seven other tall detached reefs in the area, including the reef at Raine Island – the world’s most important green sea turtle nesting area.

“The state of our knowledge about what’s in the Ocean has long been so limited. Thanks to new technologies that work as our eyes, ears and hands in the deep ocean, we have the capacity to explore like never before,” said Wendy Schmidt, co-founder of Schmidt Ocean Institute.

Dr. Beaman, who led the expedition, said he was “surprised” by what they found.

“To not only 3D map the reef in detail, but also visually see this discovery with SuBastian is incredible,” he added.

Dr. Jyotika Virmani, executive director of Schmidt Ocean Institute said: “This powerful combination of mapping data and underwater imagery will be used to understand this new reef and its role within the incredible Great Barrier Reef World Heritage Area.”

What Is The Great Barrier Reef? 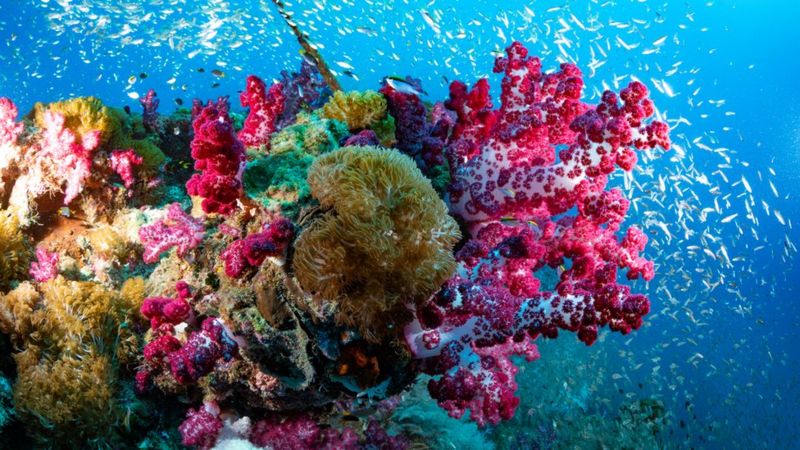 GETTY IMAGE: Check out this colourful snap of the Great Barrier Reef in Queensland, Australia

The Great Barrier Reef is the the world’s largest coral reef and covers nearly 133,000 square miles. It is home to more than 1,500 species of fish, 411 species of hard corals and dozens of other species. Coral reefs are an important underwater ecosystem, often called the ‘rainforests of the ocean’.

‘Great Reset’ – World Economic Forum founder Klaus Schwab in Time Mag: ‘We Need to Reimagine Capitalism’ – Seeks ‘virtuous capitalist system’ that prioritizes reducing greenhouse gases, hiring from ‘diverse backgrounds’ & closing ‘gender pay gap’ (Which only means to give Communism a new name, but it will keep poverty for the masses, censorship of the media, arbitrary imprisonment, persecution, murder and mass graves for both the opposition and the “deplorable.”)