Image: Some examples where weather may have changed history

Related: The Election Day Weather Forecast: Who Will it Favor?

The “Green” Rent & Grant Seeking Activists (below) means “Man Made” Global Warming, which doesn’t exist, there’s not even any “Natural” Global Warming (meaning, the temperature is not increasing). Then how “may” a non-increase in temperature lead to more extremes??

Remember, if it’s not logic, it’s not science either!

h/t Dr. Willie Soon; According to the National Academy of Sciences, if the weather is severe it is partly our own fault. “Global warming can contribute to the intensity of heat waves, drought, and wildfires. It also increases water vapor in the atmosphere, which can lead to more frequent heavy rain and snowstorms. #BasedOnScience”. But they forgot to explain their position appears to differ from the IPCC position.

CLAIM
Extreme weather can be linked to global warming.

FACT
In some cases. Some types of extreme weather events are happening more often or are becoming more intense because of global warming.

As Earth’s climate has warmed, a new pattern of more frequent and more intense weather events has unfolded around the world. Scientists identify these extreme weather events based on the historical record of weather in a particular region. They consider extreme weather events to be those that produce unusually high or low levels of rain or snow, temperature, wind, or other effects. Typically, these events are considered extreme if they are unlike 90% or 95% of similar weather events that happened before in that same area.

Global warming can contribute to the intensity of heat waves by increasing the chances of very hot days and nights. Warming air also boosts evaporation, which can worsen drought. More drought creates dry fields and forests that are prone to catching fire, and increasing temperatures mean a longer wildfire season. Global warming also increases water vapor in the atmosphere, which can lead to more frequent heavy rain and snowstorms. 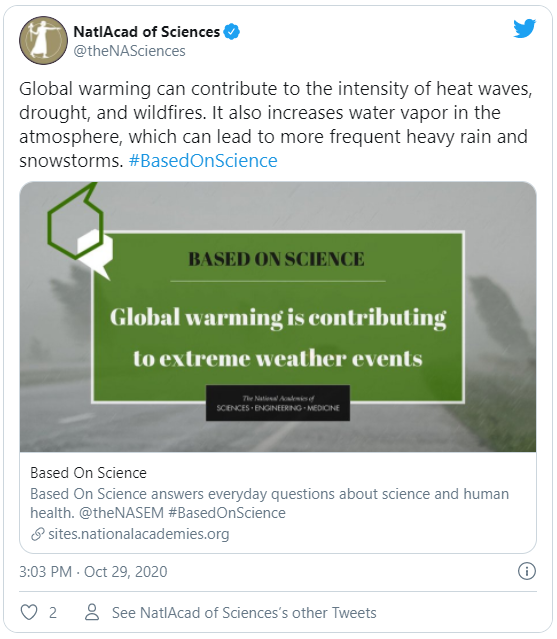 The IPCC, which is supposed to be the gold standard of climate science, takes a less confident view.

There is evidence from observations gathered since 1950 of change in some extremes. It is very likely that there has been an overall decrease in the number of cold days and nights, and an overall increase in the number of warm days and nights, at the global scale, that is, for most land areas with sufficient data. It is likely that these changes have also occurred at the continental scale in North America, Europe, and Australia. There is medium confidence of a warming trend in daily temperature extremes in much of Asia. Confidence in observed trends in daily temperature extremes in Africa and South America generally varies from low to medium depending on the region. Globally, in many (but not all) regions with sufficient data there is medium confidence that the length or number of warm spells or heat waves has increased since the middle of the 20th century. It is likely that there have been statistically significant increases in the number of heavy precipitation events (e.g., 95th percentile) in more regions than there have been statistically significant decreases, but there are strong regional and subregional variations in the trends. There is low confidence that any observed long-term (i.e., 40 years or more) increases in tropical cyclone activity are robust, after accounting for past changes in observing capabilities. It is likely that there has been a poleward shift in the main Northern and Southern Hemisphere extratropical storm tracks. There is low confidence in observed trends in small-scale phenomena such as tornadoes and hail because of data inhomogeneities and inadequacies in monitoring systems. There is medium confidence that since the 1950s some regions of the world have experienced a trend to more intense and longer droughts, in particular in southern Europe and West Africa, but in some regions droughts have become less frequent, less intense, or shorter, for example, in central North America and northwestern Australia. There is limited to medium evidence available to assess climate-driven observed changes in the magnitude and frequency of floods at regional scales because the available instrumental records of floods at gauge stations are limited in space and time, and because of confounding effects of changes in land use and engineering. Furthermore, there is low agreement in this evidence, and thus overall low confidence at the global scale regarding even the sign of these changes. It is likely that there has been an increase in extreme coastal high water related to increases in mean sea level in the late 20th century. [3.2.1, 3.3.1, 3.3.2, 3.3.3, 3.4.4, 3.4.5, 3.5.1, 3.5.2, 3.5.3; Tables 3-1, 3-2]

The answer is Medium Confidence = 50/50. Before climate newspeak, scientists would have used the word “uncertain” or “inconclusive“.

So how did this in my opinion misleading term “medium confidence” come to replace the word “inconclusive” in climate science literature? This is the subject of one of my favourite Climategate emails.

Great Tom, I think we are converging to much clearer meanings across various cultures here. Please get the inconclusive out! By the way, “possible” still has some logical issues as it is true for very large or very small probabilities in principle, but if you define it clearly it is probably OK–but “quite possible” conveys medium confidence better–but then why not use medium confidence, as the 3 rounds of review over the guidance paper concluded after going through exactly the kinds of disucssions were having now. Thanks, Steve

Schneider and pals apparently didn’t want people seeing the word “inconclusive” all over their climate science papers, so they adjusted their language towards using the phrase “medium confidence”.

Translating medium confidence climate newspeak into normal English, the IPCC position appears to be that most claims of climate related extreme weather are inconclusive or unlikely.

Despite their subtle caveats, in my opinion the National Academy of Sciences statement on extreme weather is misleading, unless the academy’s position is substantially different to the IPCC position. For example the IPCC says “low confidence for the attribution of any detectable changes in tropical cyclone activity to anthropogenic influences.”, but the Academy statement said global warming is likely making hurricanes more intense.

If the National Academy of Sciences does not agree with the IPCC position, if their view of climate related extreme weather is more alarmist than the IPCC, they should have explicitly explained this difference of opinion in their statement, instead of presuming to speak on behalf of climate science.