Remember the much ballyhooed paper that made the cover of Nature, Steig et al, “Warming of the Antarctic ice-sheet surface since the 1957 International Geophysical Year”, Nature, Jan 22, 2009 that included some conspicuously errant Mannian math from the master of making trends out of noisy data himself? Well, that just went south, literally.

And it just isn’t because the Steig et al. paper was wrong, as proven by three climate skeptics that submitted their own rebuttal, no, it’s because mother nature herself reversed the trend in actual temperature data in the Antarctic peninsula, and that one place where it was warming, was smeared over the entire continent by Mannian math to make it appear the whole of the Antarctic was warming.

The peninsula was the only bit of the Antarctic that suited the Warmists.  They gleefully reported glacial breakups there, quite ignoring that the Antarctic as a whole was certainly not warming and was in fact tending to cool.  The study below however shows that the warmer period on the peninsula was an atypical blip that has now reversed.

The Antarctic Peninsula (AP) is often described as a region with one of the largest warming trends on Earth since the 1950s, based on the temperature trend of 0.54 °C/decade during 1951–2011 recorded at Faraday/Vernadsky station. Accordingly, most works describing the evolution of the natural systems in the AP region cite this extreme trend as the underlying cause of their observed changes. However, a recent analysis (Turner et al., 2016) has shown that the regionally stacked temperature record for the last three decades has shifted from a warming trend of 0.32 °C/decade during 1979–1997 to a cooling trend of − 0.47 °C/decade during 1999–2014. While that study focuses on the period 1979–2014, averaging the data over the entire AP region, we here update and re-assess the spatially-distributed temperature trends and inter-decadal variability from 1950 to 2015, using data from ten stations distributed across the AP region. We show that Faraday/Vernadsky warming trend is an extreme case, circa twice those of the long-term records from other parts of the northern AP. Our results also indicate that the cooling initiated in 1998/1999 has been most significant in the N and NE of the AP and the South Shetland Islands (> 0.5 °C between the two last decades), modest in the Orkney Islands, and absent in the SW of the AP. This recent cooling has already impacted the cryosphere in the northern AP, including slow-down of glacier recession, a shift to surface mass gains of the peripheral glacier and a thinning of the active layer of permafrost in northern AP islands. 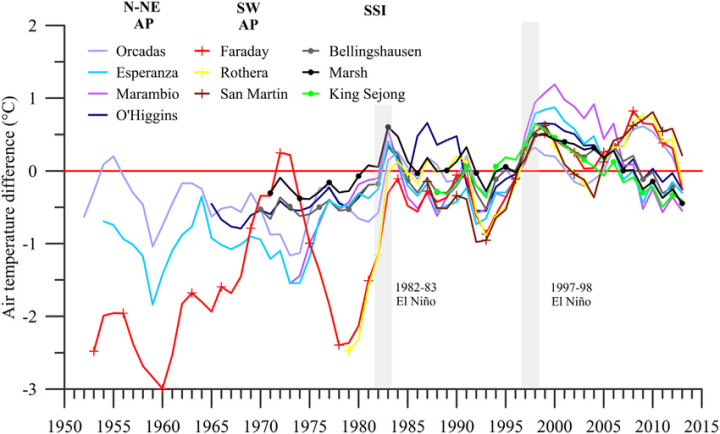 Fig. 4. Temporal evolution of the difference between the MAATs and the 1966–2015 average temperature for each station (3-year moving averages). 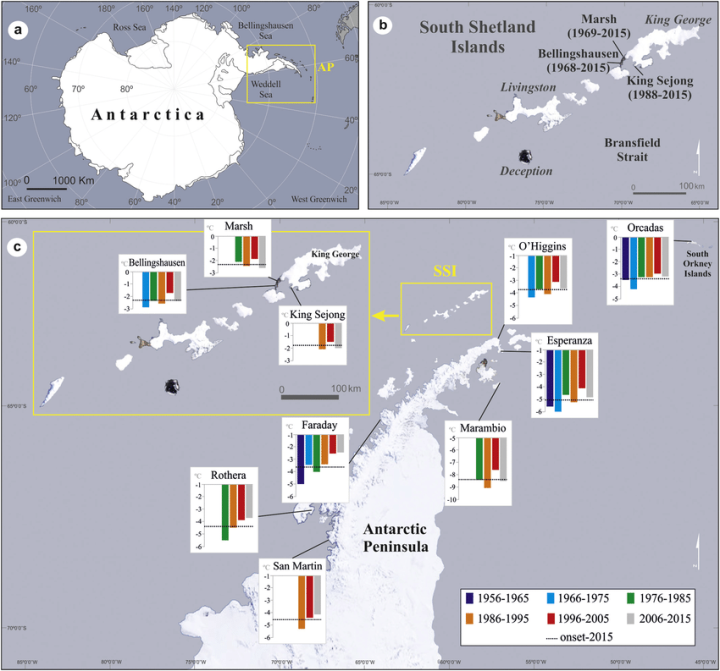 Fig. 1. Location of the AP within the Antarctic continent. b. Detail of the South Shetland Islands and its stations. c. Distribution of the stations on the Peninsula and neighbouring islands, with inter-decadal MAAT variations since 1956 across the AP region.