Image: Henri is the storm we have feared for decades

The wildfires in Greece and Turkey have been hitting the headlines, with the media, politicians, and environmentalists rushing to put the blame firmly on climate change.

The BBC, for instance, has reported in what they laughingly call a Reality Check that ‘parts of Europe and North America could be experiencing the worst fire season ever,’  strongly implying that global warming is to blame.

If they had bothered to check their facts, they would have realized their little theory does not stand up to scrutiny.

For instance, a recent peer-reviewed study in 2016 into wildfire trends around the Mediterranean found that the total area burned per year had been steadily declining since 1985.

The analysis, which included Greece, concluded that the only country to buck the trend was Portugal.

It may have escaped your notice, but Greece has always been very hot and dry in summer: ideal conditions for wildfires. Occasionally there is a big conflagration.

Although this year’s fires have been much worse than average, they have only burnt about half of the area destroyed in the fires of 2007. Similarly, large conflagrations occurred in 1879, 1944, and 1998.

One particular issue in Greece is the depopulation of rural areas. In the past, villagers would collect dead wood and brush from the forests to burn at home. Nowadays much of it is left on the forest floor, making it an ideal fuel for combustion.

In Turkey too, we find that fires used to be much worse in the past. This year’s fires are similar to those of 1945 in terms of area burned: 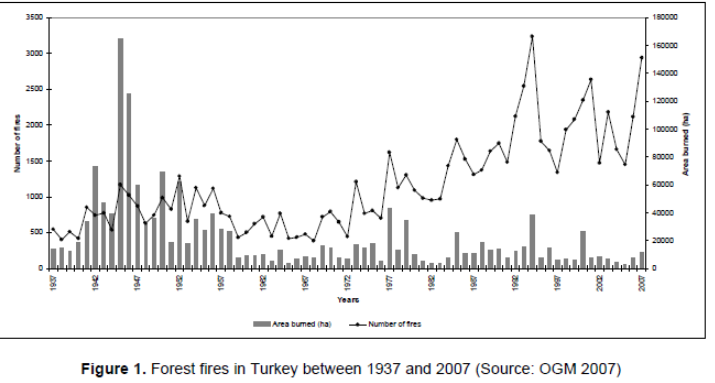 The reason for the sharp decline in the area burned is fire suppression, which began in earnest in the 1960s. But this suppression allows an abundance of dead wood and dry undergrowth to build up, which makes ideal fuel for megafires.

And every fire needs a spark. The Turkish study found that humans were responsible for 93 percent of all fires there. It is of course convenient for Turkey’s President Erdogan to blame climate change, as he has been accused of being unprepared for the disaster.

It is the same story in the US, where despite the BBC’s claims of ‘records’, wildfire acreage is below average so far this year.

Official data shows that fires used to be much worse in the past. But again fire suppression is leading to bigger conflagrations than a few decades ago. 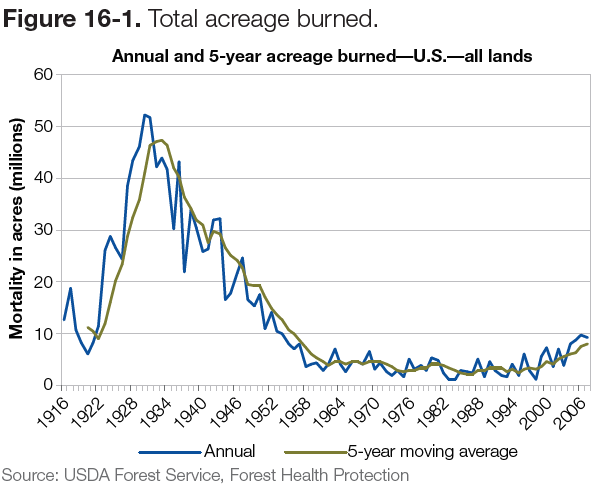 US Dept of Agriculture – National Report on Sustainable Forests – 2010

The bottom line is that climate change is not making wildfires worse. If governments want to avoid these disasters and save lives, they need to make sure that their forests are properly managed.

There has been some welcome news in the last few days that the government is backing away from its plan to ban all sales of gas boilers from 2035.

Latest reports suggest they will replace it with an ‘ambition’ to ensure that homeowners do not face significant costs. (In other words, kicking the can down the road, as all previous governments have done!)

This backdown has been prompted by a rebellion of Red Wall MPs, who are horrified by the costs to householders of the ban.

Unlike most of their colleagues who belong to the metropolitan bubble, most of them understand what is going on in the real world.

They are dead right. There has been a lot of disinformation about the costs of the heat pumps which will be needed instead.

Industry figures confirm that the installation of air heat pumps could cost around £18,000 for a typical detached house.

On top of this, most houses will need to replace radiators and upgrade insulation, which will add thousands to the bill.

It has been suggested by the anti-fossil fuel lobby that lower running costs should offset this extra cost. But anybody with a gas boiler will find their heating bills double because electricity is five times the price of gas.

Hopefully, attention might now turn to electric cars and the ban on petrol/diesel in 2030. Electric cars typically cost £10,000 more than the petrol equivalent and are totally unfit for purpose for most drivers.

That is why, despite lifetime subsidies of about £10,000, hardly anybody has bought a plug-in car yet.

There is no sign either that prices will drop significantly soon, particularly given the upward pressure on rare earth prices.

This all raises the question of why the government has been so badly advised on these issues. It has, after all, been obvious to many of us for a long while that their Net Zero plans would be ruinously expensive for the ordinary people of this country.

The blame has to begin with John Selwyn Gummer’s Committee on Climate Change, which is supposed to be ‘independent’. It is no such thing, instead, it’s part of the climate activist lobby, more interested in what Greenpeace has to say than the wellbeing of the British public.

Finally, the media must take their share of the blame for their failure to challenge official advice and policy, and instead simply cut ’n’ paste handouts from the renewable lobby.

The media were quick on Sunday gleefully to declare a supposed new record temperature of 47.2C in Spain.

Inconveniently, it turns out that higher temperatures have been recorded in the past, such as 47.8C at Murcia in 1976. Somehow these have been ‘disappeared’ from the record books.

The new ‘record’ was set at a hydro dam near the small town of Montoro, near Cordoba. Those of a skeptical mind might be a tad suspicious that the previous record was set at the same weather station in 2017. They would be right to be suspicious.

Shortly after the 2017 record, detective work discovered that the temperature equipment there had been poorly maintained. The Stevenson screen, which is supposed to be white to reflect the sun, was brown as the paint had flaked away.

The screen was much too close to vegetation, thus blocking the wind, and was also close to a concrete building. To cap it all, one of the screen’s doors appears to be missing, allowing the sun to shine in.

Any of these faults should automatically disqualify any record temperatures.

This photo was admittedly taken four years ago, and maybe all of the problems have been put right. But I would not hold my breath. Full article ..