Image: Please don’t drain actual swamps — where else would the crocodiles live?

It’s been long known that NASA GISS has been going through its historical temperature data archives and erasing old temperature measurements and replacing them with new, made up figures without any real legitimate reason.

This practice has led to the formation of new datasets called “adjusted” data, with the old datasets being called “V3 unadjusted”. The problem for global warming activists, however, was that when anyone looks at the old “V3 unadjusted” – i.e. untampered data – they often found a downward linear temperature trend. Such negative trends of course are an embarrassment for global warming alarmists, who have been claiming the planet is warming up rapidly.

So what to do? Well, it seems that NASA has decided to adjust its “V3 unadjusted datasets” and rename them as “V4 unadjusted”. That’s right, the adjusted data has become the new V4 “unadjusted” data.

And what kind of trend does the new “V4 unadjusted” data show?

You guessed it. The new V4 unadjusted data are now yielding warmed up trends, even at places where a cooling trend once existed.

This is how NASA uses its magic wand of fudging to turn past cooling into (fake) warming.

6 examples of scandalous mischief by NASA

What follows are 6 examples, scattered across the globe and going back decades, which demonstrate this scandalous mischief taking place at NASA.

Punta Arenas, Chile. Here we see how a clear cooling trend has been warmed up by NASA to produce a slight cooling trend:

Port Elizabeth, South Africa. Here this 1o9 year old dataset has been altered to transform a no warming trend into a warming trend:

Davis Antarctic. Data from the Japan Meteorological Agency, for example, show how this station has no trend, as do NASA’s V3 unadjusted data. But now NASA’s new V4 “unadjusted” data show that warming has arrived in Antarctica after all:

Hachijojima, Japan. The unadjusted V3 data from this remote island station used to show no trend – before NASA decided to create a new “unadjusted” dataset. And presto! We now have warming where none previously existed:

Valentia Observatory, Ireland. Here we see how parts of the past were cooled, while more recent mean temperatures were warmed up. Not to our surprise, what results is more warming.

At NASA the sun, oceans, water vapor, etc. don’t seem to matter when it comes to global temperature trends. The number one factor behind the “warming” at NASA appears not even to be CO2 but rather their Orwellian data fudging. At NASA, if the data do not agree with the (bogus) models, then just got back and change them!

Temperature doesn’t rise, or spike in large areas of the globe because of local conditions, there has to be cosmic influences, like the Milankovitch cycle, sun’s activity / cycles, cosmic rays etc.

Common for the cosmic influence is the fact that it can’t be registered only locally, it has to be global, even galactic, and looking at the unadjusted data, – it’s exactly what it shows. The 30’s was warmer than today – globally. 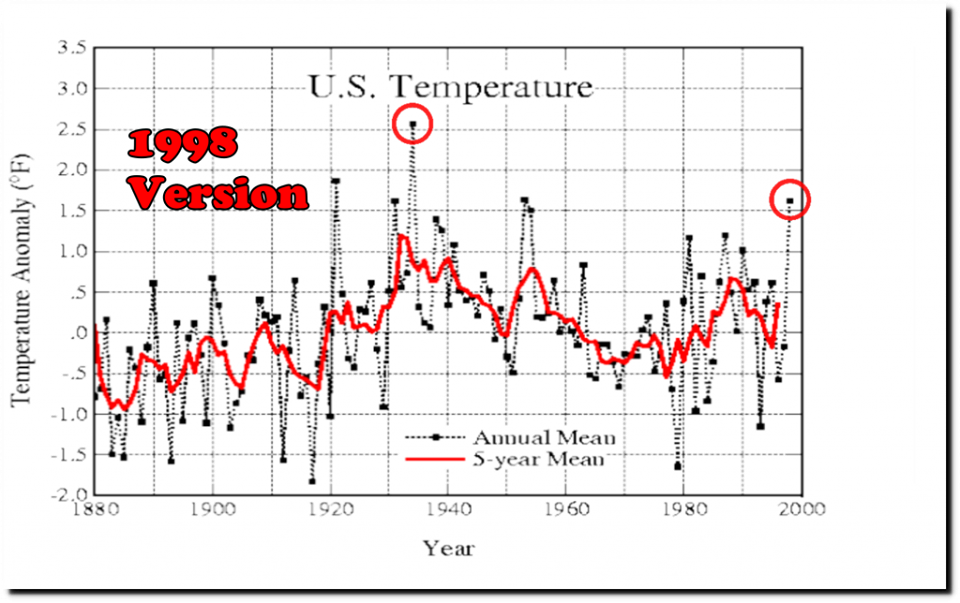