This is a typical example of how the left is being controlled by special interest (not science) and the rest of us end up paying for their corruption.

Remember Alexandria Ocasio-Cortez told us a few months ago we only had 12 years left to “save the earth”? Amateur!

Three Months To Save The Earth!

Yeah, and it is just as FAKE! (But they are not as smart as the original Nazis, tell A LIE – Big lie – and tell it often enough for people to start believing them – But here’s the key, you have to tell the same lie ..)

The European Union’s Earth observation program said Tuesday that the ozone hole over Antarctica has swelled to its largest size and deepest level in at least 15 years, to become among the most notable ever recorded.

Clare Nullis of the WMO explains that the ozone hole begins to expand every August –at the start of the Antarctic spring– and reaches a peak around October. “The air has been below minus 78 degrees Celsius, and this is the temperature which you need to form stratospheric clouds — and this is quite a complex process,” said Nullis at a U.N. briefing. “The ice in these clouds triggers a reaction which then can destroy the ozone. So, it’s because of that that we are seeing the big ozone hole this year.”

These findings completely contradict the science behind the international accord (the Montreal Protocol) devised to phase out the use of ozone-depleting substances (OSDs). In addition, they also confirm what NASA has been saying for years: that the upper atmosphere is cooling.

OSDs have been on the decline since their peak in 2000 (shown below), and the “hole” growing –to among the largest ever recorded– a full 20 years later shows the correlation between OSDs and ozone is minor, at best. 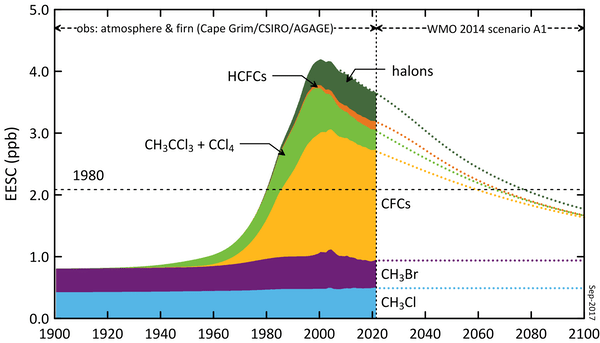 Past and predicted levels of controlled gases in the Antarctic atmosphere, quoted as equivalent effective stratospheric chlorine (EESC) levels, a measure of their contribution to stratospheric ozone depletion.

The formation of stratospheric ozone is initiated by ultraviolet (UV) radiation coming from the Sun. As a result, an increase in the Sun’s radiation output increases the amount of ozone in Earth’s atmosphere. The Sun’s radiation output and sunspot number vary over the well-documented 11-year solar cycle. Observations over several solar cycles since the 1960s show that global total ozone levels vary by 1 to 2% between the maximum and minimum of a typical cycle. However, ‘global’ total ozone levels aren’t necessarily what we’re interested in here. Evidence suggests that ozone depletion during times of low solar activity is far greater above the poles than elsewhere on the planet, a phenomenon we’re seeing today, at both the Antarctic and Arctic.

This could well be the true cause of Polar Amplification. Climate alarmists, of course, love to claim that CO2 is disproportionately warming the Arctic, but they have no agreed-upon mechanism as to how this could occur. It is fantasy. On the other hand, a positive correlation between decreasing solar activity and ozone depletion above the Arctic fits almost perfectly, as does the negative correlation between ozone depletion and rising surface temps.

There is another important forcing to factor into all this: volcanic eruptions.

Chile’s Calbuco volcanic eruption (2015) is another. This stratospheric injection played a role in enhancing the size of the ozone hole back in 2015. 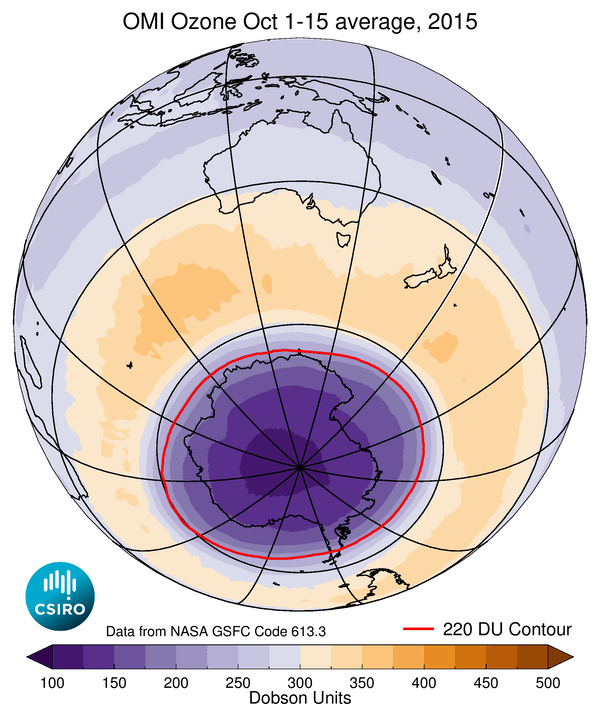 2020’s hole appears even larger that 2015’s, clear indication that factors other than ODSs are key to ozone depletion above the poles — namely, surprise-surprise, solar and volcanic activity.

Unfortunately, the U.N. and its fraudulent little offshoot, the WMO, remains chained to the Montreal Protocol. Clare Nullis says that despite this year’s growing hole, experts still believe the ozone layer is slowly recovering after adoption of the accord in 1987, and she urges nations to stick to the measures, citing climate projections that indicate that the ozone layer will return to 1980 levels in 2060.

Furthermore, we can’t ignore the slew of new scientific papers stating the immense impact The Beaufort Gyre could have on the Gulf Stream, and therefore the climate overall.

Jackson Hole, WY: 2019 was the Coldest year on Record, 2020 saw the Earliest Snowfall on Record — note the trend