Special ice warning in effect.
Bergy water except 7 tenths of first-year ice including a trace of
old ice in the northern section. Unusual presence of sea ice.

Arctic ice had a remarkable May. The April NH ice extent in April was a 343k km2 deficit below the decadal average, and May ended with a monthly average surplus of 131k km2. The graph below shows in recent weeks how 2017 took a lead of ~300k km2 above average and is holding it entering June.

The graph below excludes the Pacific seas of Okhotsk and Barents, which are melting early (~150k km2 below average) and distort what is happening in central and Atlantic Arctic seas.

Good news for the Iceberg Festival, for the Fishermen not so much. 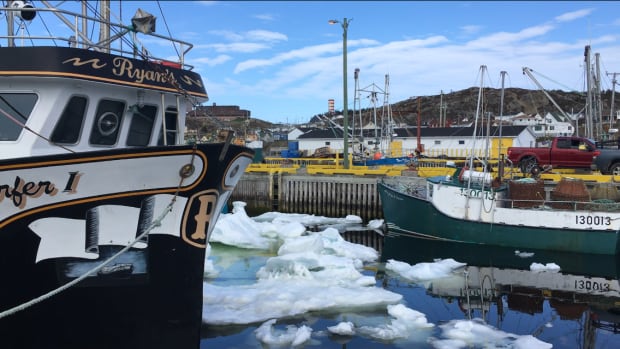 Ice has started to break up near the wharf in Twillingate, but it could take another couple of weeks before boats could come and go freely. (Garrett Barry/CBC)

The town hasn’t seen ice last this long for decades, according to Gord Noseworthy, mayor and harbour master. It means many boats can’t get out of Twillingate, and those that do aren’t coming back to the wharf.