At this point last year global warming alarmists and global socialism politicians were as giddy and as optimistic as ever. Everything was falling into place as it looked as if nothing would prevent them from imposing their green regime. The Pope was on their side, global temperatures had been near record highs (thanks to an El Nino event) , and Hillary Clinton would surely go on to become President of the USA.

With Clinton at the helm, the US would wholeheartedly commit to Paris and to strict decarbonization. Never did the green dream look so promising. But then came the mother of torpedoes, President Donald Trump.

And now there’s yet another torpedo about to slam into the already badly damaged warmunista ship: a rapidly approaching La Nina. In the wake of last year’s El Nino event, global temperatures had already been falling. A La Nina will only cause the globe to cool further. This is surprising because just months ago experts had predicted El Nino conditions to return.

The global warming alarmists are in sheer desperation and panic, as made evident by their hysterically shrill reactions to the recent hurricanes. The latest forecast shows a return to La Nina conditions (and a global cool-down).

The above chart shows La Nina conditions expected to persist into spring, 2018. This cooling will make itsself evident in satellite data with a lag of about 6 months. This means global temperature will fall even further next year, which means the warming pause will go beyond 20 years.

Note the intensifying La Nina conditions forecast for the end of the here in the following NCEP chart for the rest of the year:

La Niña means extreme winter weather — colder global temperatures — and all sorts of interesting things. Are you prepared for it? 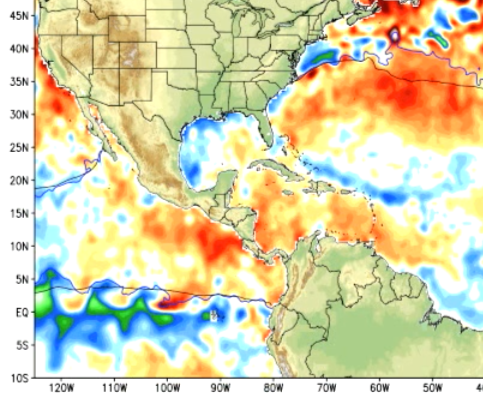 Note the band of cool water through the Caribbean and a substantially cooled down Gulf of Mexico. Just a week ago reports abounded on how the waters there surface had been “bathwater warm”. So quickly can weather change. True, there remains considerable amounts of heat at the ocean surfaces.

The recent winter projection for Europe issued by Meteociel below shows Europe possiby being gripped by a frigid winter. If the prognosis holds, it could be one of the coldest in years:

Meteociel/CFS prognosis from 30 August 2017,  850 hPa temperature deviation from the mean (about 1500m) in Europe for the 2017/18 winter. For Europe very icy conditions are expected (from left to right: December, January, February). Source: www.meteociel.fr/php

Also the Arctic has shown recovery over the past years. This year’s Arctic sea ice for mid September is about a full 1 million sq. km. over the record low set 5 years ago.