If global warming is real and a threat to the world, why do people keeping temperature records keep “adjusting” or “rectifying” the data to make it look like warming is increasing?

From Down Under, a member of the federal House of Representatives named Craig Kelly — a member of the Liberal Party, which is conservative — has caught that nation’s Bureau of Meteorology altering graphs showing the number of very hot days so as to obscure the fact that 1952 had more of them than recent years and adding a newly “discovered” hot day to a more recent year to make it appear that they are increasing. 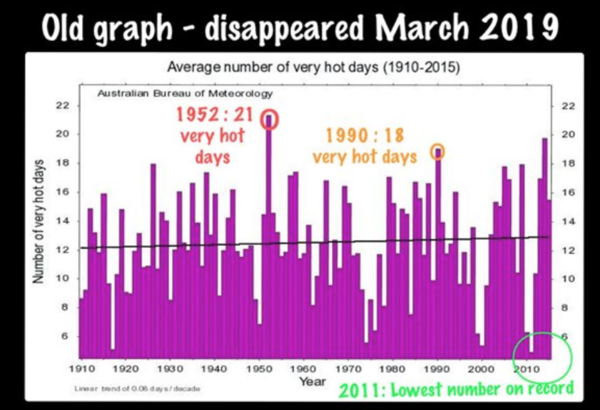 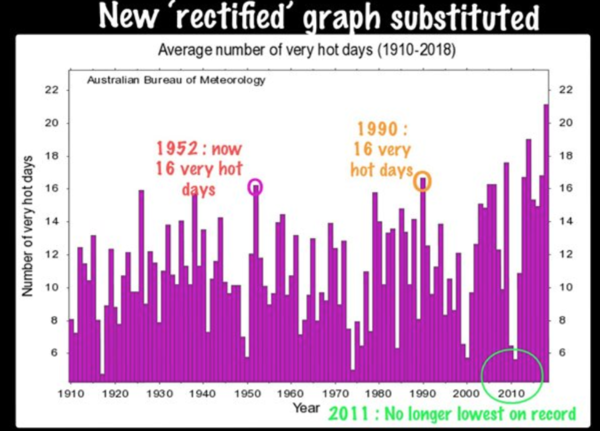 Not only did the Bureau’s graph showing the year 1952 as having the highest ‘number of very hot days’ (and the year 2011 with the lowest number) disappear down a memory hole — but a new ‘rectified’ graph has appeared in another section of their website.

And surprise, surprise — the year 1952 no longer has the highest ‘number of very hot days’. The old graph recorded 21 very hot days in 1952, while the new ‘rectified’ graph shows only 16 very hot days.

Further, for the year 2011 — which embarrassingly for Alarmists previously had the lowest ‘number of very hot days’ going back to 1910 — the Bureau has skilfully been able to find another very hot day for 2011, (I wonder where it was hiding ?) so that year no longer holds the lowest record !

”There were the vast repositories where the corrected documents were stored, and the hidden furnaces where the original copies were destroyed. And somewhere or other, quite anonymous, there were the directing brains who co-ordinated the whole effort and laid down the lines of policy which made it necessary that this fragment of the past should be preserved, that one falsified, and the other rubbed out of existence.