I’m not going to repeat the description of alarmist radiative physics in their simulacrum version of the greenhouse effect, because readers should already know by now how that argument goes.  What I will do instead is put that argument in terms of conduction.  (Note that the colour codes below represent increasing temperature in terms of RYGBV.)

1) Start with a cold metal rod insulated around its circumference which is then heated at one end.  The end of the rod opposite to that being heated is not insulated.

2) As the heat transfers down the rod, the molecules which now have increased thermal energy can vibrate in any direction.

3) When they randomly vibrate back toward the direction of the heat source, they bump into molecules closer to the heat source which are also warmer due to the temperature gradient established from heat conducting down the rod.

So how does that strike you?  Have you ever put a cold metal block against something only to find that the thing gets hotter?  Of course that doesn’t happen.  Imagine how useful that would be if it did happen?!  Industrialization is all about the practical application of thermodynamics and in getting temperature gradients to do work for you.  This would be useful if either conductive or radiative heat transfer worked this way.  They don’t.  You cannot increase temperature without doing work (heat is equivalent to work)!

The reason is because both “physical” and “radiative” heat transfer are mediated by the exact same underlying fundamental force of physics: electromagnetism.  In both cases of physical heat transfer and radiative heat transfer, the mediating particle is the photon.

We all should know by now that there is no real such thing as “rubbing up” or “bouncing off” from hard little particles in physical contact as such; rather, there are electromagnetic fields which exchange photons and this exchange of information results in impulse reactions which we call force, and which result in friction, or reactionary motion, or heat flow, etc.  In terms of the fundamental forces of physics, there is no difference in the mechanism of physical heat transfer vs. radiative heat transfer, because it is electromagnetism and the exchange of photons which is exclusively at work.  This is why there is no caveat in the Laws of Thermodynamics that radiative heat transfer may manifest different over-all behaviour as compared to physical heat transfer.

For what it’s worth, the actual end-state of the heat source and metal rod is shown in the next diagram.

The above diagram represents the definition of thermal equilibrium.  The conductive and radiative heat flow equations take on forms like Q = k(Th – Tc), or Q = σ(Th4 – Tc4) respectively.  One can see that they are qualitatively the same, as in heat flows from hot to cold only, and one must also understand that the only way we have to solve these equations to determine the end-state, i.e. thermal equilibrium, is by setting them (Q) equal to zero.

We have never ever encountered a climate alarmist claiming the existence of back-conductive warming.  Why is that?  Why not?  After-all, it would have been totally consistent for them to do so: given that it is the same underlying force of physics, they would have been entirely consistent in claiming back-conduction warming along with back-radiation warming, and the argument for either is exactly the same.  It is so telling that they’ve created this inconsistency here!

If the alarmist physics was consistent then it would argue for the existence of back-conduction as well, however we have never witnessed them doing so.  But either way, if one splits the rod with it starting from either the back-conductive scenario or the non-back-conductive scenario, the result in either case is that by the simple expedient of cutting the rod in half, one can increase the temperature of half of the rod!  The reason is because of the climate alarmist radiative greenhouse effect operating by radiation in the vacuum gap between the bar-halves.

We don’t so much care here anymore as to whether back-conduction warming exists (it doesn’t), rather the important result in either case is that if we simply cut the rod in half in order to create a vacuum gap for radiation to mediate heat there, then the climate alarmist greenhouse effect should increase the temperature of the bar closest to the original heat source.  Wouldn’t that be an amazing and useful result?  Simply cut a heat conductor in half, create a small vacuum gap between facing ends within the heat conductor, and half of the conductor will become hotter.  Cut something in half, get higher temperature!  And actually, the temperature of the rod closest to the heat source will increase directly as a function of the number of cuts in the rod!

And of course, the flat Earth climate alarmist movement is nothing but an attack on reason itself.  It’s meant to be inconsistent, because that’s how the negative dialectic is applied in order to render a mind unconscious and unable to think.

The inconsistency of climate alarm “physics” is its FEATURE, not its problem!

These kind of misunderstandings can lead to a lot of things. I just had to make a screenshot of a comment by an alarmist a while back. Read it, when you see it you’ll be rolling on the floor .. 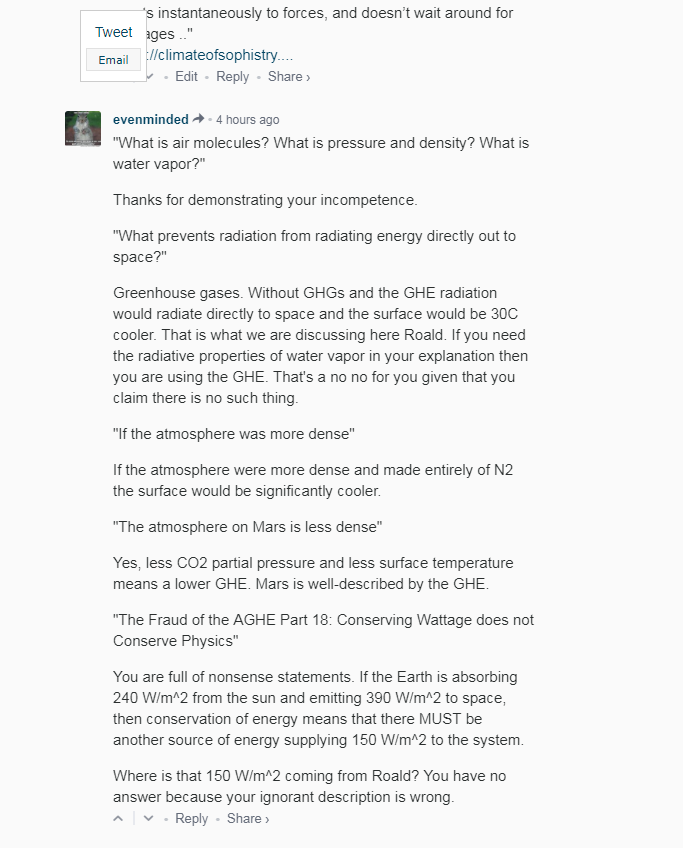 Correction from the original post. First sentence, the word “simulacral” corrected to “simulacrum”.