Anis Amri was arrested three times this year and his asylum application was rejected, but deportation papers were never served and he disappeared.

A European arrest warrant from Germany, indicates that Anis Amri (pictured above) has at times used six different aliases and three different nationalities. German police were tracking him for months amid fears he was involved in an earlier terrorist plot – but lost him before the Berlin Christmas market massacre.

The Tunisian radical was known to be a supporter of Islamic State and to have received weapons training.

He tried to recruit an accomplice for a terror plot – which the authorities knew about it – but still remained at large.

It also emerged that he served four years in an Italian jail after he set fire to a school.

Armed police tonight stormed two apartments in the hunt for the Berlin terror attack suspect after it was revealed he had been under the surveillance of German intelligence agencies for several months.

Commandos raided two addresses in Berlin as police launched a Europe-wide search for Tunisian national Anis Amri, who remains on the run more than 48 hours after the atrocity which claimed 12 lives.

German security services face difficult questions after it emerged that Amris, a lifelong criminal, should have been deported months ago.

The 23-year-old, who has a 100,000 euro reward under his head, was under the surveillance of German intelligence for several months following his arrival in the country last year.

He was arrested three times this year and his asylum application was rejected, but deportation papers were never served and he disappeared. 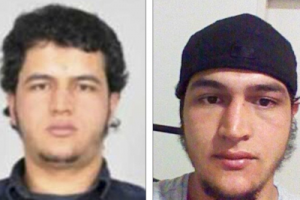 The Tunisian radical was known to be a supporter of Islamic State and to have received weapons training.

He tried to recruit an accomplice for a terror plot – which the authorities knew about it – but still remained at large.

It also emerged that he served four years in an Italian jail after he set fire to a school.

Today his family, who remain in Tunisia, said Amri ‘deserves every condemnation’ if he is guilty of the massacre. His parents are being questioned by police as continue to try and track down the fugitive.

Berlin prosecutors announced they had launched an investigation into Amri on March 14 after receiving a tip-off from federal security agencies.

It was claimed, Amri was planning a string of break-ins or robberies to purchase automatic weapons for use in a terror attack.

Surveillance showed that Amri was involved in drug dealing in a Berlin park and involved in a bar brawl, but no evidence to substantiate the original warning. The observation was called off in September.

He arrived in Germany in July 2015 and was given a hearing by immigration authorities in April this year. He was denied the right to asylum and was due to be deported before the end of the year.

But under a peculiarity of the German asylum system he was granted a ‘Duldung’ or toleration papers allowing him to stay for unknown reasons.

According to BILD newspaper the German authorities were in touch with their Tunisian counterparts to get him a passport so he could be kicked out. But Tunis said it had no record of him being a citizen.

Tunisia has now been accused of delaying his extradition as it emerged that new ID papers had only just arrived in Germany today – two days after the carnage.

Amri was put on a danger list shortly after arriving – a move which meant authorities considered him prone to extreme violence. Yet just how much surveillance he was under remains unclear.

In July this year he got into a knife fight over drugs and was charged with GBH. But he went underground before getting to court.

Yet he surfaced again in August in Ludwigsburg when he was arrested for possessing a fake Italian document. Again, why he was allowed to slip through the fingers of the security services, given his known affiliation to hate preachers, is unclear.

Before his vanishing act he had contact with Salafist preachers who promoted Jihad among German young men who converted to Islam.