Image: We Call Bull$hit: Joe Biden Couldn’t Get 10 People at a Campaign Rally But He Somehow Breaks the Record for the Most Candidate Votes in US History? No Way 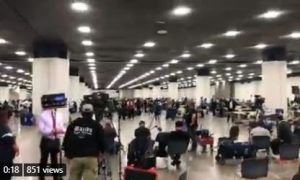 Our source inside the TCF Center in Detroit, Michigan continued to send us updates throughout the day.

From earlier reporting —
State election leadership are preventing GOP poll watchers in downtown Detroit at the TCF Center from entering the former Cobo Center due to claims of COVID.

There was a GOP watcher at nearly each table in the center by late morning.

But after lunch break that all changed.  Detroit officials blocked GOP poll workers in to the center after they went to lunch.

Our contact says the Democrat operatives are very hostile and threatening.

Vote counters with BLM masks and racial justice clothing are allowed into the center but GOP observers were blocked from entering.

Police were then called to block the entrance!

We previously posted video of a poll watcher unable to obtain the COVID requirements the Democrats were relying on to prevent Republican poll watchers in the room where the ballots were being counted:

Now this…
There is now video of Detroit election workers cheering every time a GOP election monitor was removed from the TCF Center today.

Trump Campaign: We Won Pennsylvania, On Track to Win Re-election by End of the Week